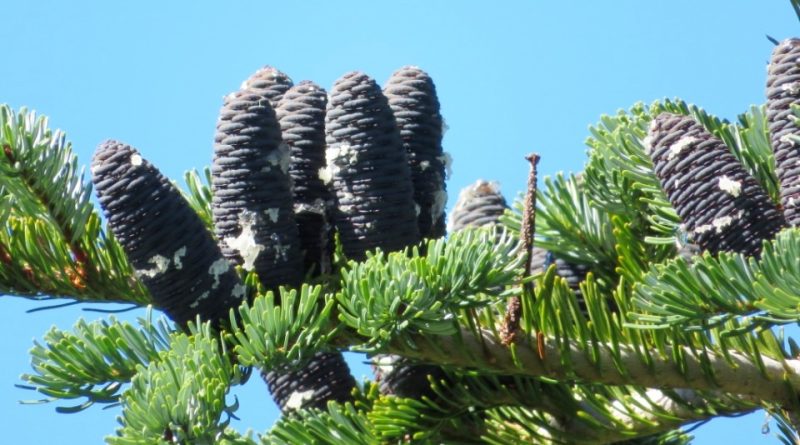 The Maries’s fir (Abies mariesii Mast.) Is an arboreal species belonging to the Pinaceae family.

Etymology –
The term Abies comes from Abies which is the classical Latin name (Virgil, Egloghe, from the Sanskrit root abh gush of resin); according to another interpretation it would derive from the Greek word ἄβιος = long-lived.
The specific epithet mariesii was given in honor of the English botanist Charles Maries (Hampton Lucy, 18 December 1851 – Gwalior, 11 October 1902).

Geographic Distribution and Habitat –
Abies mariesii is a conifer native to the central and northern mountains of Honshū, Japan.
Its natural habitat is that at heights from 750 to 1,900 m a.s.l. in northern Honshū and from 1,800 to 2,900 m a.s.l. in the central one, on soils largely of volcanic origin; the reference climate is that of temperate rainforests with high rainfall, cool and humid summers and winters with heavy snowfalls. Sometimes it forms pure forests, but more frequently it is found in mixed forests in association with Abies veitchii, Tsuga diversifolia, Picea jezoensis, Pinus pumila, Juniperus communis, Betula ermanii, Sorbus commixta and spp. of the genus Acer. 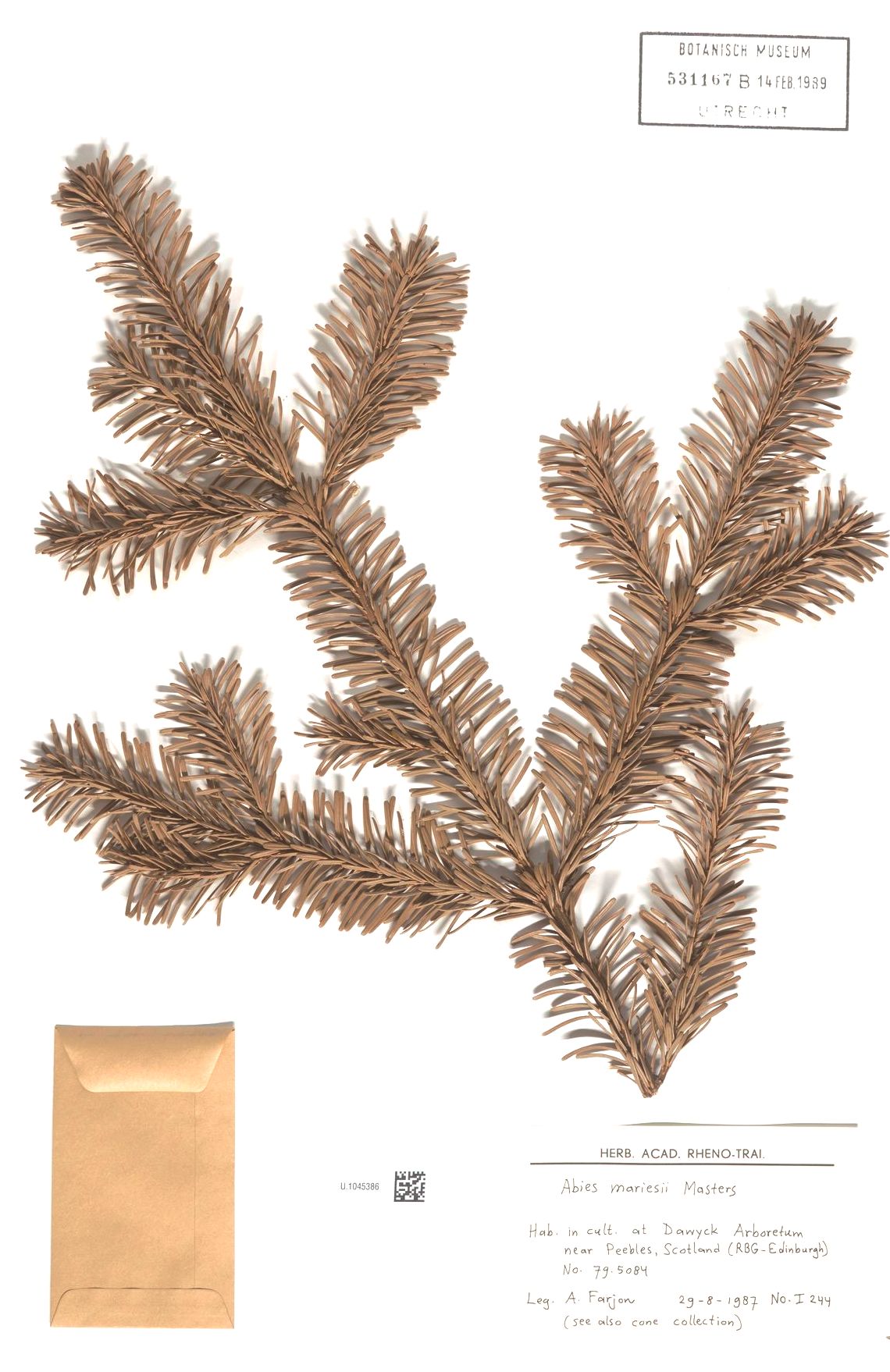 Description –
Abies mariesii is a medium-sized evergreen conifer, which grows up to 24-26 m in height from the ground with a trunk that can reach 2 m in circumference, sometimes in a shrubby form and narrow and conical crown.
It has needle-like, flat leaves, 1.5 to 2.5 cm long and 2 mm wide, 0.5 mm thick, dull dark green in the upper part with two white stoma strips in the lower part and slightly indented at the tip. These are present in a spiral with each needle facing differently so that they are on each side but all in the upper area of ​​the individual branches; these are orange-red in color with dense velvety pubescence.
The female cones are 5 to 11 cm long and 3 to 4 cm wide, dark red in color before ripening; the scaly bracts are short and hidden in the closed cone.
The winged seeds are released when the cone disintegrates upon ripening, approximately 6–7 months after pollination.
Abies mariesii is strongly related to Abies amabilis which grows on the North American coasts of the Pacific Ocean, which is distinguished by its slightly longer needles (2–4.5 cm) and wider cones (9–17 cm ).

Cultivation –
Abies mariesii is an evergreen tree that is used in nature for the local use of its wood.
The plant is also cultivated as an ornamental but more rarely than other conifers.
For its cultivation it should be taken into account that it is a plant of the mountainous regions of the temperate zone, with a cold climate, with abundant winter snowfalls and cool and humid summers and annual rainfall that can exceed 2,000 mm. Frequent typhoons are a destructive force that reduces the maximum age of trees.
In the dormant state it is a species that tolerates very cold but the new vegetation is affected by late frosts.
From a pedological point of view, it prefers a well-structured, moist but well-drained soil, even on clayey soils, and prefers slightly acidic conditions up to a pH of about 5.
It is a very shade tolerant plant, especially when young, but growth is slower in dense shade; on the other hand, it is intolerant to atmospheric pollution.
It prefers to grow on a north-facing slope and is a plant that often grows rather slowly, with an average increase of less than 30 cm per year in height.
Propagation occurs by seed with sowing in late winter in a greenhouse or outdoors in early spring.
Germination is often poor, usually taking about 6 – 8 weeks. Stratification is said to produce more uniform germination, so it is recommended that the seed be sown in a cold seedbed as soon as it is ripe in the fall.
The seed remains viable for up to 5 years if well preserved.
The seedlings must be transplanted in the open field when they are quite small, between 30 and 90 cm in height, as larger trees have difficulties in rooting, root system formation and less wind resistance.

Customs and Traditions –
The Maries’s fir was discovered by the English botanist Charles Maries who subsequently introduced it to England in 1879. This plant in Japanese is called: オ オ シ ラ ビ ソ or ア オ モ リ ト ド マ ツ, Oh-shirabiso, or Aomori-todomatsu.
According to the story in “Hortus Veitchii”, the collapse occurred while he waited in Aomori on the main island (Honshū) for a steamer to take him to Hakodate on the island of Hokkaido: it was there that Maries noticed a new conifer for him growing in a garden and learned that it could be found in abundance on a nearby mountain. He went in search, and reached a height of 3,500 feet, when it became obvious that the bamboo patch formed an impassable barrier on that side of the mountain, and reluctantly had to turn back, although the object of his search could clearly be seen. . The next day he made the ascent again, but this time from the north side, and managed to get hold of the cones of this new species, which was later named by Doctor Masters, Abies mariesii.
The main use of this conifer has historically been only that of wood, albeit marginally.
The wood is strong, light, straight-grained, which polishes well. It is used for construction, pulp, tools, etc.
Its wood is scarcely used due to the difficulty of accessing the growing area. Very demanding in terms of well-drained and humid soils, it is also of little importance in horticulture despite its ornamental qualities, being found only in specialized botanical gardens.
Although restricted to high altitudes, the distribution and regeneration of this species seems to guarantee the survival of this species, so much so that it is not considered threatened. The plant is classified as “Least Concern” on the IUCN Red List of Threatened Species (2013).

Preparation Method –
The Abies mariesii is a conifer that, also due to its limited range and difficult to access, has little interest both for its wood but also in the ornamental field.
On the other hand, no pharmaceutical or food uses are known.