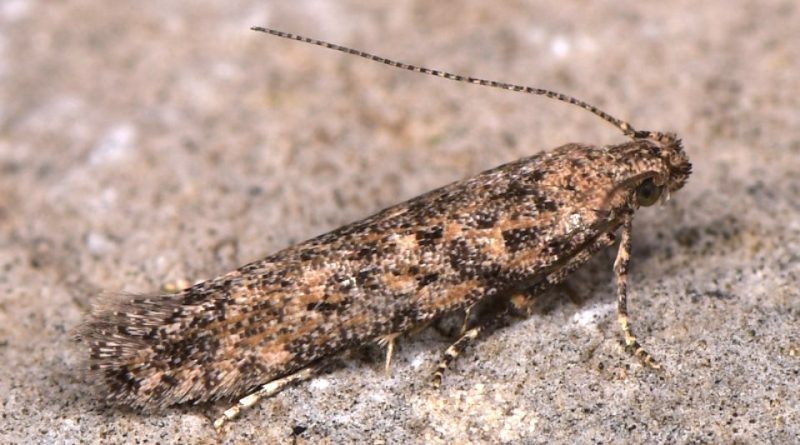 The South American tomato pinworm (Tuta absoluta Meyrick, 1917) is a moth belonging to the Gelechiidae family.

Geographic Distribution and Habitat –
Tuta absoluta is a moth native to South America and widespread in Europe, Africa, Western Asia and South and Central America.
This insect was originally described in 1917 by Edward Meyrick as Phthorimaea absoluta, on the basis of individuals collected from Huancayo (Peru); subsequently, the parasite was reported as Gnorimoschema absoluta and as Scrobipalpula absoluta (Povolný) or, again, as Scrobipalpuloides absoluta (Povolný). Only in 1994 was it described as a Povolný Suit.
The habitat of this insect is that of temperate and warm areas where plants of: potato, eggplant, tomato, pepper and tobacco grow spontaneously or cultivated, but also others such as: Datura stramonium, Lycium chilense and Solanum nigrum. Finally it has also been found on plants other than solanaceae such as: Amaranthaceae, Convolvulaceae, Fabaceae and Malvaceae.
In these plants, especially in intensive systems and for commercial crops such as tomatoes, it can be a serious parasite with the larvae causing a loss of up to 100% if not effectively controlled.

Morphology –
The South American tomato pinworm is a moth, whose adults are about 5-7 mm long and have a wingspan of 9-11 mm, with silvery gray front wings with dark stripes and gray hind wings and with filiform and ringed antennae,
The larvae vary in color from light yellow to dark gray, with a brown head. Late larvae are green or pinkish.
The pupae, which have a length of 5-6 millimeters, are cylindrical and greenish when newly formed, and become darker in color as they approach the emergence of the adult.
The eggs are yellow.

Attitude and Life Cycle –
The larvae of Tuta absoluta voraciously feed on tomato plants, among others, producing large galleries in the leaves, burrowing into the stems and consuming the apical buds and green, ripe fruit.
Its life cycle includes four stages of development: egg, larva, pupa and adult which follow each other over a period, depending on the climatic conditions, ranging from 26 to 75 days.
Adults usually lay eggs on the underside of leaves or stems and, to a lesser extent, on fruits.
Each female lays around 250 eggs during her lifetime. The larva pupates on the ground and more rarely in mines on the leaves.
After hatching, the young larvae penetrate the leaves, aerial fruits (such as tomatoes) or stems, where they feed and develop.
The parasite has mainly nocturnal habits, and the adults usually remain hidden during the day, showing a greater morning-twilight activity with the adults dispersing by flying among the crops.
Furthermore, the larvae do not diapause and are therefore present throughout the year, completing 10-12 generations. The biological cycle is influenced in its duration, as mentioned, by the temperature (15 ° – 30 ° respectively) (the optimum is 27 ° C).
The most attacked species seems to be that of the tomato.
The tunnels dug by the larvae can later be invaded by other secondary pathogens. The presence of tunnels in the stem causes an alteration in the development of the entire plant. On the leaves, the affected part is only the mesophyll and not the epidermis which remains intact. The mined leaves take on a transparent appearance. The phytophagous prefers apical buds, flowers and fruits. It affects only the epigeal part of the plant. Determines both direct and indirect damage. It damages all the epigeal organs with a predilection for the leaves and stems. The reduction in production can even reach 70-100%.

Ecological Role –
Tuta absoluta was first found as a tomato parasite in many countries in South America (and Easter Island); it was later found in crops in Europe. However, the EU has not listed it as an inspection or quarantine pest, and this probably contributed to its spread and control difficulty.
In 2006 it was identified in Spain and the following year it was detected in France, Italy, Greece, Malta, Algeria and Libya. In 2008 it was found in Morocco and starting in 2009, seeing the level of danger in Europe, the North American Plant Protection Organization, the United States, California, Florida, Canada and Australia began inspections and preparing for quarantines.
In 2009 it also arrived in Turkey and, subsequently, the spread of T. absoluta continued eastwards to reach Syria, Lebanon, Jordan, Israel, Iraq and Iran. Further southward advances reached Saudi Arabia, Yemen, Oman and the rest of the Persian Gulf states. In Africa, T. absoluta then moved from Egypt to reach Sudan, South Sudan and Ethiopia from the east and to reach Senegal from the west. It was reported in Nigeria and Zambia and South Africa in 2016.
It seems that in 2017 it reached India and the Himalayas, although not confirmed, but perhaps also Pakistan and Tajikistan and other territories with relative damage to crops.
Currently there is a high risk of a further expansion of its range also probably caused by climate change.
As regards the interventions against this moth, it should be remembered that some populations of T. absoluta have developed resistance to phosphorganic pesticides and pyrethroids.
Some more recent compounds such as spinosad, and others, including those based on Bacillus thuringiensis, have shown some effectiveness in controlling the European outbreaks of this moth.
Among other things, with the increase in the cost of insecticides, the control of this insect has become even more problematic and, often, uneconomical.
At the moment, various active principles are being tested but it is believed that the most effective control against this insect is to be found in the application of agro-ecological techniques, with the introduction of more resistant native varieties, decrease in crop specializations, greater use of intercropping and rotations. .
Furthermore, the experiments revealed some promising biological control agents including Nabis pseudoferus, Bacillus thuringiensis and Beauveria bassiana; moreover, the association with Fagopyrum esculentum contributes to increasing the presence of the parasitoid Necremnus tutae population.
Finally, the relatively natural chemical controls include limonene and borax.
Furthermore, the combined use of pheromones and a specific frequency of light have been shown to be effective in suppressing the population of T. absoluta and keeping it within the economic threshold.
Using electric mosquito traps also gives good results.
Among the physical and agronomic means useful for the defense against Tuta absoluta in the greenhouse there are first of all the planting of undamaged material and the protection of the greenhouse with anti-insect nets and double doors, to hinder the re-infestation of adults from the outside. The use of pheromone traps to monitor moth catches and traps for mass trapping of adults are equally important. Finally, it is essential to destroy infested crop residues and allow at least six weeks to pass before the next replanting.
Currently there is no absolute solution for this moth, which is already well adapted and particularly resistant, as mentioned, to common pesticides.