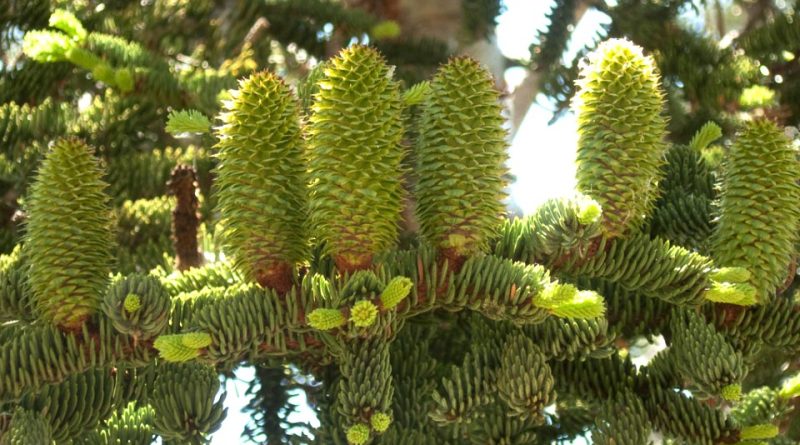 The red fir or silvertip fir (Abies magnifica A. Murray bis) is an arboreal species belonging to the Pinaceae family.

Etymology –
The term Abies comes from Abies which is the classical Latin name (Virgil, Egloghe, from the Sanskrit root abh gush of resin); according to another interpretation it would derive from the Greek word ἄβιος = long-lived.
The specific magnificent epithet refers to the imposing bearing.

Geographic Distribution and Habitat –
The red fir is a conifer endemic to California, Nevada and Oregon where it grows at altitudes between 1,400 and 2,700 m, on granite (Sierra Nevada) or basaltic (Cascade) soils in California, western Nevada and Oregon.
Its habitat is that of areas with a short, hot and dry summer season and with long, cold and very snowy winters, with annual rainfall between 750 and 1,500 mm. It is found both in pure but more frequently mixed forests in association with Abies concolor, Abies procera, Pseudotsuga menziesii, Calocedrus decurrens, Juniperus occidentalis, Abies lasiocarpa, Tsuga mertensiana, Pinus spp., And various shrubs such as Ceanothus cordulatus, Chrysolepis sempervirens and Arctostaphylos nevadensis. 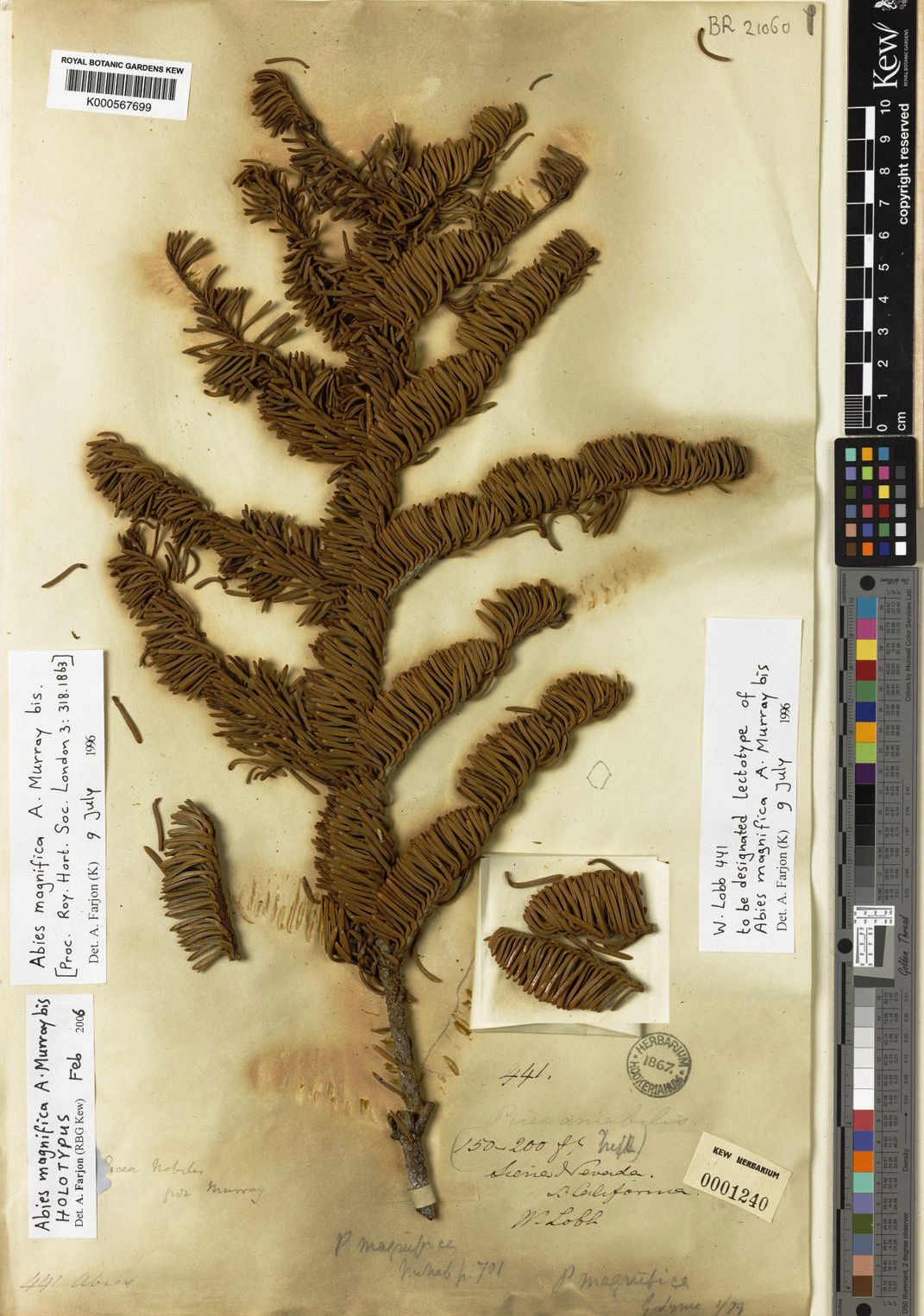 Description –
The red fir is a conifer that in its maximum growth can reach 77 m in height, with a trunk up to almost 3 m in circumference, with a conical habit tending to become cylindrical and irregular with age.
The bark is gray and smooth when young, resinous; over the years it thickens, becoming red-brown and deeply furrowed.
It has secondary branches of light yellow color with reddish pubescences, arranged in an opposite way, verticillated.
The leaves are 0,6-4 cm long, needle-like, with rounded tip, of blue-green or blue-silver color on the upper face, divided by a glaucous band with stomata arranged on about 10 lines; the lower face has two glaucous bands with stomata on 4-5 lines per band. They give off a particular scent similar to that of camphor. The small buds are ovoid, red-brown, with short, broad and hair-covered basal pearls.
Ripening male strobili are purplish or reddish-brown in color.
The cones are oblong-cylindrical, purple tending to brown when ripe, sessile and with a rounded tip, 14-23 cm long and 6-9 cm broad, with pubescent scales 3-4 cm long. The seeds are reddish-brown, 15 mm long; when germinating, they develop 7-8 cotyledons.

Cultivation –
The red fir is an evergreen tree with a long and narrow crown that has a high production of wood per hectare even in unmanaged natural stands. It is therefore increasingly valuable as a timber tree used for general construction and plywood. This species is also popular as a Christmas tree, both grown in natural stands and plantations.
For its cultivation it should be taken into account that it grows naturally in mountain forests on dry slopes and ridges; at altitudes between 1,500 and 2,700 meters where it prefers well-drained gravelly-loamy soils facing north or east with fresh and humid air.
This plant grows in a climate characterized by short, hot and dry summers with long, cold winters with lots of snow. Annual rainfall varies between 750 and 1,500 mm (80% in the form of snow). Dormant trees are very cold hardy, although new shoots are susceptible to late frost.
For cultivation it requires a cool location in good moist but not waterlogged soil but also grows in heavy clay soils. It is a very shade tolerant tree, especially when young, but growth is slower in dense shade.
Instead, it is intolerant to air pollution.
From a pedological point of view, it prefers slightly acidic soil conditions up to a pH of about 5.
It is advisable to plant it with a northern exposure where the plant is more vigorous and long-lived while it can have a short duration in milder climates than its natural habitat.
The magnificent Abies is a very ornamental plant with an often not exceptional growth rate; there is an average increase of 30 cm per year in optimal conditions.
Circumference growth, at least for the first 50 years, is faster.
This species produces large yields of seeds from the age of around 25. Abundant harvests are produced every 2 – 3 years, alternating with years of low seed production.
Propagation is by seed, with sowing in late winter in a greenhouse or outdoors in early spring. Germination is often poor, usually taking about 6 – 8 weeks. Stratification is said to produce more uniform germination, so sowing the seed in unheated seedbed is recommended as soon as it is ripe in the fall.
The seed remains viable for up to 5 years if well preserved.
The young seedlings are then placed in individual pots and transplanted in the open field in late spring or early summer, after the last foreseen frosts.
Alternatively, if you have enough seed, you can sow in a seedbed outdoors.
Trees should be planted in open fields when they are quite small, between 30 and 90 cm in height. Larger trees have difficulty taking root, root poorly and are more subject to wind.

Customs and Traditions –
The red fir was first identified by William Lobb during his 1849–1853 expedition to California, while it had not previously been identified as a separate species by David Douglas.
This conifer is closely related to the Abies procera which replaces it further north in the Cascade range. It also hybridizes with Abies procera, with which it is very similar, so much so that some botanists treat the former as a natural hybrid between the two.
Among the various sui, as well as an ornamental plant, its wood is used which is light, soft, quite resistant, not strong. It is widely used for fuel and occasionally for lumber, crates and pulp.
As an ornamental plant it is used as a fairly popular Christmas tree.
It seems that the Paiute peoples used the foliage of the red fir to treat coughs and colds.
As for the ecological aspects, like many conifers it represents a refuge and food for many species and, given its very vast range and the absence of evidence of decline in its population, it is classified as a species at minimum risk of extinction in the IUCN Red List. (2013).

Preparation Method –
The red fir is a conifer that was perhaps once also used for medicinal purposes. Currently its main use is for its wood, used in different uses and processes and, for cultivated plants, as a Christmas tree.