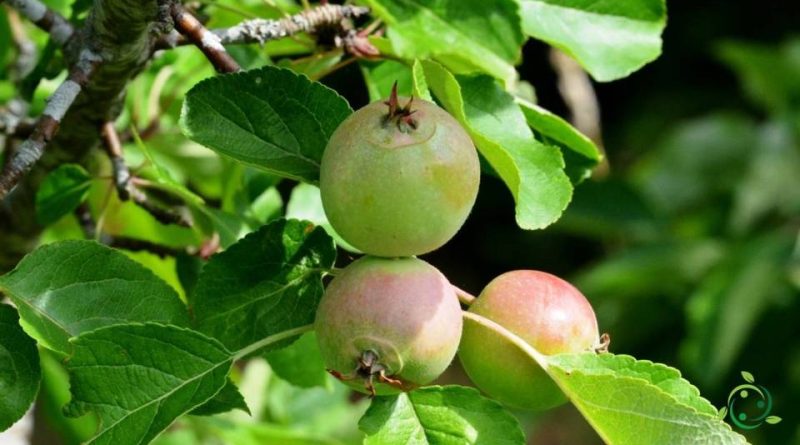 The European crab apple (Malus sylvestris Mill., 1768) is a plant of the Rosaceae family native to an area between Europe and western Asia.

Suitable breeding habitat –
The European crab apple is a tree native to Europe and western Asia by hybridization with other species and in Italy it is cultivated up to the mountain belt.
This species also appears in wild forms that are close to the wild species M. sylvestris which is typically a tree of central-southern Europe present in all regions of Italy except perhaps in the Aosta Valley.
Its habitat is that of woods and shrubs, below the upper mountain belt and above the Mediterranean belt. According to some authors it does not deserve to be distinguished from the cultivated apple tree, of which it represents only a wild form. The apple tree is one of the most cultivated and widespread fruit plants.

Propagation –
Malus sylvestris is an easy-to-grow plant that grows in most fertile soils, including heavy ones, preferring a clayey, well-drained soil that retains moisture.
The plant prefers a sunny position but also grows in partial shade even if it bears less fruit in this condition.
This species is often used as a rootstock.
Cross-compatibility between different Malus species is common. Hybridization can occur naturally in botanical gardens and in nature, or artificially through breeding.
European crab apple reproduction can take place by seed with sowing as soon as it is ripe in autumn in an unheated seedbed.
It usually germinates in late winter. The stored seed requires stratification for 3 months at 1 ° C and should be sown in a cold seedbed as soon as possible.
In some cases, it may take up to 12 months or more to germinate. After germination it is advisable to place the individual plants in single pots and in a medium organic substrate to accelerate growth.
In these conditions they can be planted at the end of the summer with the foresight, however, to protect them from the winter cold, especially in areas further north or greater latitudes.
Otherwise, you can wait for winter and transplant them in the open field the following spring.
Propagation through cuttings obtained from mature wood cuts is also possible; in this case the optimal period is late autumn and the cuttings must be placed in a protected environment to root better.

Ecology –
Malus sylvestris is also known as Malus domestica Borkh., In this case the specific name alludes to its cultivation near houses (the Latin word ‘domus’ means precisely ‘house’).
This plant is native to the European continent and the Caucasus, where it is a component of subtermophilous broadleaf formations (oak, downy oak, English oak, hornbeam, etc.) of the hilly and sub-montane belt.
In the past, M. sylvestris was thought to be the most important ancestor of the cultivated apple tree (M. domestica), which has since been shown to be originally derived from the Central Asian species M. sieversii. However, another recent DNA analysis confirms that M. sylvestris contributed significantly to the genome.
The study found that secondary introgression from other species of the genus Malus significantly shaped the genome of M. domestica, with M. sylvestris being the main secondary contributor. It has also been found that current populations of M. domestica are more closely related to M. sylvestris than to M. sieversii. However, in the purest strains of M. domestica, M. sieversii ancestry still predominates.
The flowers of this plant are hermaphroditic and pollinated by insects and, from an ecological point of view, the fruits are a good source of food for wildlife, especially birds.
The plant also has over 90 associated insect species.