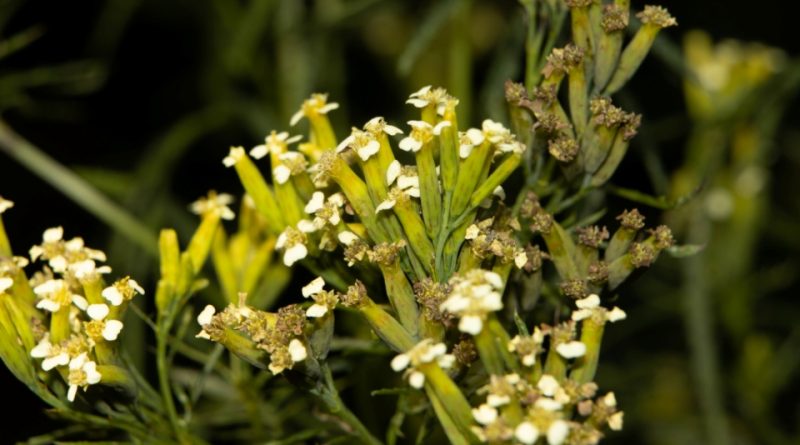 The Huacatay, Wacatay or other names (Tagetes minuta L.) is a herbaceous species belonging to the Asteraceae family.

Etymology –
The term Tagetes according to Coombes, Gledhill, De Theis, Quattrocchi and others, is a genus dedicated by Linnaeus to Tages, a young demigod, grandson of Jupiter, son of Genius and of the Earth, who would have taught haruspicina (divinatory art) to the Etruscans ; according to others it comes from the Greek ταγός tagós duce, commander.
The specific epithet minute refers to minute, very small, very small in size.

Geographic Distribution and Habitat –
Tagetes minuta is a plant native to the coastal, Andean and Amazonian region of Argentina, Chile, Bolivia and Peru, as well as to the Chaco region of Paraguay.
With the Spanish colonization it was introduced all over the world and naturalized in Europe, Asia, Australasia, North America and Africa.
In Italy it is a plant reported only in Friuli Venezia Giulia, Liguria and Tuscany (not found in recent times in Campania).
Its habitat is that of ruderal areas, along roads, in landfills, in construction sites, usually in urban suburbs, on disturbed primitive soils and it grows almost indifferently both dry and wet soils but has a low tolerance to frost and requires large growing seasons. 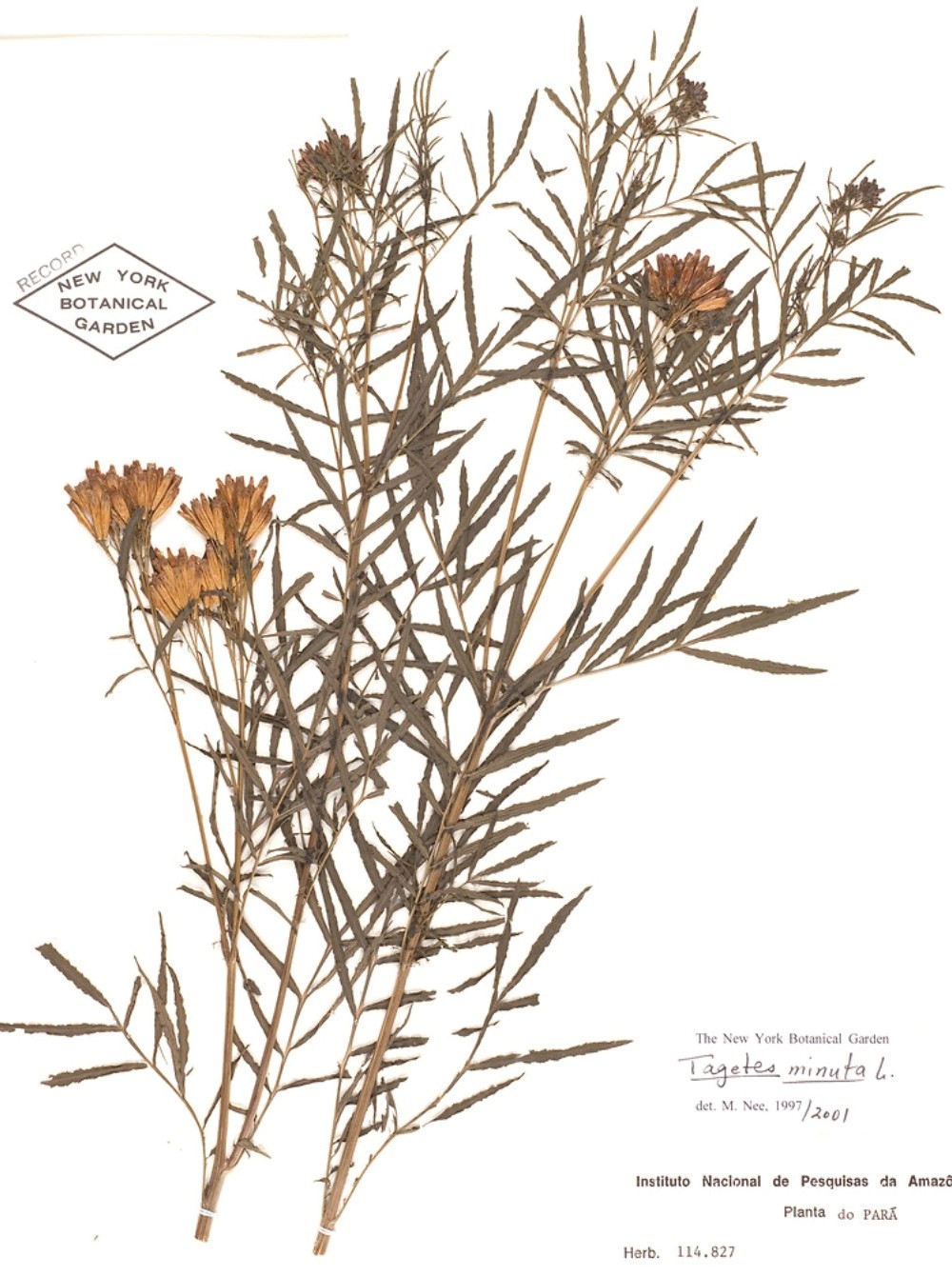 Description –
Tagetes minuta is an annual herbaceous plant but with a woody consistency, which can reach 0.6-1.2 m in height.
The stems are unbranched or repeatedly branched in the upper parts, grooved or ridged, furthermore they are initially green, but after flowering they change to brownish or yellowish.
The leaves are pinnately dissected into 4-6 pairs of fins, lanceolate and toothed, with a strong odor, and small yellow flowers.
It produces clusters of up to 80 cylindrical flower heads in a panicle inflorescence. The heads are 10–15 mm long, enclosed by 4 or 5 fused involucral bracts. Each head generally contains about 3 radius flowers with short, broad, lemon colored leaf and 3 disc flowers.
The flowering period is between September and November.
The fruits are narrow, cylindrical achenes and generally dark brown in color, with pappus and covered with double hairs.

Cultivation –
Tagetes minuta is an annual herb that has a wide range of medicinal uses and is grown in gardens as an insect repellent.
This species has an irritating sap that can cause dermatitis in sensitive people.
As for cultivation, it is a plant that requires well-drained soil of medium fertility in a sunny position.
This plant has escaped cultivation in many areas of the world and has become a pest, such as in Hawaii, Australia and other areas.
To prolong the cultivation and therefore the flowering it is recommended to remove the dried flowers before the seed is formed.
Propagation occurs by seed which must be sown directly in the open field, barely covering it.
To encourage seed germination, the soil temperature should be 18.3 ° C or higher.
It is recommended to plant it in full sun. Sowing should be done in early spring. The seeds should be sown to a depth of about 1 cm and lightly covered with garden soil. They should be watered immediately and regularly during the growing season. Plants will start sprouting within 2 weeks and will reach maturity within 120 days of planting.

Customs and Traditions –
Tagetes minuta is known by different local names which vary according to the region. In the Andes it is known as Huacatay or Wacatay, and in other regions it is common as chinchilla, chiquilla, chilca, zuico, suico or anisillo. Other names include muster John Henry, southern marigold, khakibos, stinking roger, wild marigold, and black mint.
This plant is used as a culinary herb in Peru, Ecuador and parts of Chile and Bolivia. It is called in the Quechua language huacatay in Peru or wakataya in Bolivia.
In Mexico it is considered a flower of the dead during the celebrations of November 1st (Day of the Dead), where it is used to honor the life of family and friends who have died. Its strong smell is believed to attract dead souls to flowers, so burial places are adorned with this plant. It was used by the Aztecs in many religious ceremonies and also as a medicine. In India, it is widely cultivated for making wreaths, for decorative purposes at weddings and parties.
This plant was introduced in various parts of the world immediately after the Spanish conquest of the territories where it grew spontaneously.
Since the time of the Spanish colonization it was introduced in Europe, Asia and Africa. For some time it was used in infusions and as a remedy for colds, respiratory inflammation or stomach problems.
It is commonly sold in Latin grocery stores in a bottled pasta format such as black mint paste.
The plant is aromatic and rich in essential oils which give it its characteristic odor.
The essential oil of Tagetes minuta, used in the perfume industry, includes over 27 components among which the main ones are limonene (13.0%), piperitenone (12.2%), α-terpinolene (11.0%), piperitone (6%), (E) -tagetone (5.7%) and (Z) -ocymenone (5.1%).
The oil has a wild citrus smell and is yellowish to reddish amber in color.
Among its edibles it should be remembered that the dried leaves are used as an aromatic condiment for soups and vegetables, giving a flavor similar to apple.
The essential oil obtained from the distilled plant, collected when it is in bloom, is used as a flavoring in ice cream, baked goods, soft drinks, etc.
In medicinal use, the whole plant is anthelmintic, antispasmodic, aromatic, bitter, carminative, diaphoretic, diuretic, purgative and stomachic.
It is used internally in the treatment of gastritis, indigestion and internal worms.
Instead, it is used externally to treat hemorrhoids and skin infections.
It is effective, especially in the form of extracted essential oil, for killing worms in wounds.
Among other uses, it is widely used in the vegetational recovery programs of some soils.
Root secretions of growing plants have an insecticidal effect on the soil, effective against nematodes and to some extent against snails. These secretions are already produced about 3 – 4 months after sowing.
These root secretions also have a herbicidal effect, inhibiting the growth of some plants growing nearby. It has been proven effectively against perennial weeds such as Ranunculus ficaria, Aegopodium podagraria, Glechoma hederacea, Agropyron repens and Convolvulus arvensis.
From an ecological point of view, as mentioned, it is a pioneer plant and its roots help to stabilize disturbed soils. The flowers are mostly pollinated by insects and bees. The seeds are dispersed through various mechanisms, such as harvesting with crops and fodder, carried away by the wind, carried away by small animals, birds or insects, or swept away by rainwater.

Preparation Method –
Huacatay is a plant that should be harvested when in bloom and dried for later use.
The leaves when dry can be used as a spice to flavor foods or as a spice (as in Peruvian cuisine).
The essential oil distilled from the leaves and flowering stems, collected when the plant is forming seeds, is used as a repellent for insects and is also used in perfumery.
Dried plants can be hung inside as an insect repellent.
Leaves, stems and flowers are harvested when the plants are in seed, mechanically chopped and the oil is then steam distilled. Initially the oil has a wild and unpleasant smell, but after 12 months of maturation it reaches a pleasant sweet-fruity smell (similar to mango) and reaches a stable composition. During maturation, the oil thickens and the color darkens. The aroma of the oil develops further in the following 5 years, after which the quality of the oil deteriorates.
The oil, as mentioned, is used very effectively for wounds and a wide variety of infections.
The boiled leaves of Tagetes minuta are used to treat respiratory tract infections or stomach problems by drinking the boiled mixture. In a 5% dilution, the oil was used to kill worms in open wounds. When used in a cream or lotion, it can have a beneficial effect on fungal and microbial infections and particularly useful in treating weeping wounds or athlete’s foot.
Used in burners, vaporizers or vaporizers, or the steam from the leaves can cure headaches, coughs, bronchitis, chest infections or be an insect repellent for a wide variety of insects. Steam also acts as an antiseptic in a room.
The oil is very powerful and should be used sparingly on the skin (dilution less than 0.5%), not used on sensitive skin and avoided during pregnancy. It is phototoxic and can cause photosensitivity.