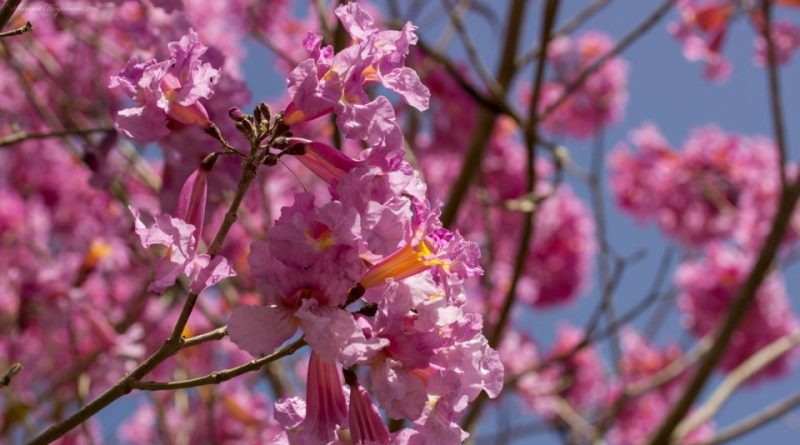 Etymology –
The term Handroanthus is the combination of the name of the Brazilian botanist Oswaldo Handro (1908-1986) and the Greek term “anthos”, flower.
The specific epithet impetiginosus comes from the Latin “impetigo, inis”, impetigo (a skin disease), as it was believed that the plant could cure this disease.

Geographic Distribution and Habitat –
Handroanthus impetiginosus is a plant native to an area that includes north-eastern Argentina, Bolivia, Brazil, Colombia, Costa Rica, El Salvador, French Guiana, Guatemala, Honduras, central and southern Mexico, Nicaragua, Panama, Paraguay, Peru, Suriname and Venezuela.
Its habitat is that of both deciduous and rainforests, where it grows up to about 1400 m of altitude. 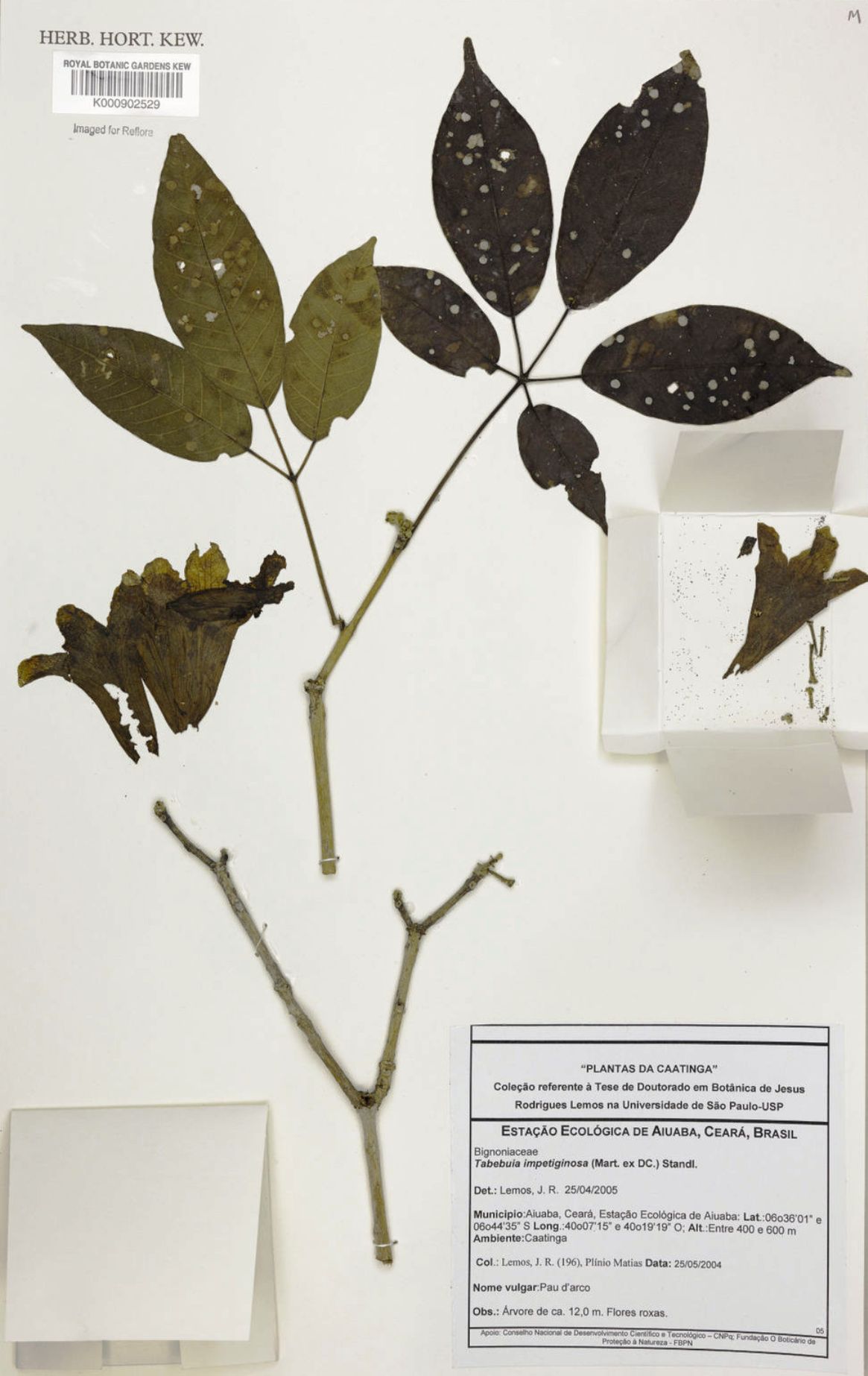 Description –
Handroanthus impetiginosus is a deciduous tree that grows up to 8-12 m, although specimens in nature can reach 30 m.
The trunk has a diameter of up to 80 cm and the crown is semi-globose.
The bark is gray-brown in color, smooth in young plants, then wrinkled and longitudinally cracked over time.
The leaves are grouped at the ends of the branches on a 5-8 cm long petiole; they are opposite, of palmate-compound shape, usually with 5-7 elliptic to obovate leaflets with pointed apex and margin sometimes slightly tightened towards the apex in adult plants, entirely tightened in young ones, 3-15 cm long and 2-9 cm broad, leathery and pubescent, especially below, dark green in color.
The inflorescences are terminal corimbiform panicles, dense, 9-12 cm long, carrying up to 80 flowers with a tomentose bell-shaped calyx, 0.5-0.8 cm long, and funnel-shaped corolla, 4-8 cm long and 3-4 broad cm, five-lobed with wavy edges, of a color from lavender pink to light purple with a yellow throat that turns to dark pink over time, there are rare specimens with white flowers.
In the Southern Hemisphere, it blooms between July and September, before new leaves appear.
The fruit is a leathery, glabrous, dehiscent capsule (which opens spontaneously when ripe), cylindrical, 25-40 cm long and 1.5-2 cm broad, containing numerous flattened winged seeds, 2.5-5 cm long and broad 1-1.5 cm (including wings), which are blown away by the wind.

Cultivation –
Handroanthus impetiginosus is a plant that generally reproduces by seed, which has a germination capability of about three months, in sandy organic soil kept humid at a temperature of 22-24 ° C. The germination times are 2-3 weeks and initial growth is fast, being able to exceed 3 m in two years in the best cultivation conditions, then slow, with the first flowering starting from the third-fifth year of age.
It is a plant of great ornamental value when in bloom, so much so that it is widely used in parks and gardens and in road trees in tropical and subtropical climate zones; its cultivation can be attempted marginally in the warm temperate climate zones, where adult plants can bear temperatures down to about -4 ° C for a short time.
To grow it requires an exposure in full sun and is not particular about the soil provided it is draining; well rooted plants can withstand dry periods, especially at the end of winter, which favor more abundant flowering.

Customs and Traditions –
Handroanthus impetiginosus is a plant, as mentioned, present throughout Central and South America, from northern Mexico to southern northern Argentina. It is the national tree of Paraguay.
The common names of this plant are many depending on the area where it grows, remember: lavander trumpet tree, pink ipê, purple tabebuia, purple-trumpet tree, red lapacho (English); ipê-de-minas, ipê-preto, ipê roxo, ipê-roxo-da-mata, ipê-roxo-de-bola, ipê-roxo-do-grande, pau-cachorro, pau-d’arco-roxo, peúva , peúva-roxa, piuna, piuna-roxa (Portuguese-Brazil); amapa, amapa colorada, amapa morada, lapacho crespo, lapacho negro, lapacho rosado, to’obo (Spanish).
The inner bark of this plant is used in traditional medicine. It is dried, chopped and then boiled, producing a bitter brownish tea known as lapacho or taheebo. The unpleasant taste of the extract subsides when taken in pill or tincture form. Lapacho bark is typically used during the flu and cold season and to relieve coughing in smokers. It is said to work by promoting expectoration of the lungs and releasing deeply ingrained mucus and contaminants during the first three to ten days of treatment.
In ethnomedicine, lapacho plays an important role for several South American indigenous peoples. In recent decades it has been used by herbalists as a general tonic, immunostimulant and adaptogen. It is used in herbal medicine for intestinal candidiasis.
However, the main active compound, lapachol, has since proved toxic enough to kill fetuses in pregnant rats and reduce seminal vesicle weight in male rats at doses of 100 mg / kg body weight.
However, lapachol has strong antibiotic and disinfectant properties and may be more suitable for topical applications. This substance induces genetic damage, in particular clastogenic effects, in rats. Beta-lapacone has a direct cytotoxic effect and loss of telomerase activity in leukemia cells in vitro.
Ethnomedical use of lapacho and other Handroanthus teas is usually short-term, to get rid of acute ailments and not as a general tonic. It performs utility as an antimicrobial expectorant and short-term disinfectant, eg. against PCP in AIDS patients, has yet to be scientifically studied. The inner bark of Handroanthus impetiginosus appears to have anti-Helicobacter pylori activity and has some effects on other human intestinal bacteria.
Among other uses, it should be emphasized that the wood has a pleasant yellowish color, slightly knotty and very tough and heavy (0.935 kg / dm³). It is rich in tannins and therefore very resistant to bad weather and sun. It is not very useful for furniture as it is very difficult to work by hand. It can be found as beams or meet other outdoor structural uses.
It is in fact used in civil and naval constructions, both for internal and external works, being very resistant to atmospheric agents and xylophagous parasites, of valuable furniture and tools.
From an ecological point of view, the flowers are easily accessible to pollinators. Some hummingbirds – eg. the black Jacobin (Florisuga fusca) and the black-throated mango (Anthracothorax nigricollis) – seem to prefer them to the flowers of other Handroanthus species, while for others such as the striped-breasted starthroat (Heliomaster squamosus) they may even be a primary food source.
Unfortunately, harvesting Handroanthus impetiginosus growing in the wild for timber for flooring and terrace production (in which case it is referred to as ipê in much of the timber trade) has become a major cause of deforestation in the Amazon. Since trees do not grow in concentrated stands but are instead found scattered throughout the forest, logging roads need to be built over long distances to locate and harvest trees. In most cases, once these trees have been cut down, the rest of the forest is cleared for agricultural use. Scientific examination of current logging practices, in which 90% of mature trees can be legally harvested, found that the recovery of juvenile populations within 60 years was not likely in any feasible scenario. The parallel is interesting with the overexploitation of Swietenia macrophylla (large-leaved mahogany), a tree that grows with a similar distribution in the same areas as ipê, yet ipê continues to be deforested at prodigious rates without any sign of registration in the Convention on International Trade in Species or other drastic actions likely needed to prevent extinction. Swietenia mahagoni and Swietenia humilis (other species that produce mahogany wood) were so completely depleted that by the early 1900s there were virtually none left to harvest in the wild. Unfortunately, the current scenario is one in which Handroanthus is headed for a similar unsustainable depletion of wild populations.

Preparation Method –
Pink ipê is a plant whose inner bark is used in traditional medicine, after drying, shredded and then boiled, for the production of a bitter brownish tea known as lapacho or taheebo.
Its extracts enter the popular medicine of peoples where this plant grows mainly in the spontaneous state.
Unfortunately, the plant is also used for the use of timber and its use leads to a dangerous and irreversible deforestation of the Amazon forest.