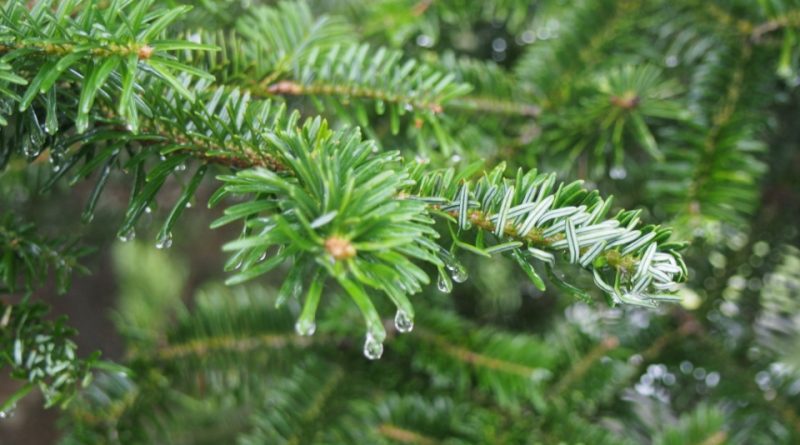 The Nikko Fir (Abies homolepis Siebold & Zucc., 1842) is an arboreal species belonging to the Pinaceae family.

Etymology –
The term Abies comes from Abies which is the classical Latin name (Virgil, Egloghe, from the Sanskrit root abh gush of resin); according to another interpretation it would derive from the Greek word ἄβιος = long-lived.
The specific epithet homolepis derives from the Greek roots ὁμός homós = equal and λεπιϛ lepís = scale, scale referring to scales and bracts of the same length in the cones.

Geographic Distribution and Habitat –
Abies homolepis is a conifer endemic to the mountain areas of Japan and precisely to the Japanese islands of Honshū, Kyūshū and Shikoku and present in an area that includes East Asia and central and southern Japan.
Its natural habitat is that of mountain altitudes between 700 and 2,000 m on soils of volcanic origin, generally well drained. At the highest altitudes it forms pure woods or in association with Abies veitchii and Larix kaempferi, but generally at the most common altitudes it is found in association with Fagus crenata, Quercus crispula, Betula grossa, Tsuga diversifolia, Thuja standishii Pinus densiflora. At even lower odds A. homolepis is replaced by Abies firma. 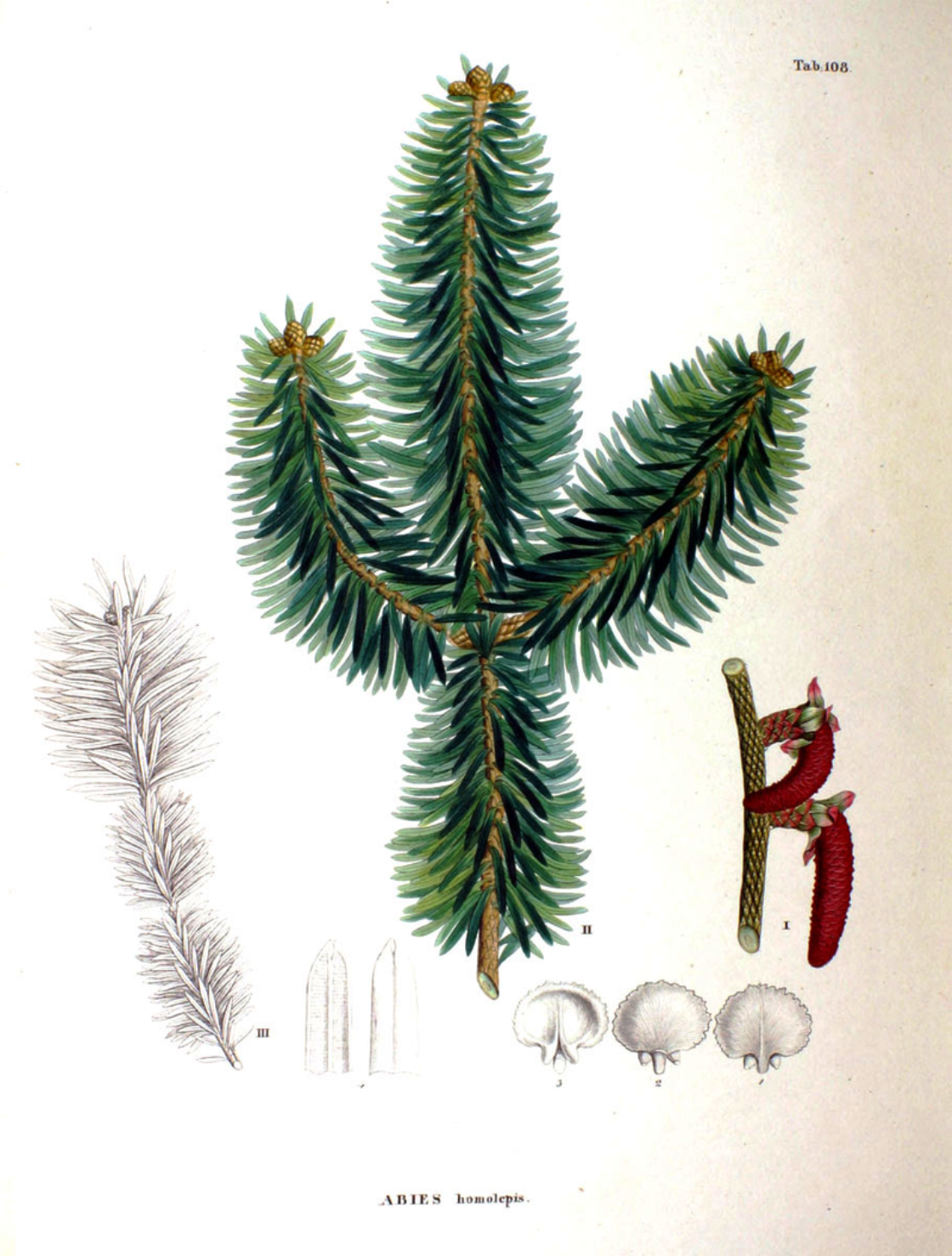 Description –
Abies homolepis is a medium-large conifer that can reach 45 m in height.
The trunk can reach 1-5 m in diameter.
The bark is gray-brown in color which tends to flake off.
The main branches depart from the trunk at right angles, horizontally; secondary twigs are slightly pubescent, gray, brown or yellowish-brown.
The buds are brown with white resin, ovoid-conical in shape, 10-14 mm in diameter.
The leaves are needle-like, bright dark green above, bluish-green below, up to 3 cm long, with obtuse or bifid apex.
Male strobili are ovoid, yellowish-green and 1.4 cm long; the female strobili, resinous, first of a dark purple color and then brown when ripe, are cylindrical, with a rounded tip, up to 10 cm long and up to 4 cm broad; the scales are indented, slightly hairy.
The seeds are greyish in color and 1.8 cm long.

Cultivation –
Abies homolepis is an evergreen conifer with a narrow and conical crown that is harvested in nature for the mainly local use of its wood.
This plant is widely grown as an ornamental in Europe, Asia and North America, where several dwarf forms are available.
For its cultivation it should be taken into account that it is a plant of the cool and humid temperate zone, where it is found at altitudes up to 2,000 meters, and prefers a good moist soil but not impregnated with water. This conifer grows well in heavy clay soils, is very shade tolerant, especially when young, but growth is slower in dense shade.
It is a plant that is more tolerant to air pollution than other species of the genus.
From the pedological point of view it prefers slightly acid soils up to a pH of about 5 and to be planted on north-facing slopes.
The growth rate is quite good, averaging around 30cm per year for at least the first 100 years; the increase in girth is also reasonable, 1.2 meters have been recorded in 36 years.
Propagation occurs by seed and sowing should be done in late winter in a greenhouse or outdoors in early spring.
Germination is often poor, usually taking about 6 – 8 weeks; however stratification should produce more uniform germination, so it is best to sow the seed in an unheated seedbed as soon as it is ripe in the fall.
The seed remains viable for up to 5 years if well preserved.
The young seedlings are then placed in single pots where they will be made to develop at least for their first winter.
The transplant in the open field should be carried out in late spring or early summer, after the last foreseen frosts.
Trees should be planted in open fields when they are quite small, between 30 and 90 cm in height. Larger trees take root badly also due to difficulties in root development and resistance to wind.

Customs and Traditions –
Abies homolepis is a fir native to the central and southern mountains of Honshū and Shikoku, in Japan where it often grows in temperate rainforests with abundant rainfall and cool, humid summers and abundant winter snow.
This plant is mainly used for the use of its wood as well as as an ornamental in Europe, Asia and North America.
Among other uses, it should be noted that an extract of the leaves is used as an ingredient in commercial cosmetic preparations as an astringent and humectant.
As for its wood this is light, soft, coarse-grained. It is used for construction, wood pulp, etc.
As the value of the timber is low, this species has not been used as a timber tree to any significant extent. As a result, there are many relatively large subpopulations left in central Honshu. However, Japanese deer are a serious problem, as they reduce regeneration and sometimes kill larger trees.
The plant is classified as “Near Threatened” on the IUCN Red List of Threatened Species (2013).
It is also a popular forest tree as it is more resistant than other species of the genus to air pollution.

Preparation Method –
Abies homolepis is a conifer that is mainly used for the use of its timber as well as as an ornamental in Europe, Asia and North America.
D this plant also prepares an extract of the leaves which is used as an ingredient in various cosmetic preparations and as an astringent and humectant.