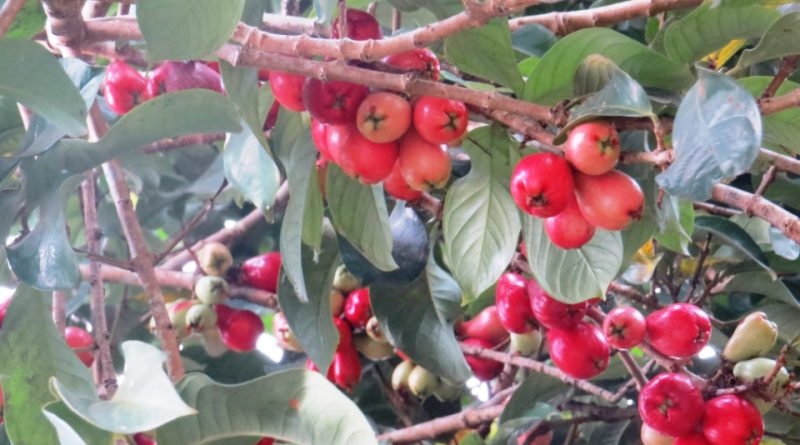 Etymology –
The term Syzygium comes from the Greek σύζῠγος sýzygos paired, united, paired: in reference to paired leaves.
The specific Malaccense epithet derives from Malaysia, the biogeographical region straddling the borders of the Indomalaya and Australasia ecozones.

Geographic Distribution and Habitat –
Syzygium malaccense is a plant native to Malaysia and Australia. It is one of the species cultivated since prehistoric times by the Austronesian peoples. Plants were deliberately transported and introduced in ancient times to Oceania, while in modern times they have been introduced throughout the tropics, including many Caribbean countries and territories.
Its natural distribution is that of Southeast Asia: Myanmar, Thailand, Malaysia, New Guinea, the Bismark Islands and northern Australia.
Its habitat is that of rainforests in the lower mountain region, coastal wetlands and is common in villages, lowland secondary forests and cultivated valleys from sea level up to 1,000 – 1,200 meters. 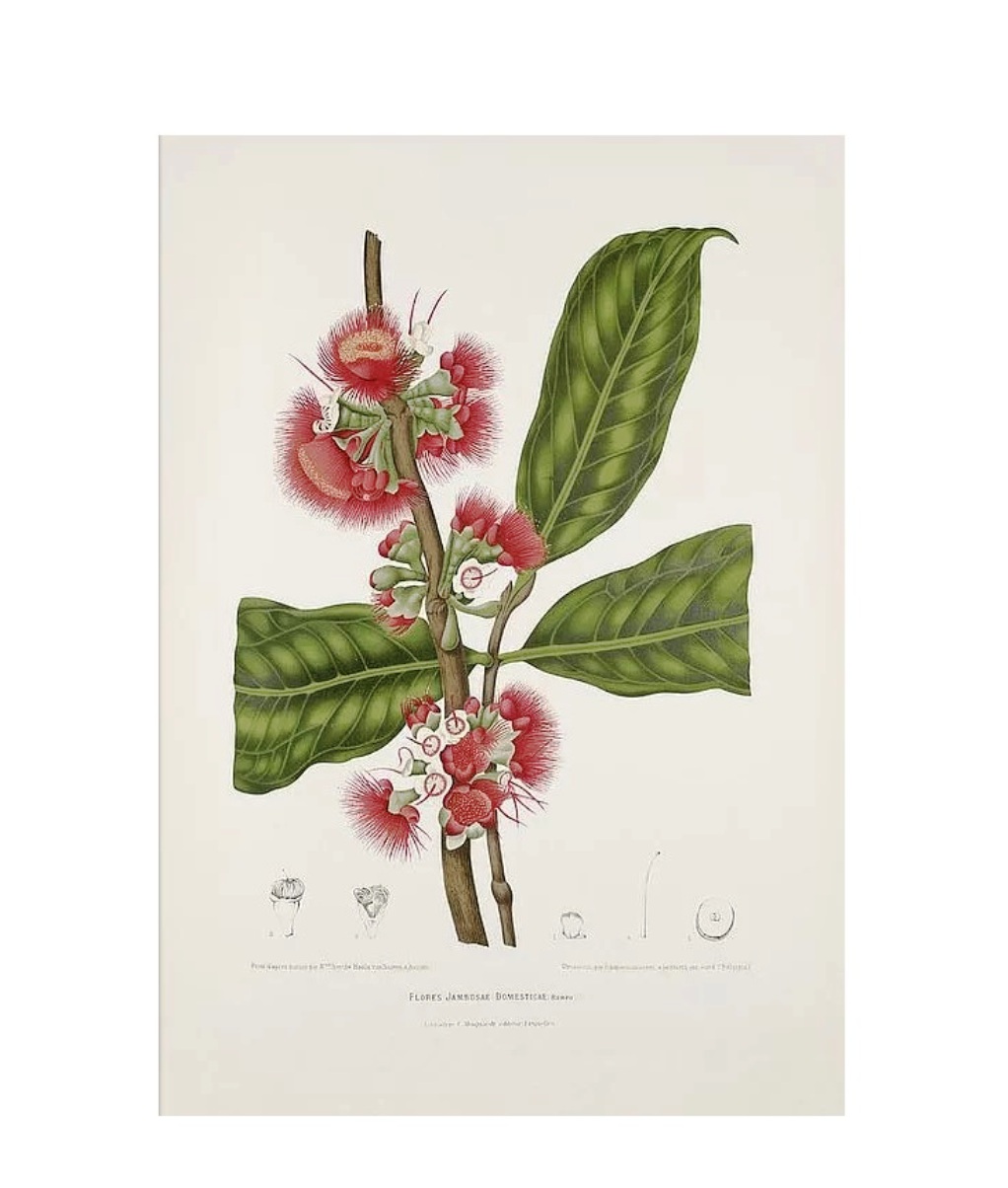 Description –
Syzygium malaccense is an evergreen tree with an enlarged but cone-shaped canopy that usually grows to 5 – 20 meters in height, although specimens of up to 30 meters have been recorded in New Guinea.
The straight cylindrical trunk can have a diameter of 20 – 45 cm (but up to 130 cm in New Guinea), often branched near the ground even if at times without branches for 10 – 15 meters, with buttresses at the base.
The inflorescences grow directly on the trunk or on the old branches without leaves, with an abundant flowering of a very showy red-pink color.
It blooms in early summer, bearing fruit three months later.
The fruit is oblong in shape and dark red, although some varieties have a white or pink skin; measuring up to 20 mm x 26 mm and 5 – 8 cm in diameter, containing a single large seed.
The pulp is white and surrounds a large seed. Its flavor is bland but refreshing.

Cultivation –
Syzygium malaccense is a plant of the fairly humid lowland tropics, where it is also found at altitudes up to 1,200 meters.
This plant grows best in areas where annual daytime temperatures are between 22 and 28 ° C, but can tolerate between 16 and 33 ° C.
The plant is frost intolerant and prefers an average annual rainfall in the range of 1,200 – 1,600 mm, but tolerates 1,000 – 2,200 mm.
Plants can tolerate a dry season, but grow best in areas with year-round rainfall.
From the pedoclimatic point of view they prefer a rich and well-drained soil and a position in full sun, so much so that we find them in the poor and coral soils of the low islands, they do not like very acid soils and prefer a pH between 5.5 and 6. 5, tolerating between 5 and 8.
Plants take 4 to 5 years to flower from seed, with the maximum yield being reached after about 10 years.
Furthermore, the plants can bear fruit up to three times a year; flowering seems to be facilitated by a period of rain following a period of drought.
In some years, fruiting can occur almost continuously and yields of 60 – 80 kilos per plant have been recorded.
Young trees transplant very easily.
Propagation occurs both by seed, with sowing that must be carried out when the seed is still fresh, removed from the fruit, as it has a limited vitality.
Air layering is the most common vegetative reproduction method.
It can also be propagated by cuttings, both directly and by grafting.

Customs and Traditions –
Syzygium malaccense is a plant known with many common names depending on the area where it grows or is cultivated.
It is known as Malay rose apple, or simply Malay apple, mountain apple, rose apple, Otaheite apple, satin rose ash, plum and pommerac (derived from pomme Malac, which means “Malay apple” in French).
Despite the fact that it is sometimes called cashew otaheite, it is not related to cashew.
In Costa Rica it is known as Manzana de Agua. It is found mainly in the rainy areas of the country’s Atlantic coast. In Colombia, Puerto Rico and other Latin American countries it is present and is known as Poma Rosa. In Papua New Guinea, it is known as laulau.
In 1793, Captain William Bligh was commissioned to procure edible fruit from the Pacific islands for Jamaica, including this species.
This plant is used for food but also for medicinal purposes.
The fruits are edible; they are eaten both raw and stewed with cloves or combined with other fruit in pies, pastry creams, etc.
Ripe fruit is crunchy and very juicy, with a thin skin and a mild, refreshing, sub-acid flavor.
They are deliciously refreshing on a hot day, packed with vitamins.
Flowers are also consumed, preserved in syrup or eaten in salads. In addition, slightly acidic stamens are added to salads.
Young leaves and shoots, although still red, are eaten raw with rice.
For medicinal use different parts of the tree are used in traditional medicine; the leaves and the bark have in fact shown to have antibiotic activity, the bark is astringent, while the plant is also slightly hypoglycemic.
The plant contains tannins and is astringent. In particular, the bark, leaves and roots of the Malaysian apple are used against various ailments.
An infusion of the bark is used to treat tuberculosis, mouth infections, stomach pain and abdominal ailments.
The bark is used to treat mouth ulcers in children. It is also used as a purgative and to treat venereal diseases.
The leaves are used to treat red eyes.
A decoction of the leaves is used as a cleanser for skin infections.
Among the other indications of this plant in the medicinal field, it should be remembered that it is used for coughs; diuresis and bad appetite; as a remedy for deep bone pain, diabetes, gonorrhea, swollen stomach after childbirth, sore throat, thrush, bronchitis and to relieve constipation.
Among other uses, a reddish-brown dye is obtained to make motifs on tapa bark canvas; this can be obtained from the bark and the root.
The reddish to light brown wood is hard, tough, very heavy, but tends to warp and difficult to work with. It is used locally for construction.
Wood is traditionally used in Hawaii to build beams for their hale, house, and to model bowls and then-board.

Preparation Method –
Syzygium malaccense is a very widespread plant both spontaneously and cultivated.
As mentioned, it is used both for food and edible purposes but also for other uses.
There are also various typical uses in food use.
In Puerto Rico, the Malaysian apple is used to make wines.
In Hawaii, the fruit is eaten in the same way as an apple from the Pacific Northwest.
Indonesians consume the blossoms of the tree in salads, and in Guyana the peel of the fruit is cooked to make a syrup.
A jam is also obtained which is prepared by stewing the pulp with brown sugar and ginger.