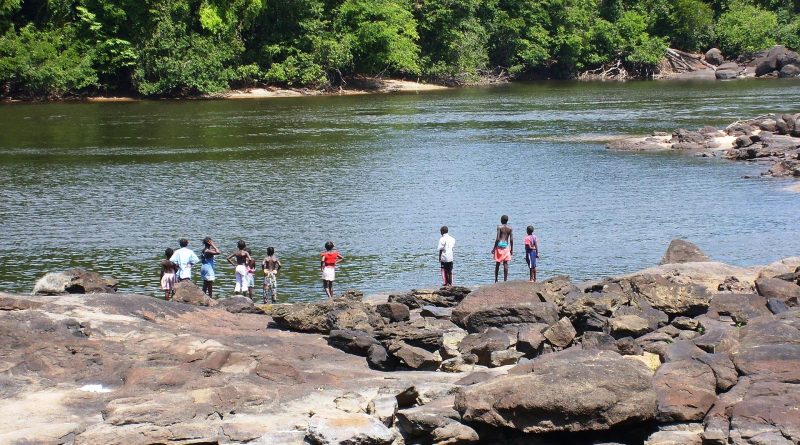 Suriname is a republic of South America with an area of ​​163,270 km². This country has a population of 543,925 and its capital is Paramaribo, which has a population of 240 924 as of 2012.
Suriname is the smallest state in South America in terms of territorial extension, excluding French Guiana, the overseas department of France.
The official language is Dutch, which is also the lingua franca of the country along with Sranan Tongo. The other most widely used languages ​​are Hindi, Javanese and Saramaccan.

Geography –
Suriname borders the Atlantic Ocean to the north, French Guiana to the east, Brazil to the south and Guyana to the west.
The territory of Suriname is mainly hilly, given that the flat and marshy coastal strip is not very wide, in the center-south of the country there are some reliefs that are part of the Guayana Massif, which here is just over a thousand meters high. and which has its highest peak in Juliana Top (1,230 m.).
The coastal development on the Atlantic Ocean is 386 kilometers, there are no islands in the stretch of sea belonging to Suriname, but only some river and lake islets.
The hydrographic network is quite dense and given the arrangement of the reliefs, the major rivers flow from south to north and flow into the Atlantic, Courantyne (725 km in total, including a stretch in Guyana), which marks a large part of the border with the Guyana, Maroni (725 Km), also almost entirely coinciding with the border with French Guiana and Suriname (480 Km) the three major rivers.
In addition to coastal lagoons and seasonal water basins fed by major rivers in particularly humid periods, in Suriname there is a large artificial lake that is very important in terms of energy, the Brokopondo Lake (1,560 km² on average).

Climate –
The climate of Suriname is typically tropical, hot and humid, the average temperatures are constant at 26-27 ° throughout the year and the abundant rainfall, only between September and November, decreases in intensity.
Suriname is characterized almost everywhere by an equatorial climate, hot and humid all year round, so much so that it is covered with rainforests and mangroves.
However, in much of the country there is a rainy season from December to mid-August, which experiences a relative decrease in February and March and a maximum in May and June, and a relatively dry season from late August to mid-November.
The wettest regions are the eastern one, along the Maroni river on the border with French Guiana, where it reaches 2,500 mm per year, and the central-southern ones, close to the Wilhelmina mountains, which culminate with the Julianatop, 1,280 meters high, where it reaches 3,000 millimeters per year.
In the far south, in the Sipaliwini Savanna Nature Reserve, the dry season is longer, the climate therefore becomes tropical, and the territory is covered by savannah, as the name of the park implies. Here, less than 100 mm per month fall from September to December, and just over 100 mm in August, January and February.
In the capital, Paramaribo, located on the coast, an average of 2,200 mm of rain fall in a year; the wettest months are May and June, when up to 300 fall in a month, and it rains almost every day.
In Suriname, it is hot all year round. In Paramaribo, the average temperature ranges from 26.5 ° C in the cooler months (January and February) to 28.5 ° C in the hottest months (September and October).
The Surinamese sea is also warm all year round, and has a temperature similar to the daily average air temperature along the coast, also oscillating between 26 and 28 degrees.
The amount of sunshine in Suriname is only fair in the period from December to June, when, however, the sun does not fail for a few hours a day, while it is good in the driest period, from the end of August to mid-November.
Finally, it is emphasized how Suriname is outside the trajectory of the hurricanes, which pass further north, on the Caribbean. 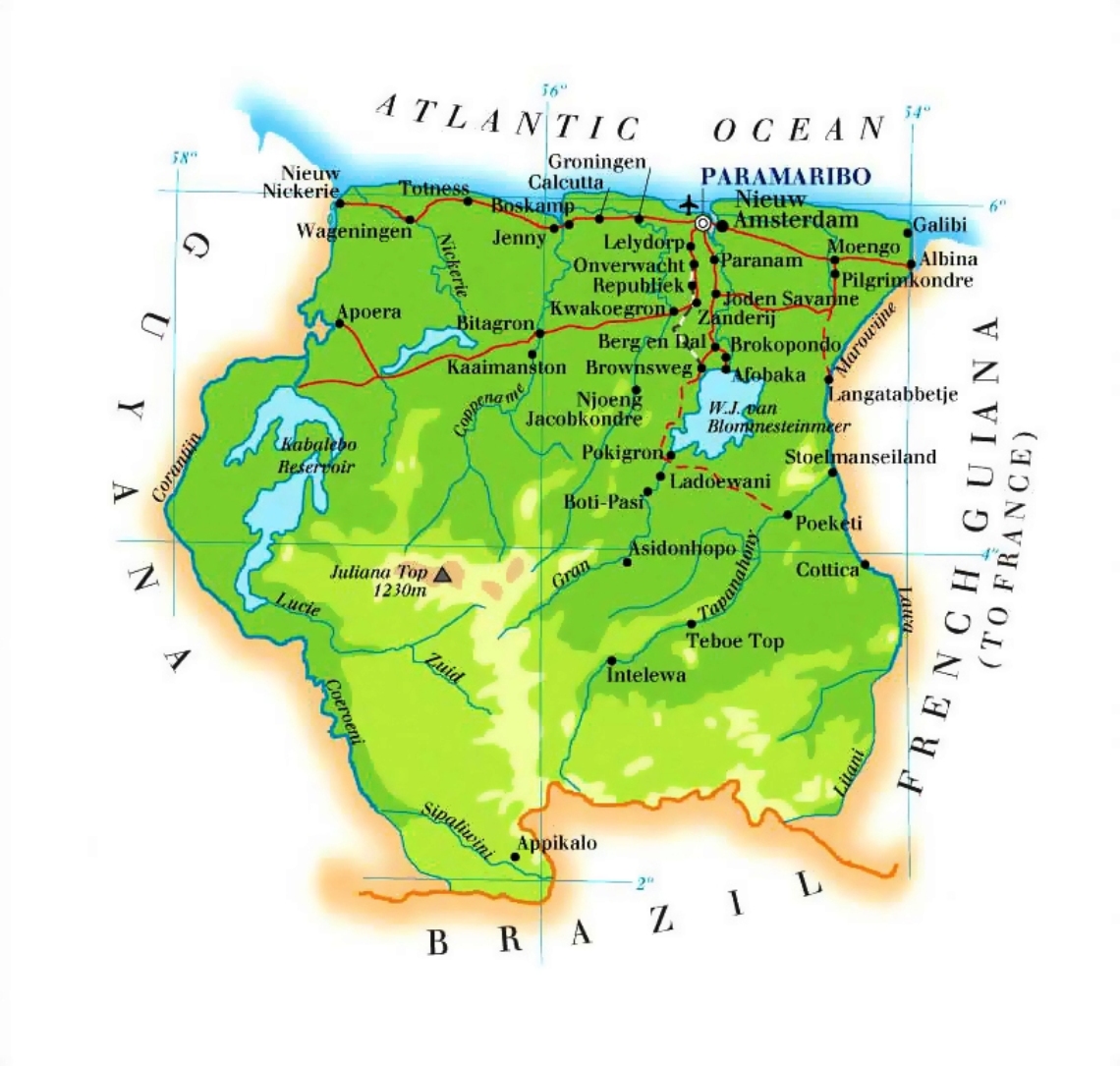 Flora –
The Nature Protection Act 1954 and the Game Act 1954 are important for the protection of nature in Suriname. The Nature Protection Act of 1954 regulates the establishment and management of nature reserves and other protected areas. The Game Act 1954 stipulates which species of wildlife can be hunted and during what period. There are four categories of wild animals, namely protected animals, game species, caged species and predominantly harmful species. The giant anteater, red-faced spider monkey, ocelot, jaguar, wild dog and Guyana dolphin are some of the mammals that are under full protection in Suriname.
Suriname has 11 Nature Reserves, 1 Natural Park and 4 Multi-Purpose Management Areas (MUMA “S). A protected area is an area intended for the conservation and protection of natural and cultural elements of great importance, for the regulation of the activity scientific, educational and recreational use. On March 5, 2015, leaders of Indigenous Peoples of Suriname presented a declaration to members of parliament for the protection of a reserve of 7.2 million people. Conservation International – Suriname and World Wide Fund for Nature worked to support the Trio and Wayana communities’ vision of mapping the reserve and defining strategies to fund and ensure the success of the initiative. The plan includes providing jobs for tribe members such as rangers and guards. Indigenous leaders. they also intend to establish value by keeping rivers pristine.
Suriname is also a signatory of numerous international conventions aimed at the protection and conservation of biodiversity. The most important are the Convention on Biological Diversity, the Convention on International Trade in Endangered Species of Wild Fauna and Flora and the Ramsar Convention on Wetlands. In 2007 the Ministry of the Environment presented the National Strategy for Biodiversity and in 2013 the National Action Plan for Biodiversity.
The vegetation of Suriname is characterized by equatorial forest, with the presence of precious essences such as Lacuma mammosa, Copaifera bracteata, Bombax ceiba and others.
Biodiversity in Suriname is high, mainly due to the variety of habitats and temperature. The average annual temperature in the coastal area is between 26 ° and 28 ° Celsius. Suriname can be divided into four major ecological zones, namely from north to south:
– The young coastal plain;
– The old coastal plain;
– The Savannah or Zanderij belt;
– The internal residual plateaus.
The Suriname coast is wild and is made up of mud banks, sandy beaches, mangrove forests and lagoons. The Guyana Current flows along the Suriname coast. The North Brazilian Current, an ocean current of warm water, has been renamed the Guyana Current. The confusion surrounding its name is due in part to the seasonal change in the flow of nearby currents. Mangrove forests have a single storey with a height of 20–25 meters. They are almost completely homogeneous and dominated by black mangroves (Avicenna germinans).
Inland from the mangroves are salt water and brackish lagoons, surrounded by vegetation of grass and ferns with a low diversity of plant species. Further inland, freshwater swamps and species-rich shrubs can be found. On the coastal level, parallel to the shoreline, there are old ridges of sand and shells. The savannah belt, a mosaic of different landscapes and ecosystems, is located south of the coastal plain.
Various plants and animals, such as the love vine (lenkiwisi) (Cassytha filiformis, sundew (Drosera sp.), Sabana-fungu (Licaniai acana).
Suriname is rich in freshwater resources. Suriname has 228.00 cubic meters per capita of renewable freshwater resources each year. However, these resources are seriously threatened by human activities, such as gold mining.
In the highlands, mountains, such as Bakhuys Mountains, Van Asch Van Wijck Mountains, Julianatop, are part of the Guiana Shield. The Guiana Shield is one of the most biodiverse regions in the world and is home to many endemic species.
The rest of Suriname is covered in forest. Most of the forests are undisturbed due to the low human population density of 2.7 people / km. There are still new species discovered in Suriname. In 2012, Conservation International Suriname (CIS) announced the discovery of 60 new species in Grensgebergte and Kasikasima.

Fauna –
In Suriname, mangrove forests are important as resting and wintering areas for birds, such as the scarlet ibis (Eudocimus ruber). However, poaching is a major problem in the coastal area. According to Ottema, a 2006 study reveals that tens of thousands of protected shorebirds and waders are poached each year. The Nature Conservation Division of the Ministry of Forestry attempts to prevent poaching by employing more forest rangers and through environmental education. Additionally, Ottema felt that the big-billed seed finch or Twatwa is nearly eradicated.
A typical species of Suriname is the Peruvian Rupicola, a bird with a characteristic appearance and bright orange plumage (the male, the female is gray) that nests near the granite masses emerging from the Amazon rainforest of the country.
In addition, the orange-winged Amazon (parrot) makes its nest in the lagoons.
Turtles (Chelonodis sp.), Snakes, iguanas, deer and the long-snouted or bare-tailed armadillo (Dasypus sp.) Grow and live in the Savannah belt of Suriname.
Four species of sea turtles nest on the beaches. These sea turtles are:
– Aitkanti or leatherback turtle (Dermochelys corriacea);
– Krape or green turtle (Chelonia mydas);
– Warana or Olive Ridley turtle (Lepidochelys olivacea);
– Karet or hawksbill sea turtle (Eretmochelys imbricata).
Furthermore, the white-faced saki can be said to be endemic to Guianas. The Guiana piculet (Picumnus minutissimis) is probably endemic to Suriname. It has not been confirmed for neighboring countries.
Among the recently discovered species were, among other things: the chocolate-colored “cocoa” frog and the young planthopper.
Finally, as far as fish fauna is concerned, Suriname has approximately 61 endemic freshwater fish. According to Mol, the Atlantic goliath grouper (Epinephelus itajara) is an endangered species.