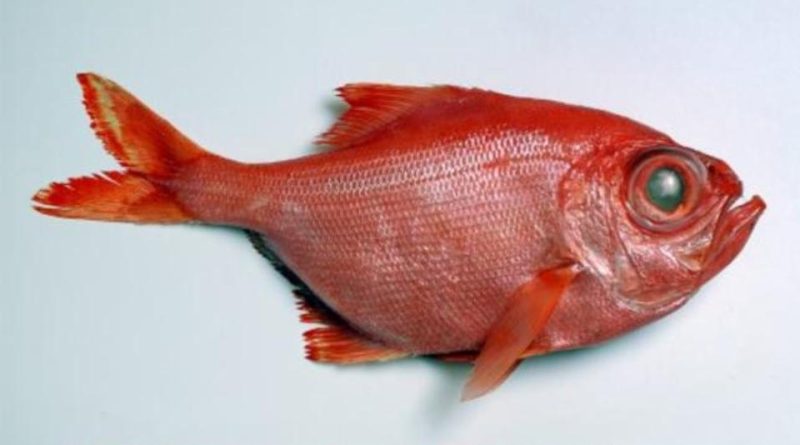 Geographic Distribution and Habitat –
Beryx decadactylus is a fish with a cosmopolitan distribution, in subtropical and temperate waters, with a latitudinal band ranging from 70 ° N to 48 ° S. It is found from the far north of Greenland and Iceland south of Brazil in the western Atlantic and South Africa in the eastern Atlantic. It is found from the Indian Pacific and East South Africa to Japan, Australia and New Zealand. It has also been reported off the coasts of Argentina and Hawaii. It is likely more common in the western Pacific than records indicate due to the lack of fishing in this range.
It is also present in the Mediterranean Sea but very rare and reported in the Italian seas but with few catches.
Its habitat is quite varied, with a depth of 110-1,000 m below the surface; it is found in localized aggregations on deep-water coral habitats on the continental shelf and on the continental slope. During the day it stays in deeper waters and at night it migrates vertically to shallower waters. It is most commonly found at depths of 200–400m in waters of approximately 24 ° C however the depth range varies by region. In the eastern Atlantic the marine depth range is 350-600 m, while in the western Atlantic it is between 100 and 972 m; however the most common depth where it lives is 400–600 m. Depth variation is greatest in the Indian Pacific where it is found up to 1,000 m in waters off Australia, New Zealand, New Caledonia, La Reunion Island, Mauritius, Madagascar, Comoros, Seychelles, Korea, Japan, New Guinea, Ryukyu and Hawaii Islands. 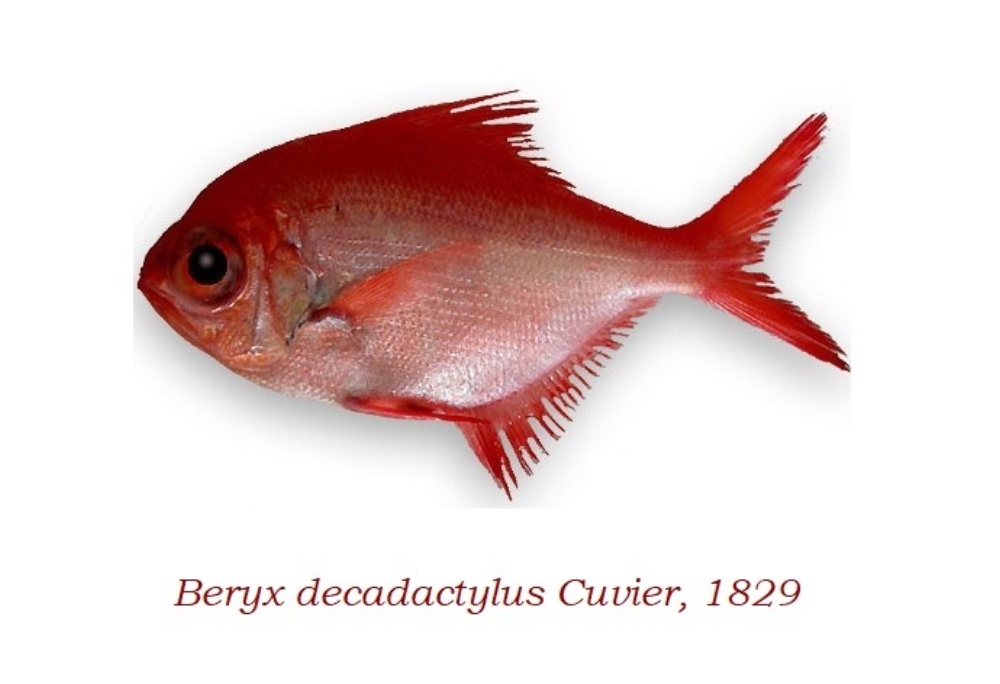 Description –
The Beryx decadactylus Cuvier is a fish with a roughly rhombic shape, high in the center and compressed laterally, with a color that varies between scarlet red and bright orange, with purple reflections on the ventral region. Dorsal and caudal scarlet. Iris stained red.
which can reach 60 cm in length.
It is covered with imbricated ctenoid scales, with a small pad, similar to a fleshy disc, usually in the free part. The scales cover the cheeks and extend over the bases of the dorsal and anal fins.
The head has a short muzzle and a slightly concave profile. The eyes are very large and in the upper margins, in special infraorbital cavities, there is a white, transparent and slimy liquid.
The nasal openings are very visible (one anterior near the tip of the muzzle and one posterior). Present a spine before the suborbital bone.
The mouth, cut obliquely, has a prominent jaw. The posterior end of the maxilla is wide and reaches the vertical which passes through the posterior margin of the pupil.
The villiform teeth are present in both jaws, on the vomer and on the palatine. Finely serrated lower margin caps, thornless pre-operculum.
The dorsal fin is of medium length and is higher in the front, while the anal fin is similar but longer. These two fins have some faint spiny rays. The caudal fin is biloba and broad. The mouth is quite large and protractile.

Biology –
The alfonsino is a fish that up to about 25 cm in length has a pelagic life at shallow depths, with increasing size it goes deeper and deeper.
The spawning takes place in the summer months, in the period between June and September, even if the males can reproduce all year round.
These fish release eggs multiple times during an extended breeding season over a rather short period.
The eggs and larvae are epipelagic and remain close to the surface of the ocean.
The eggs hatch after about 27 hours and the larvae are initially 1.5-3.0 mm in size, identifiable by the pigment near the brain.
Maturation takes place around 3.7-6.0 mm and the rays and scales of the fin are completely formed from 15 mm onwards. They are distinguished by their elongated pelvic rays and anterior spines as well as by the pigment near the gas bladder, although they are very similar to the larvae of Beryx splendens.
The juveniles live deeper, but are still pelagic for a few months, and then move to their demersal habitat where they will live as adults.
This species reaches sexual maturity after 4 years and at that point will be about 30 cm in size, with females on average slightly larger than males.
Individuals grow slowly, as is common among Berycidae members.
Although their maximum age is unknown, the individuals were caught at 69. Their actual maximum age is unknown, however, with estimates ranging up to 85.

Ecological Role –
The Beryx decadactylus, as mentioned, has a mesopelagic life at relevant depths, at least up to 1000 meters. The adults meet closer to the bottom than the juveniles, to the point of being almost demersal.
These fish tend to congregate in colonies in deep water, typically close to corals. At night they migrate vertically into shallower water.
Their main food sources are crustaceans, cephalopods and small fish, with the latter being the most abundant prey in its diet. In this it is quite unlike Beryx splendens, which appears to have slower digestion and a wider dietary breadth.
Beryx decadactylus is a fish that plays an important economic role in commercial fishing, including trawling and longline fishing to catch them, as it has excellent meat. It is important for fishing in Spain and Mauritania in the eastern Atlantic, in the southeastern United States in the western Atlantic and in Japan, on the island of La Reunion and in the Canary Islands in the Indian Pacific.
It is also caught as a by-catch of the targeted fishery for Beryx splendens, although catch data probably does not distinguish between the two.
Of all Beryx species, Beryx splendens is the most commonly caught, but B. decadactylus makes up 95% of all Beryx catches off the southeastern United States.
However, Beryx decadactylus is a rare fish in many areas, possibly due to exploitation by commercial fisheries and exhaustion from by-catches.
This fish is listed as Least Concern by the International Union for Conservation of Nature (IUCN) because its wide distribution protects it from extinction and in some parts of its range it is not a target species. However, it could also be threatened by habitat loss from deep-sea trawling which causes damage to deep-sea corals.
Latimeria chalumnae is among the predators of this fish.