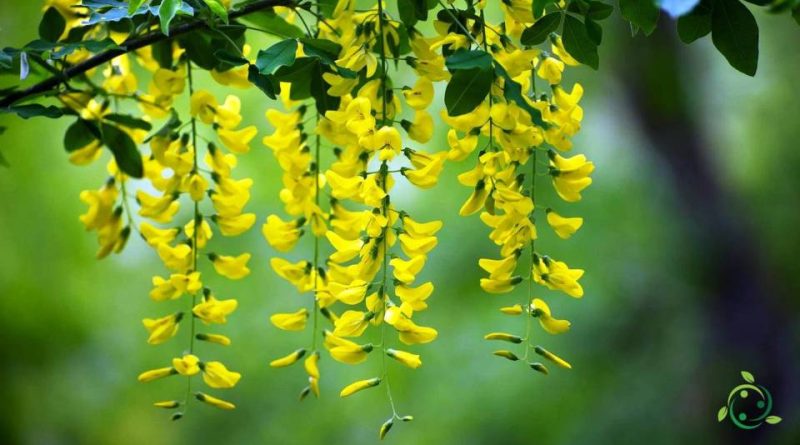 The common laburnum (Laburnum anagyroides Medik., 1787) is a small deciduous tree of the Fabaceae family, native to southern Europe, from southwestern France to the Balkans.

Suitable breeding habitat –
Laburnum anagyroides is a plant native to an area centered on south-eastern France up to the Alps, the Apennines and the Balkan Peninsula, up to 1,800 m. s.l.m ..
It is also present in Italy, in all continental regions, except perhaps in Val d’Aosta and in the islands.
Its habitat is that of temperate and moderately humid environments, especially in calcareous soils, often associated with black hornbeam woods (Ostrya carpinifolia).
It grows in groves near the inhabited areas on humiferous and base-rich clayey soils, below the mountain belt, with optimum in the sub-Mediterranean belt, replaced higher up by L. alpinum.

Propagation –
The common laburnum is a very cold hardy plant, able to tolerate temperatures down to around -25 ° C when fully dormant.
It is a very tolerant and easy to grow plant that grows in virtually any soil, as long as it is not waterlogged.
It grows well in heavy clay soils and is tolerant to atmospheric pollution.
It is a tree often grown for ornamental purposes and the flowers are delicately scented and of a beautiful yellow color.
This species has a symbiotic relationship with some soil bacteria, these bacteria form nodules on the roots and fix atmospheric nitrogen. Some of this nitrogen is used by the growing plant, but some can also be used by other plants growing nearby.
Propagation can happen by sema. Sowing should be done as soon as the seed is ripe and germination is generally very fast and good.
After the emergency, the young seedlings are placed in individual pots and then transplanted in the summer.
To facilitate germination, the stored seed can be pre-soaked. The procedure involves keeping the seed for 12 hours in warm water after which it is sown even in early spring.
Another propagation system is the agamic one by cuttings.
In this case, mature wood cuttings are taken at the end of winter and planted in the ground in a shady area.

Ecology –
Laburnum anagyroides is a deciduous tree that usually grows from 6 to 9 meters in height and is occasionally also used in nature for its wood and probably also for medicinal use.
The plant, in nature, grows in the woods and Mediterranean scrub on limestone; at altitudes up to 1,800 meters.
The plant is used as a rootstock for ornamental plants with very close genetic characteristics and is often cultivated as an ornamental, especially appreciated for its flowering in spring.
However, remember that all parts of the plant contain the toxic alkaloid: cytisine. Its molecular structure bears some resemblance to that of nicotine and has similar pharmacological effects. It is sometimes used as a smoking cessation aid and is also sometimes used for recreational purposes, where it can induce nicotine-like intoxication. Negative side effects can include nausea, vomiting, seizures, heart pain, headaches and, in higher doses, even death from respiratory failure.