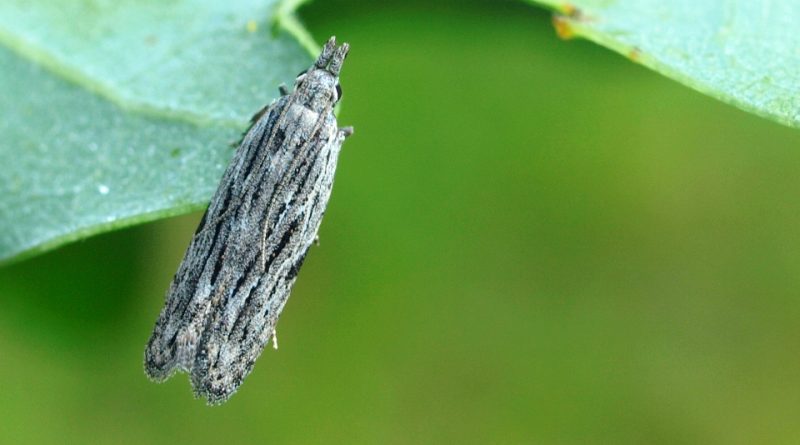 The peach twig borer (Anarsia lineatella Zeller, 1839) is an insect belonging to the Gelechiidae family.

Geographic Distribution and Habitat –
The peach twig borer is a moth native to the Palearctic region, it is widespread in Europe (in particular in the Mediterranean area), North Africa, Middle East, North America, Australia and Japan but also present in Oceania and also introduced in California in 1880.
It is present in Italy where it carries out its cycle mainly in the foothills and near the sea, characterized by a mild climate. In these areas it is a parasite of peach trees and other Drupaceae (plum, apricot, almond tree) and with its trophic activity it damages the buds, shoots and fruits of the host plants. Furthermore, in peach cultivation, its presence is almost always associated with the oriental peach moth (Cydia molesta (Busck, 1916)); both pests cause the same damage to the host plant, so it is difficult to distinguish them.

Morphology –
Anarsia lineatella is a moth that in the adult stage has the appearance of a butterfly with a wingspan between 12 and 16 millimeters; the front wings have a gray color with brown streaks, while the rear ones are light in color; the posterior ones have fringes on the margins.
It has a small head which is equipped with two large compound eyes and two ocelli; moreover there are multi-articulated antennas, with which it feels the smells.
The mouthparts are equipped with large labial palps and a spirotrumpet; the latter is usually kept rolled up under the head, to be unrolled when the moth uses it to suck nutrients.
It has slender legs that are used to grasp the substrate on which the insect acts.
The abdomen is the distinctive character between males and females: it is tapered in males while it is stocky in females; presents, in its terminal portion, the genital organs.
The egg has an oval shape with, at the beginning, a white color; as they approach maturity, they take on a yellow-orange hue and are 0.3-0.5 millimeters in size. In addition to observation with a scanning electron microscope, the chorion (external surface of the egg) has cavities and ridges, as well as aeropili, protrusions that allow the exchange of oxygen and carbon dioxide with the external environment; in its anterior portion, the chorion presents the micropyle, through which the sperm enters the egg during fertilization; the micropile looks like a flower-shaped opening.
The larva has a brown color; the lighter-colored intersegmental spaces are clearly seen, particularly when the larva moves. The head, the thoracic plate, the anal shield and the legs have a darker, brownish color. The caudal end features a supraanal comb and four spinous processes.
At maturity the larva reaches a length of 12 – 15 millimeters.
The chrysalis, on the other hand, has a length ranging from 4 to 6 millimeters; it is brown in color tending to red; it also has a cremaster with large hooked bristles, which are wrapped in a white cocoon.

Attitude and Life Cycle –
Anarsia lineatella is an insect that overwinters in the young larva stage, in characteristic niches built at the level of the underbelly of the twigs, in the cortical area. These shelters are connected to the outside with a very small funnel, formed by excrement and rosure held together by secretions and silky formations.
Once the period of the end of winter has arrived, the larvae can already leave these shelters to start their activity; they enter the flower buds and subsequently continue the attack on the shoots and leaf groups. In this phase the damage is particularly serious for the plants in breeding and for those just grafted, due to the loss of the “grafting sprout”. The adults flicker in May-June (1st flight) and lay eggs either on the leaves or on the attached young fruits. The larvae of this 1st generation damage mainly the shoots and to a lesser extent the small fruits. The adults (2nd flight) flicker in July-August and originate a second larval generation which mainly affects the fruits. The adults of the 3rd flight generally appear in September, giving rise to the third generation larvae which are destined to overwinter. This moth therefore completes three generations a year.
Ultimately the damage is determined by the larval stage which attacks the flowers, buds and fruit.
The damage to the flowers that occurs in early spring is caused by the larvae that enter the buds and destroy them.
The damage on the shoots is generally quite serious for the plants in breeding; in fact the larvae penetrate inside them and dig tunnels, central and longitudinal, in the area of ​​the medulla. The shoots wither suddenly and in a characteristic way; subsequently there is necrosis and loss of the cimal; often the larvae also undermine the base of the leaf groups, gathered in a rosette, causing the same damage seen on the shoot.
The damage on the fruit is similar to that produced by Cydia molesta. The larvae dig tunnels in the pulp at first superficial, then deeper and deeper; often there are lumps of rubber that come out in the attached points. The fruits fall and / or rot due to the action of secondary pathogens.

Ecological Role –
Anarsia lineatella larvae feed on Prunus species, including Prunus avium, Prunus spinosa, Prunus domestica, and Prunus insititia.
This moth does not have many natural antagonists except for the hymenoptera Paralitomastix variicornis, which carries out a parasitoid action against it, managing in part to reduce its population.
Up to now, the fight against Lineatella Anarsia has followed the principles of guided and integrated struggle.
The interventions are carried out after monitoring the population with sex traps and with sampling on the shoots and on the apical shoots, in order to establish the population density and the% of the infestation, therefore the most appropriate time for the intervention. The two techniques, which complement each other, cover different moments in the phytophagous cycle.
As regards the sampling technique, the apical shoots are checked by establishing the percentage of shoots infested with larvae and intervening only when the infested shoots represent 10% of the controlled organs. This control is important for wintering and first generation larvae. In this case, the treatments are carried out when the threshold is exceeded with the same products indicated below for the monitoring technique.
As regards the monitoring of Anarsia lineatella, sexual traps are used and the technique involves the following phases:
– installation of the traps towards the end of April;
– trap density: 1-2 traps per hectare or per plot;
– intervention threshold: 7-10 adults caught per trap per week (or 10 adults in 2 weeks); it must also be considered that the fight against. Anarsia must relate to the control of harassing Cydia.
In case of need for intervention, proceed as follows:
– after 14-15 days from exceeding the threshold for generation larvae;
– about 4-6 days after the threshold is exceeded.
In addition, some chitin inhibitor development regulators can also be used at the beginning of the flights. Finally, in some operating conditions, Bacillus thuringiensis ssp. Can be used. kurstaki.
Finally, it should be noted that in certain operating conditions it is possible to apply the method of sexual confusion or disorientation of the males combined with the Cydia molesta, by placing the special dispensers in the orchard at the beginning of the flights (or just before) of the two phytophages.
It is also emphasized that agroecological techniques, with the decrease in crop specializations, the inclusion of tree, shrub and herbaceous associations and, in general, the increase in the biodiversity of companies or production districts is a further scenario on which intervene but relying on the advice of specialized technicians in the sector.