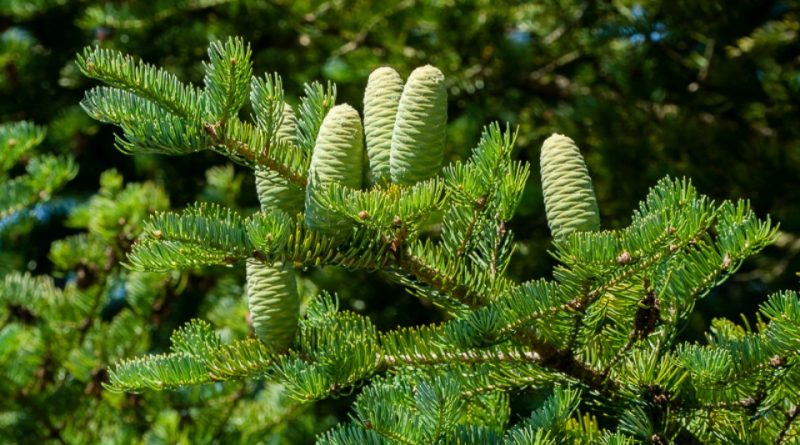 The Manchurian fir (Abies holophylla Maxsim., 1866) is an arboreal species belonging to the Pinaceae family.

Etymology –
The term Abies comes from Abies which is the classical Latin name (Virgil, Egloghe, from the Sanskrit root abh gush of resin); according to another interpretation it would derive from the Greek word ἄβιος = long-lived.
The specific epithet holophylla derives from the Greek roots ὅλος hólos = whole, entirely, and φύλλον phýllon = leaf in reference to the whole and undivided apex of the needle-like leaves.

Geographic Distribution and Habitat –
Abies holophylla is an endemic conifer of Asia where it is found in hilly and mountainous environments of China (Heilongjiang and Jilin), North Korea and Russia (Primorskiy).
Its habitat is that of altitudes between 10 and 1,200 m in the northern part of the range and between 500 and 1,500 m in the southern part, on granite lithosols; the reference climate is cold, with humid summers and dry winters, apart from long snowy periods. Pure woods are present at high altitudes and in the northern part of the range, but the mixed formations with Pinus koraiensis occur more commonly. In the other areas it is found in association with Abies nephrolepis, Larix gmelinii, Quercus mongolica, Fraxinus mandshurica, Betula ermanii and species of the genera Picea, Ulmus and Populus. 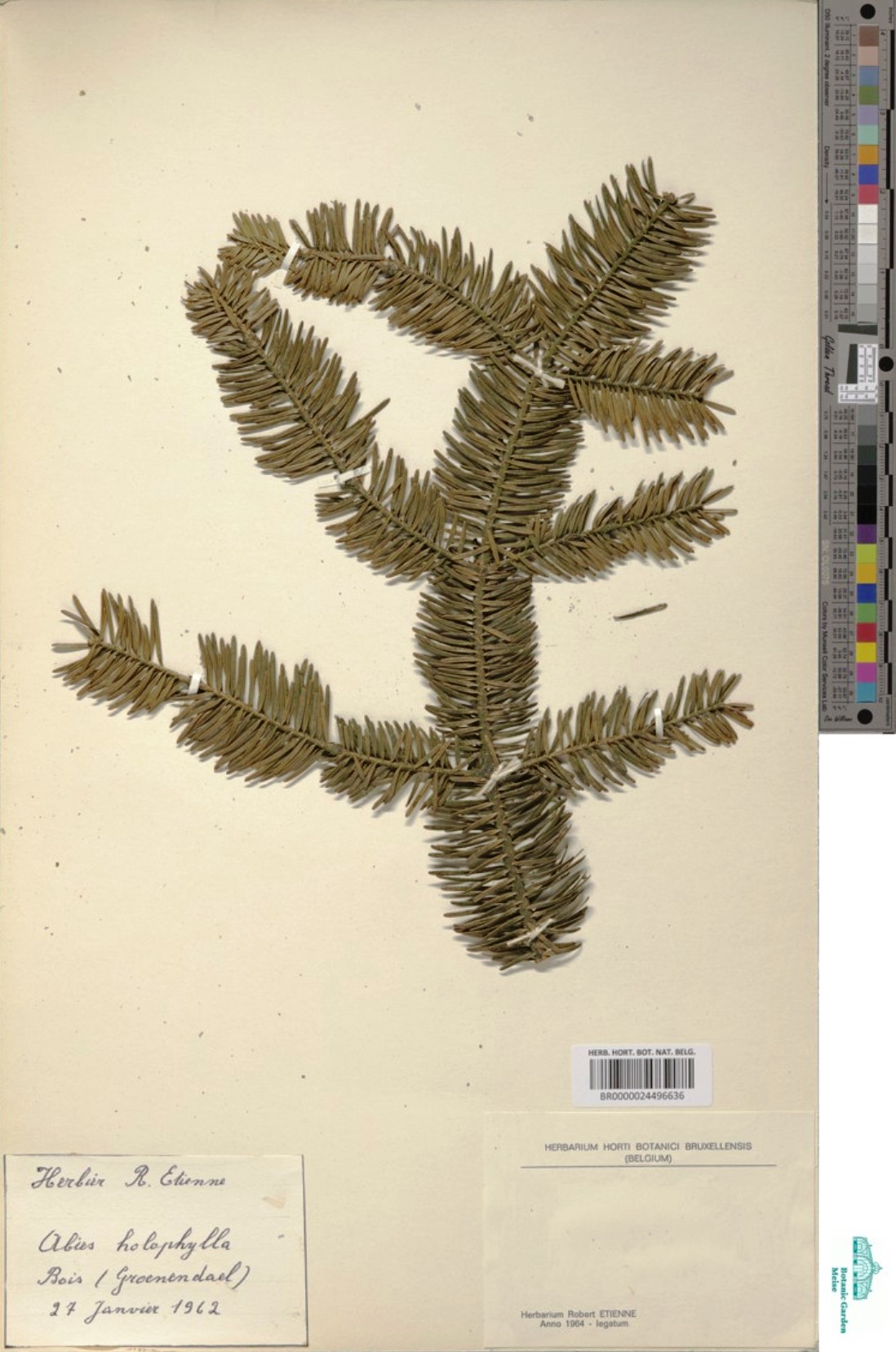 Description –
Abies holophylla is a plant with a conical habit that reaches a height of 25-40 m with a gray or gray-brown, flaky bark, which tends to split with deep cracks as the years progress.
The trunk can reach up to 1.5-5 m in diameter. The secondary branches are gray-brown to yellowish-gray in color, glabrous.
The leaves are 2-4 cm long, needle-like, bright green on the upper side, light green on the lower side; they are arranged like a comb along the lower branches, at right angles along the upper ones.
Male strobili are pale yellow with pinkish reflections.
The female cones are cylindrical, resinous initially green-blue-yellow, then yellow-brown-gray when ripe, 12-14 cm long and 4-5 cm broad, with a rounded and sometimes depressed tip. They have smooth and rounded scales. The seeds are greyish-yellow, cuneiform, with a quadrangular wing.

Cultivation –
The Manchurian fir is an evergreen tree used as a timber tree in its area of ​​origin and mainly exploited in managed forests.
Unlimited logging, especially but not only in the Russian Far East, has however led to a decline of this species over the past three generations, which is often exacerbated when forests are then subjected to repeated fires after logging. However, the magnitude of the decline is estimated to be less than 30%, which does not qualify this species as fully threatened. However, a continued decline could result in a change of category at the next valuation.
Abies olophylla is a cool temperate zone plant where it is found at altitudes of up to 1,500 meters. It grows in areas where the climate is cold, with humid summers and arid winters with long periods of snow. Dormant trees are very cold hardy, but new vegetation is susceptible to frost damage.
It is a plant that prefers good moist but not waterlogged soil and grows well in heavy clay soils. Plants are very shade tolerant, especially when young, but growth is slower in dense shade.
It is a plant that is intolerant to air pollution.
From a pedological point of view, it prefers slightly acidic conditions, up to a pH of about 5 and grows better on north-facing slopes.
Trees should be planted in their permanent positions when they are quite small, between 30 and 90 cm in height, as larger trees develop poorly roots and have less wind resistance.
Propagation is by seed. Sowing should be done in late winter in a greenhouse or outdoors in early spring. Germination is often poor, usually taking about 6 – 8 weeks. Reports report that layering produces more uniform germination, so it would be advisable to sow the seed as soon as it is ripe in the fall.
The seed remains viable for up to 5 years if well preserved.
The young seedlings, as soon as they have reached the size to be handled, should be placed in individual pots where they will spend the first winter.
The transplant in the open field should be carried out in late spring or early summer, after the last foreseen frosts.
Alternatively, if you have enough seed, you can sow in a seedbed outdoors.

Customs and Traditions –
The wood of Abies holophylla is light and easily workable and is widely used in the manufacture of plywood and veneers. It is also used for the manufacture of musical instruments and in general in carpentry. Furthermore, despite its elegant bearing, its use as an ornamental tree is restricted to vegetable gardens and botanical gardens.
Among other uses, it should be noted that an extract from the leaves, stems and wood is used as an ingredient in commercial cosmetic preparations as a skin conditioner.
From an ecological point of view, despite the vast area (estimated occupation area of ​​50,000 km²), the unregulated cutting has caused a decline of 30% of the population over three generations. It is therefore classified, in the future, as subject to future classification as an endangered species in the IUCN Red List.

Preparation Method –
Abies holophylla is a conifer used extensively for its timber.
Other uses include the preparation of an extract of the leaves, stems and wood for commercial cosmetic preparations.
On the other hand, no food uses are reported.