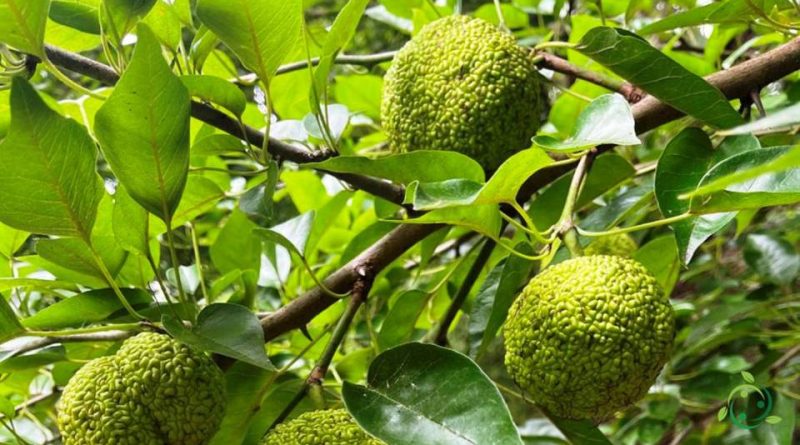 The Osage Orange (Maclura pomifera (Raf.) C.K. Schneid.) Is an arboreal plant of the Moraceae family widespread in the United States of America.

Suitable breeding habitat –
Maclura pomifera is a plant native to North America and introduced in Europe in 1818 and in Italy in 1827 where it had a certain diffusion especially in Tuscany and Lazio.
The pre-Columbian area of ​​this plant was largely confined to one zone in what is now the United States, namely the Red River Delta of Oklahoma, Texas and Arkansas, as well as Blackland grasslands and oak savannas. .
A disjoint population also occurs in the Chisos Mountains of Texas.
The plant has since become widely naturalized in the United States and Ontario, Canada. The tree has been planted in all 48 states of the United States and in southeastern Canada.

Propagation –
The Osage Orange is a plant that prefers deep, fertile soil, but is hardy in most of the contiguous United States, where it is used as a hedge. It needs to be pruned regularly to keep it within limits and one-year-old shoots will grow one to two meters, making it suitable for coppice.
It is a plant remarkably free from insect predators and fungal diseases. There is also a thornless male cultivar of the species which is reproduced vegetatively for ornamental use.
M. pomifera, in Europe, is cultivated in Italy, in the former Yugoslavia, in Romania, in the former USSR and in India.
Propagation occurs by seed. Sowing should be done as soon as the seed is ripe in a pot in an unheated seedbed. It is advisable to immerse the seed stored for 48 hours in warm water and stratify for 2 months at 4 ° C, then sow in an unheated seedbed.
Germination is usually good. When the seedlings are large enough to handle, they should be placed in individual pots and grown in a greenhouse for their first winter.
The transplant in the open field should be done in spring or early summer, in any case after the last foreseen frosts. Propagation can also take place by cuttings obtained from semi-mature wood in mid-summer, or from mature wood cuttings, in the period from late autumn to January in seedbeds.
You can also prepare 4 cm long root cuttings in the period of December. These should be planted horizontally in pots in a greenhouse and transplanted as soon as possible.

Ecology –
It is hypothesized that many extinct animals, in the Pleistocene period, fed on Maclura pomifera.
An analysis of phylogeny based on chloroplasts and nuclear genes indicates that a clade containing Maclura pomifera likely diverged from other Maclura clades during the Oligocene, coinciding with the divergence of mammoth / mastodon and sloth, suggesting that these mammals could be seed dispersing states of Maclura pomifera.
An equine species that went extinct around the same time has also been suggested as the plant’s original dispersal agent because modern horses and other animals sometimes eat the fruit. However, a 2015 study indicated that this plant’s seeds are not effectively spread by existing horse or elephant species.
The fruit is not poisonous to humans or livestock, but it is not preferred by these, as it is mostly inedible due to its large size (about the diameter of a softball) and hard, dry texture. The edible seeds of the fruit are used by squirrels as food. Large animals such as livestock, which typically consume fruit and disperse seeds, mostly ignore the fruit.
The fruit is instead eaten by black-tailed deer in Texas and fox squirrels in the Midwest, who drop them to open them. Cruisers are said to peck the seeds.