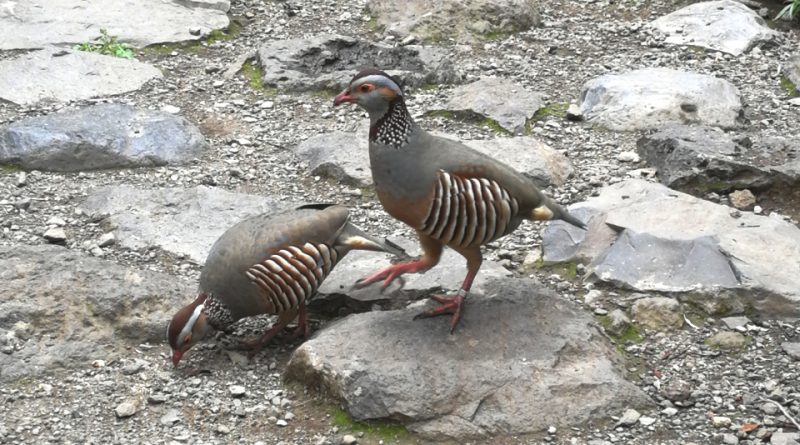 The Barbary partridge (Alectoris barbara Bonnaterre, 1792) is a bird belonging to the Phasianidae family.

Geographic Distribution and Habitat –
Alectoris barbara is a widespread sedentary bird with four subspecies in North Africa and southern Europe, where it was successfully introduced in Gibraltar, as well as in the Canary Islands (Subsp. Alectoris barbara koenigi).
In Italy it is present only in Sardinia where it nests both on the island and in the satellite islands with a population of 3000-10,000 pairs where some authors believe that the species colonized the island in the late Miocene while, according to others, it was introduced from man at the time of the Romans.
Its habitat is that of areas characterized by sparse woods alternating with cultivated areas, Mediterranean scrub, semi-arid territories. 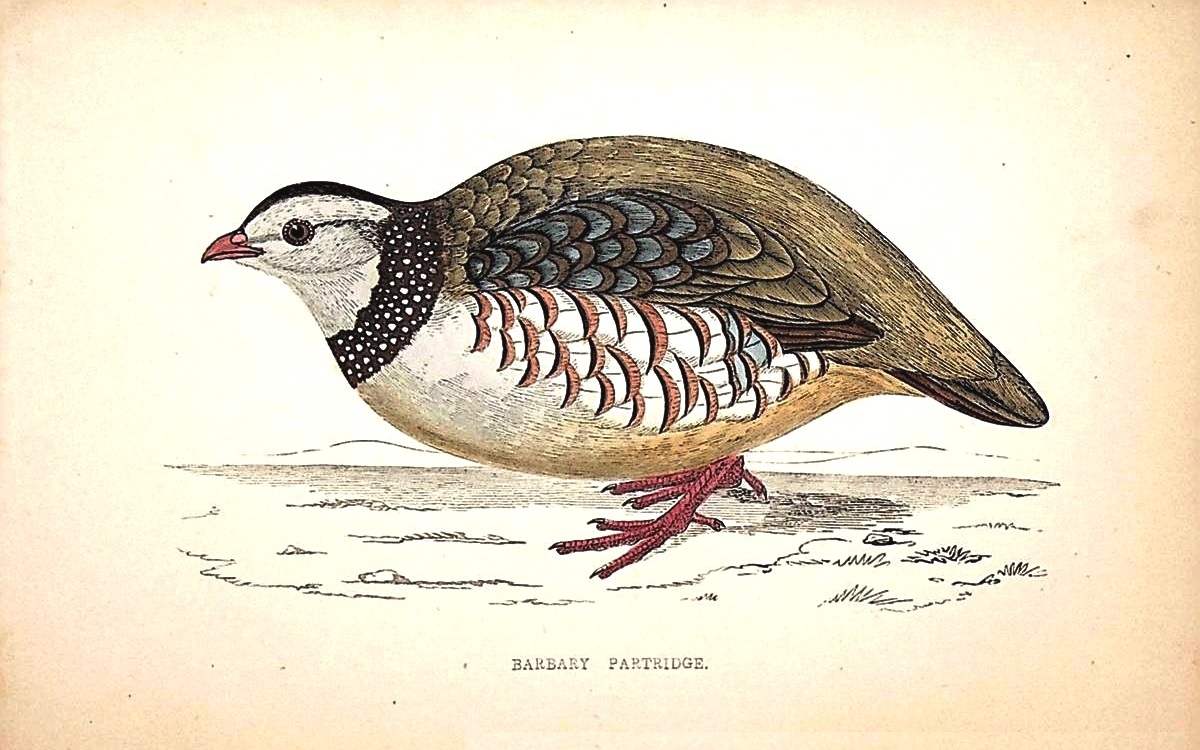 Description –
The Barbary partridge is a bird with a total length of 32-33 cm, with a wingspan of 45-50 cm, for a weight ranging between 450 and 500 grams, without sexual dimorphism, except for the male which is provided of a spur in the tarsi which is often found, in sketchy form, also in females.
It has a slightly downward curved beak that is red or reddish-orange in color.
The legs are red and have long and dark nails and in the males one or two spurs.
The back is gray-brown, earthy color; the brown or reddish brown collar is very characteristic. The underside is gray in the chest and beige in the belly. It differs from the Red Partridge for its smaller size and the characteristic brown collar sprinkled with white specks. The nostrils are uncovered. Short rounded tail and wings.
The young have a livery similar to that of the adults but with a less marked colouration especially as regards the collar which is practically absent.
The eggs are cream colored finely speckled with reddish brown.
The verse is characteristic, metallic; does not like flying and moves on the ground with great speed.

Biology –
Alectoris barbara is a species that reaches sexual maturity from the first year of age and reproduces as early as the spring following its birth.
It is a monogamous species, with the couple already forming at the end of December and, between March and May, usually lays from ten to fourteen eggs.
The eggs are not laid in a real nest, but in depressions in the ground lined with dry leaves, grasses and very little down, which the female provides for about twenty-five days to incubate.
The nesting takes place in dry open environments with scattered bushes and trees, preferring those with low and discontinuous Mediterranean scrub on rugged stony slopes; locally in bushy steppes, pastures, arable land and woody crops, from sea level up to about 1800 meters above sea level.
Usually an annual brood is laid; sometimes, due to the rainy season (spring storms) or predation (foxes and wild boars), the brood is repeated around June. In fact, it is not uncommon to find some sprints with the summer brood consisting of three or four chicks.
The chicks are born after 23-24 days of hatching and make the first flights between seven and ten days of life.
The family group remains united forming a scarcely territorial brigade. More brigades can be merged giving rise to large groups.

Ecological Role –
The Alectoris barbara is a bird with gregarious habits in autumn-winter, it emits distinctive calls, some of which resemble those of a domestic rooster.
This species generally moves by stalking on the ground and only if forced does it take off its characteristic flight. Suspicious, if in danger she runs and quickly goes for cover. In recent years we have seen the presence of sprints in the outskirts of inhabited centers, due to the general change of the countryside that with the abandonment of man has become covered with grassy bushes and Mediterranean scrub.
As for food, it feeds mainly on grain kernels, as well as on vegetable substances (grains and various seeds) in spring – summer, mastic seeds and berries in winter, integrating everything with insects, larvae and snails that it searches for on the ground. .
This species, in the early stages of life, has a carnivorous diet consisting essentially of small invertebrates (worms, snails and insects). Particularly appetites are Inula viscosa, wild thistles and some small crassulents, rich in water.
This bird is one of the species protected by the Berne Convention (Law 503/1981, Annex III); Dir. CEE 79/409 Annex I.
Unfortunately it is a declining species in recent years due to environmental changes and the use of pesticides. In the last decade it has stabilized, currently it is endangered by the continuous and massive presence of wild boars and foxes that destroy the brood in search of eggs, not least by eating the newly hatched chicks.