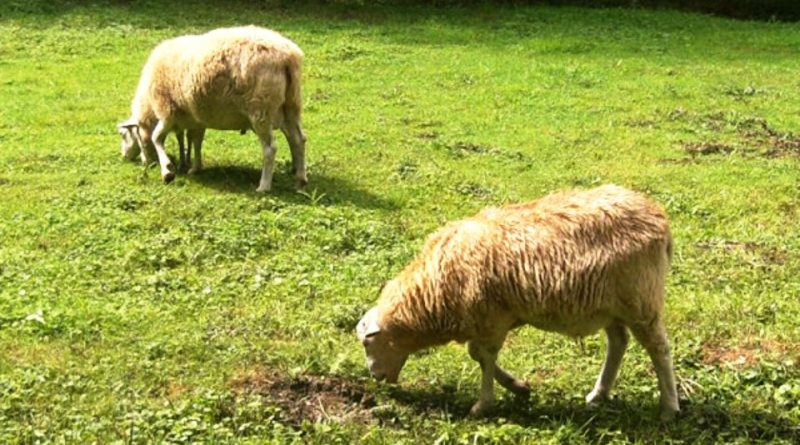 The Diepholzer Moorschnucke sheep breed, or Diepholz peat sheep, is a sheep (Ovis aries Linnaeus, 1758) originally from Northern Germany, with a main aptitude for meat production.

Geographic and Area Distribution –
The Diepholzer Moorschnucke is a sheep breed originating in Northern Germany, in Lower Saxony, in particular in the peat-rich pasture area of ​​the Diepholz region, where it has been bred and kept for centuries.
This breed today is mainly bred in raised bog regions and dry grasslands of northern and central Germany, mainly in the Diepholz bog depression. Its original range was the districts of Diepholz, Nienburg and Rotenburg.

Origins and History –
The Diepholzer Moorschnucke is a small indigenous breed of sheep from Northern Germany that belongs to the Heidschnucke family, part of the Northern European short-tailed sheep group. However, unlike the other types of Heidschnucke, it is entirely white and hornless.
In the last century, the Diepholzer Moorschnucke was generally referred to by the name of Heideschnucke, meaning horned sheep, whether the animal was white or gray, with horns or not. In the Diepholz-Sulingen area, the land on which the sheep grazed was rich in peat, thus, already at the end of the last century, in the region they were known under the name of Moorschnucke, or peat sheep. The name Moorschnucke is mentioned at the beginning of the last century in the Freistatt diaconate, between Sulingen and Diepholz, already attesting to the presence of numerous flocks at the time.
This breed was probably obtained by crossing a hornless native breed of simple wool (schlichtwolligen) with a population of gray and horned Heidschnucke, the German gray of the moor. In 1922 the hornless white Heidschnucke was separated from the horned variety and was later named Moorschnucke or White Polled Heath.
There are only three farms dedicated to the breeding of Diepholzer Moorschnucke PDO, so much so that in 1974 there were only 40 registered animals. For years the animals were kept on farms of various sizes, usually on the moors or on the edge of the moor.
Diepholz Moorschnucke is protected as a regional breed and has been registered in the European Union’s list of Protected Designation of Origin (PDO) products.
This breed is included in the list of domestic breeds in danger of extinction and is a “breed under observation” (BEO) according to the Red List of the Animal Genetic Resource Consultancy (Fachbeirat Tiergenetische Ressourcen); it is also in category III in the red list of the Gesellschaft zur Erhaltung alter und gefährdeter Haustierrassen. The breeding of sheep for meat and the reduced grazing of the moors have contributed to the almost total extinction of the breed.
However, thanks to the joint efforts of conservationists, BUND and breeders, since 1974 the number of Diepholz Moorschnucke sheep has risen to around 5,000 animals.

Morphology –
The Diepholzer Moorschnucke breed is characterized by having both sexes hornless with an elongated head and angled ears. The bone structure is light and delicate, the hooves are clear and very hard. The tail is naturally short.
The color is white with an outer fleece consisting of a rough upper wool and an inner fleece made from a soft and fine underline.
This sheep has a shoulder height of 55-60 centimeters in the ram, and 45-50 centimeters in the sheep.
The weight is 60–70 kilograms for males and 40-50 kilograms for females.

Productive attitude –
Diepholzer Moorschnucke sheep is a breed that feeds on wild plants such as purple swamp grass, sedge, sorrel, mushrooms, mosses, lichens, and herbaceous plants such as common heather, bell heather, cross-leaved heather, black empeter, lingonberry, bilberry marsh, blueberry, pine and birch.
It is a breed suitable for life on the moors and is also able, for example, to get out of swamp holes easily. It is very durable and can even walk through water up to the knee. It is best suited to nature reserves, conservation areas and grazing swamps and wetlands.
Its meat is considered a delicacy, and is leaner and darker than that of other breeds of sheep. Thanks to extensive farming and feeding, the meat retains a spicy and gamey flavor.
The roasted meat of Diepholzer sheep is very tender, with a hint of game. The variety of pasture grasses that the sheep feed on provide them with a good supply of unsaturated fatty acids.
In 1998 the meat of this breed obtained the European recognition of denomination of controlled origin (Diepholzer Moorschnucke PDO).