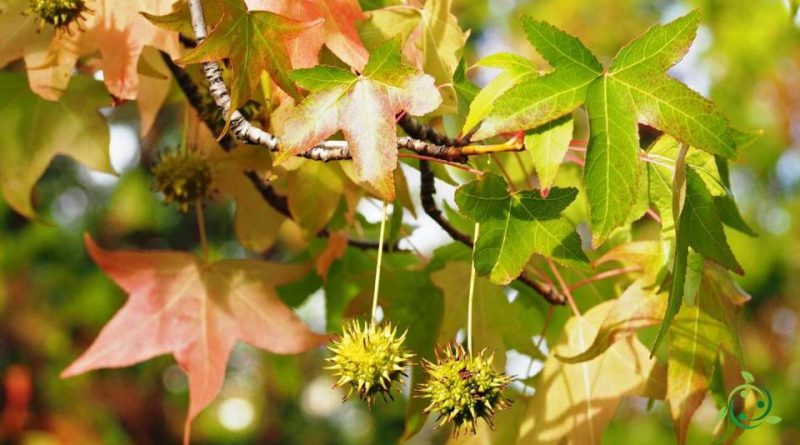 Reproduction of the American sweetgum

The American sweetgum (Liquidambar styraciflua (L., 1753)) is a plant of the Altingiacee family native to eastern North America, from southern Canada to Florida and Mexico.

Suitable breeding habitat –
Liquidambar styraciflua is a tree native to the south-eastern United States with offshoots also in Central America, where it is typical of the cloud forest.
It is found naturally in the plains from southwestern Connecticut to south central Florida, through central Ohio and west to Illinois, southern Missouri, and eastern Texas, but not in the colder areas of the Appalachian highlands or states of the Midwest. The species is also found in Mexico from southern Novo León to southern Chiapas, as well as in Guatemala, El Salvador, Nicaragua, and Honduras. In Mexico and Central America it is a plant characteristic of the rainforests, which grows at medium altitudes in various mountainous areas where the climate is humid and more temperate.
The plant has spread as an ornamental tree in Australia where it has a distribution from southwestern Western Australia, South Australia, New South Wales, Victoria and up to the Atherton Plateau in the far north of Queensland.
It was also imported into various countries such as Europe, as an ornamental plant, around 1680.

Propagation –
The American sweetgum is a plant that prefers areas that grows in its natural habitats in fresh and mixed woods and at altitudes above 1,000 meters in the south of its range, but with some specimens reaching up to 450 meters. It grows best in areas where annual daytime temperatures are between 20 and 34 ° C, but can tolerate between 5 and 38 ° C.
When the plant is dormant it can survive temperatures down to around -11 ° C, but new spring shoots can be severely damaged at -1 ° C.
The plant prefers an average annual rainfall in the range of 1,000 – 1,500 mm, but tolerates 800 – 2,500 mm.
From a pedological point of view, it prefers a neutral to acid soil, with a pH between 5 and 7, tolerating 4.5 – 8.5.
Plants grow poorly in shallow soils on chalky formations.
Remember that trees start flowering around 20-25 years old.
The multiplication of this tree generally occurs by seed or by cutting; the cuttings are taken in spring or early autumn, and rooted in a mixture of peat and sand in equal parts; the seeds are taken in autumn and stored for a few weeks in a humid and cool place, for example in the refrigerator in a plastic bag, before placing them on the ground, in a container.

Ecology –
Liquidambar styraciflua, in its native habitat, is a common tree with a disjoint distribution between the deciduous forests of the southeastern United States and the Mesoamerican rainforests. The relationship between the Liquidambar populations of the United States and Mexico is currently under discussion, thanks to the study of the DNA sequences of different populations.
A paleodistribution model would indicate that both US and Mesoamerican populations persisted disjoint in their current territories during the late Pleistocene rather than the theory of a southern expansion model.
This plant is quite long-lived, very rustic, and in its places of origin it is important for wood, similar to mahogany, heavy, homogeneous, easy to work and which is used for panels and furniture. In Europe the species is widespread above all as an ornamental, but recently it has also been used in forestry, as a fast-growing species. The resin that is produced by engraving the bark is called “amber balm” and has a strong aromatic odor.