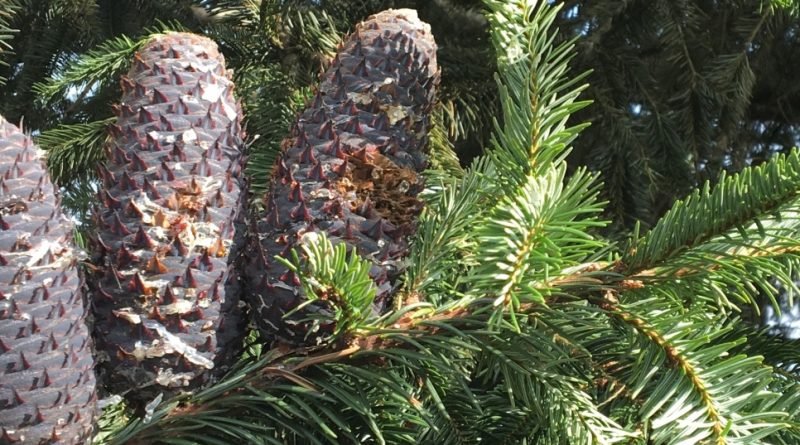 Etymology –
The term Abies comes from Abies which is the classical Latin name (Virgil, Egloghe, from the Sanskrit root abh gush of resin); according to another interpretation it would derive from the Greek word ἄβιος = long-lived.
The specific epithet hickelii was given in honor of the French botanist Paul Robert Hickel (1865-1935).

Geographic Distribution and Habitat –
Abies hickelii is a conifer native and endemic to Mexico where it is present in the following states: Chiapas, Guerrero, Oaxaca, Puebla and Veracruz. Its range is very fragmented with an estimated occupation area of ​​208 km².
Its habitat is that of volcanic soils at altitudes between 2,500 and 3,000 m, where the climate is cool and rainy with typically winter rainfall. There are pure woods at high altitudes, but it is often found in association with Pinus montezumae, Pinus pseudostrobus, Pinus ayacahuite, Cupressus lusitanica and species of the genus Quercus. Among the shrubby plants the most common associations are with the genera Vaccinium, Andromeda, Ribes and Fuchsia. 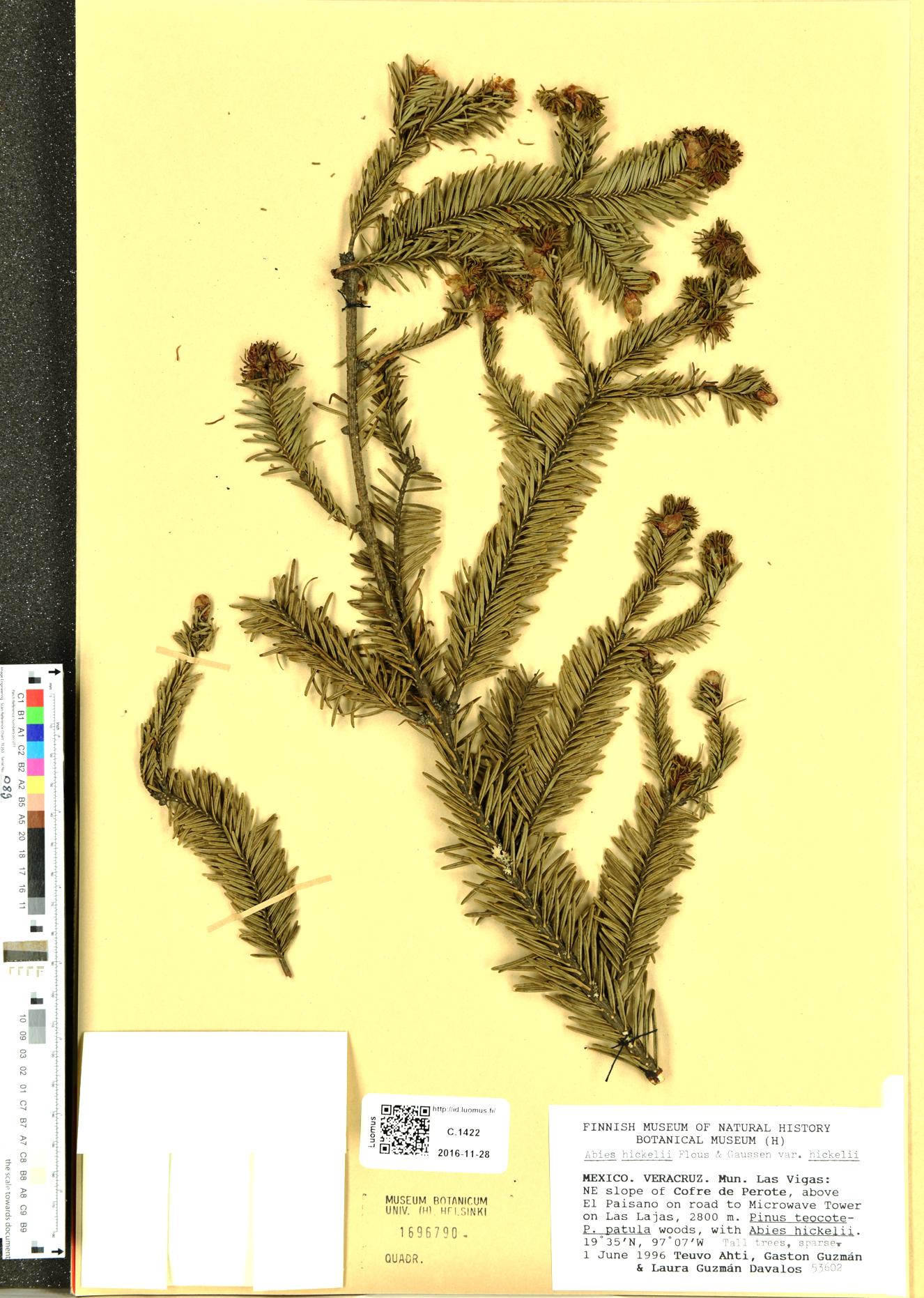 Description –
Abies hickelii is a tree that reaches 30 m in height.
The trunk can reach 130 cm in diameter, with a conical bearing, less regular in the long-lived specimens, with a bark, initially gray and smooth, which with age forms quadrangular plates.
The main branches are horizontal, or ascending; the secondary branches are red-brown or purple, glabrous or slightly pubescent. The buds are ovoid, resinous, 5×4 mm; the pearls that cover them are brown, triangular, persistent for years.
The leaves are needle-like, glossy, light green, up to 3.5 cm long, spirally arranged or arranged in two lateral rows in the shaded parts of the foliage, inclined forward in the parts exposed to the sun, with marginal apex or sometimes obtuse.
The female strobili are initially purple in color; they become darker when ripe and are oblong-cylindrical in shape, with obtuse apex, 6-8 cm long and up to 3.5 cm broad, with a short peduncle; the scales are wedge-shaped, 1.5 cm long, 2 cm wide, smooth.
Male strobili are short, yellow with red microsporophylls.
The seeds, light brown in color, are about 6-7 mm long, with a light brown wing of 1 cm.

Cultivation –
Abies hickelii is a conifer that grows in Mexico, in the areas of: Guererro, Oaxaca and Chiapas at 2500-3000 m above sea level. These are areas with a cool, oceanic, wet winter climate and, from a pedological point of view, characterized by volcanic soils. In these areas it occasionally forms pure populations (at higher altitudes), but usually mixed populations with: Pinus montezumae, P. pseudostrobus, P. ayacahuite, Cupressus lusitanica and Quercus spp., Below we find a shrub layer in which we can find Vaccinium spp., Andromeda spp., Ribes spp. and Fuchsia spp.
It is a plant that withstands minimum temperatures between -12.1 ° C and -6.7 ° C).
Propagation occurs by seed.

Customs and Traditions –
Abies hickelii is a rare plant which, in its range, is rarely and then accidentally harvested for timber.
It is a plant which, as well as being rare in nature, is even more so in cultivation; we find it largely limited to botanical gardens in the warm-temperate climate zones.
In any case it is a rare species and therefore of local use, whose wood is used for small carpentry jobs.
This species is listed as endangered in Mexico under NOM-ECOL-059-94. The IUCN lists both the species and both subspecies, separately, as “endangered”. In fact, with a very fragmented range, and an uncommon presence, it is classified among the species at risk of extinction in the IUCN Red List.
The threats are related to deforestation and anthropogenic practices still in place in southern Mexico for which environmental protection policies are necessary, with the establishment of new protected areas.

Preparation Method –
Abies hickelii is a conifer whose use, albeit limited to its growth range, is exclusively related to its timber.
There are no known uses in food or medicine.