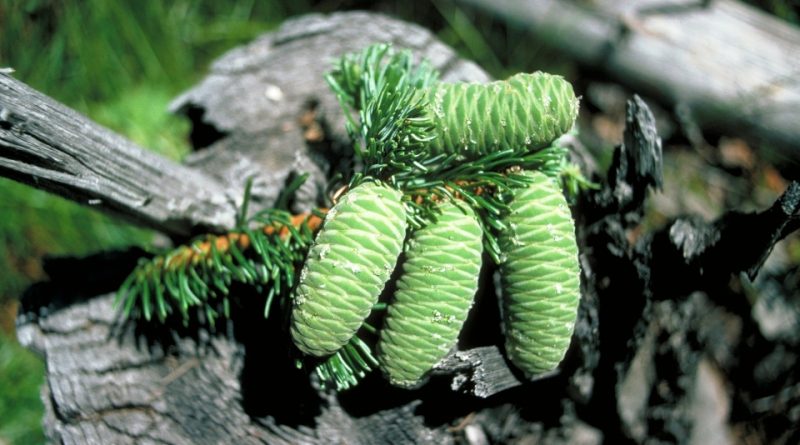 Etymology –
The term Abies comes from Abies which is the classical Latin name (Virgil, Egloghe, from the Sanskrit root abh gush of resin); according to another interpretation it would derive from the Greek word ἄβιος = long-lived.
The specific epithet grandis refers to the large size reached by this species.

Geographic Distribution and Habitat –
The Grand fir is a conifer native to the regions bordering the Pacific coast of North America, in particular between Canada (British Columbia) and the United States (California, Idaho, Montana, Oregon and Washington).
Its natural habitat is that of altitudes between sea level and over 1,800 m, on granite or basaltic soils with a preference for alluvial ones. The reference climate is varied, ranging from humid maritime, with annual rainfall between 500 and 2,500 mm, to the colder and continental climate of the interior, with snowy winters and annual rainfall between 500 and 1,250 mm. It can form pure woods especially in Idaho, most commonly in association with Pseudotsuga menziesii, Abies amabilis, Picea sitchensis, Calocedrus decurrens, Thuja plicata, Tsuga hetrophylla and Larix occidentalis, Acer macrophyllum, Alnus rubra and Fraxinus latifolia. 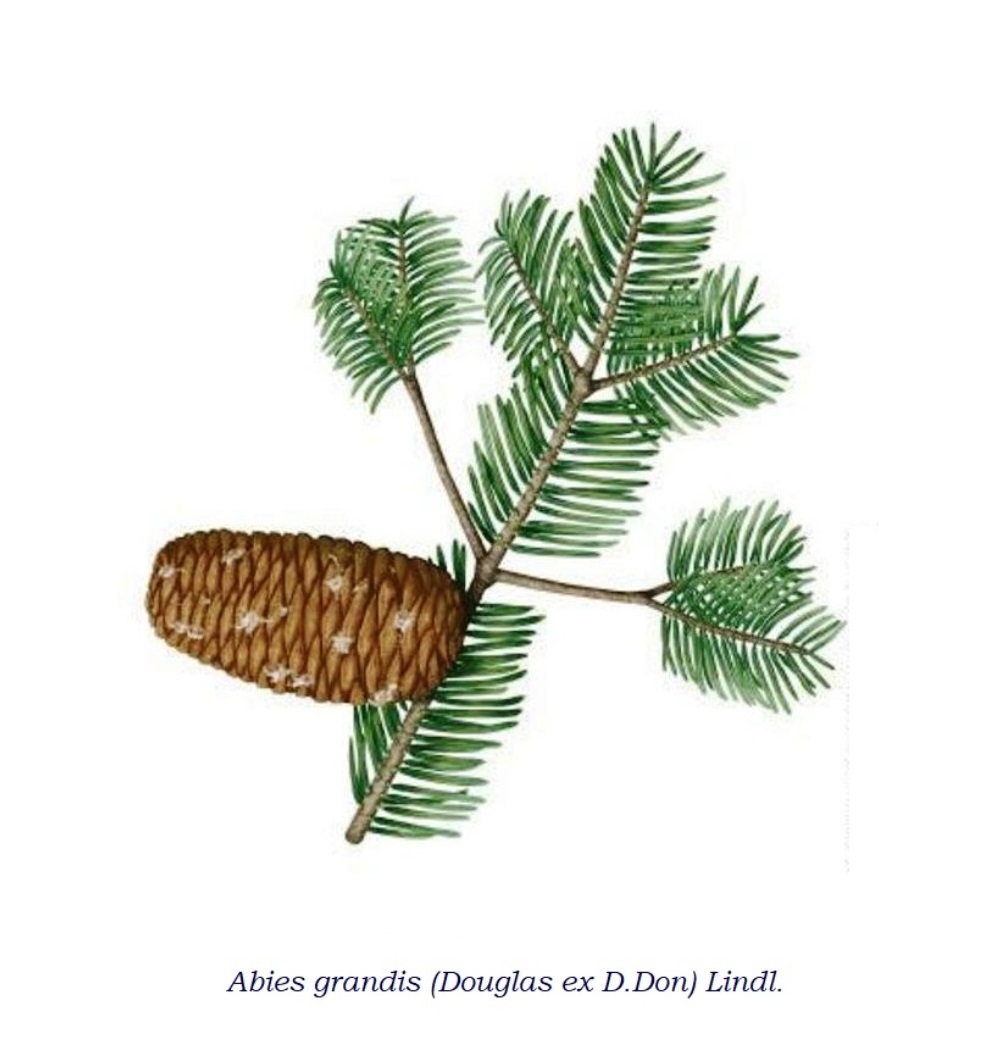 Description –
Abies grandis is a conifer of impressive size, with a conical shape and a flat top in a long-lived age, which reaches heights of 75 m.
The trunk can reach 150 cm in diameter and the bark is smooth and gray, which with age becomes brown and wrinkled with reddish periderm visible in the deep furrows.
The main branches are scattered, ascending; the secondary twigs are opposite, light brown, pubescent. The resinous buds are round in shape, purple, brown or green, with a rounded apex; the pearls that cover them are short, triangular, resinous, slightly hairy, with an entire margin and a sharp point.
The leaves are needle-like, glossy green, up to 6 cm long, with a notched or slightly rounded apex.
The female strobili, of light green, dark blue, purple or gray color, are cylindrical, up to 7 cm long and up to 3.5 cm broad, sessile, with a rounded tip; the scales are covered with thick down, 2,5 cm long, 2,5 cm wide.
Male strobili are bluish-red, purple, orange, yellow or green. The seeds, brown in color, are up to 8 mm long, with a 12 mm brown-pink wing. The cotyledons are usually 5-6.

Cultivation –
Abies grandis is an immense fast growing evergreen tree and its large size makes this species an important wood tree, even if its main use is for the pulp. It is commonly harvested in the wild and is also often grown. The tree has a vast typology of traditional uses; from food, to medicine and as a source of materials. It is also widely grown in gardens, with many cultivars developed, and is considered an excellent ‘Christmas tree’.
This plant is found in the temperate zone where it grows from sea level to over 1,800 meters. Vegeta where the climate is from humid to humid maritime, with average annual rainfall between 500 and 2,500 mm, and also in inland mountainous areas where winters are snowy and cold and average rainfall varies from 500 to 1,250 mm.
This dormant species is very cold tolerant, but can be subject to late frost damage due to new vegetation.
From a pedological point of view, it prefers slightly acidic conditions up to a pH of about 5 and soils that are humid but not impregnated with water. It grows well in heavy clay soils and succeeds in poor sandy soils.
It is also a very shade tolerant plant, especially when young, but growth is slower in dense shade.
It is intolerant to air pollution and can grow in very exposed locations; even if the top breaks the trees reject one or more new tops and continue to grow without loss of vigor. It also prefers to grow on a north-facing slope.
The trees grow slowly for the first few years, but then they are quite fast with individuals growing 60 – 100cm in height and 8cm in circumference per year even when they are quite large.
The new vegetation occurs between mid-spring and mid-summer.
Trees should be planted in open fields when they are quite small, between 30 and 90 cm in height. Larger trees take root and root badly.
Propagation is by seed. Sowing takes place in late winter in a greenhouse or outdoors in early spring. Germination is often poor, usually taking about 6 – 8 weeks. However, stratification is recommended which produces a more uniform germination, so it is best to sow the seed in a cold seedbed as soon as it is ripe in autumn.
The seed remains viable for up to 5 years if well preserved.
The newly formed young seedlings must first be placed in pots and then transplanted, after spending the first winter in the nursery, in the following spring.

Customs and Traditions –
Abies grandis is a conifer that, due to fire suppression, was able to proliferate in areas previously dominated by the relatively fire resistant Douglas fir, ponderosa pine and western larch.
Native Americans used both this plant and silver fir, dusting the bark or pitch to treat tuberculosis or skin ailments; the Nlaka’pamux used the bark to cover the lodges and make canoes, and the branches were used as litter.
The inner bark of Abies grandis was used by some Indian tribes of the plateau to treat colds and fever. The Okanagan-Colville tribe used the species as a strengthening drug to nullify the feeling of weakness.
The foliage has an attractive citrus scent. It is sometimes used for Christmas decorations in the United States, including Christmas trees, although its stiff branches do not allow it to be packed economically. It is also planted as an ornamental tree in large parks.
Among the edible uses it should be remembered that the inner bark is consumed cooked. It is usually dried, ground into a powder and then used as a thickener in soups, etc. or mixed with cereals to make bread.
This is best consumed in spring, when it is rich and juicy. It is a food, however, that is mostly used in times of famine.
Hardened trunk gum (probably in cold water) is used as chewing gum and can also be made into a drink.
The tips of the young shoots are used as a tea substitute.
In medicinal use, the gum that exudes from the bark is used; this is antiseptic, laxative and tonic. A decoction is used to treat stomach problems.
The gum is used externally as an ointment and applied as a compress to cuts and sores.
It has also been used as a wash for sore and infected eyes and as a gargle for sore throats.
A decoction of the bark or root stem is used in the treatment of stomach problems and tuberculosis.
A poultice is also applied to the joints to relieve rheumatism or to the chest to treat pulmonary hemorrhages.
A decoction of the leaves is used as a tonic and in the treatment of colds.
Among other uses, it should be remembered that the aromatic leaves are used as a repellent for moths and the branches have been used at home as incense.
An essential oil obtained from the whole plant is used as an ingredient in commercial cosmetic preparations as a masking agent.
A pink dye can be obtained from the bark.
Dry, hardened pitch can be chewed as a tooth cleaner.
A powder made from the dried and crushed leaves was used as talcum powder by the North American Indians.
The bark can be used as a waterproof roofing material for buildings and canoes.
The wood is light, soft, coarse-grained, not very strong, not very durable and is used for interior work, cases, etc. It is of little value and is mainly used for the production of wood pulp and fuel.
From an ecological point of view, this plant is very important for birds and insects that use it as a shelter, for nesting and for larger animals, such as black bears, who use it as a shelter.
Although Abies grandis has been deforested in the past and in the present in many parts of its range, nevertheless this species regenerates well. To date, the deforestation of the plant is not a serious conservation problem at the species level. The plant is classified as “Least Concern” on the IUCN Red List of Threatened Species (2013).

Preparation Method –
Abies grandis is a plant with multiple uses.
In the food sector, the internal bark is used which is consumed cooked and used, often dried and ground into powder, as a thickener in soups, etc. or mixed with cereals to make bread.
Hardened trunk gum (probably in cold water) is used as chewing gum and can also be made into a drink.
Tea is made with the tips of the young shoots.
In the medical field, rubber is used; it is also decocted from the bark or from the root or poultices prepared.
This plant also prepares decoctions prepared with the leaves that are also used against woodworms.
The branches were used in the home as incense.
The essential oil is used as an ingredient in commercial cosmetic preparations and as a masking agent.
A pink dye can be obtained from the bark.