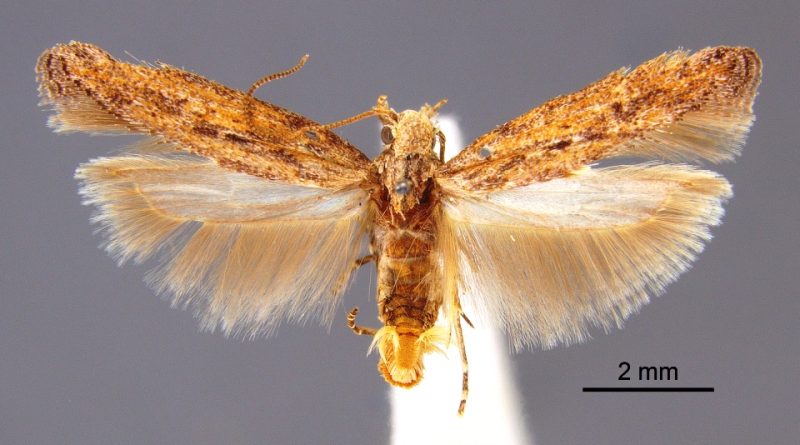 The Potato tuber moth or tobacco splitworm (Phthorimaea operculella Zeller, 1873) is a moth belonging to the Gelechiidae family.

Geographic Distribution and Habitat –
The Potato tuber moth is a moth of American origin but has now become cosmopolitan even if it prefers subtropical, tropical and Mediterranean climates. This insect is commonly found in Africa, Asia, Europe, South America and Oceania. In total, this moth has been reported in more than 90 countries.
Its habitat is typically that of the areas close to the cultivation of potatoes or, in any case, of Solanaceae. This moth has been seen to feed on various genera of the Solanaceae family such as tobacco plants (Nicotiana tabacum), eggplants (Solanum melongena), tomatoes (Lycopersicon esculentum) and peppers (Capsicum annuum).
Temperature is an important factor in the survival and development rate of P. operculella and is typically found in warmer climates, preferring subtropical and tropical habitats.

Morphology –
The adults of Phthorimaea operculella are recognized by having a wingspan of about 12-15 mm, with gray-brownish, marbled front wings, which have scattered blackish spots; the hind wings are clearer and more uniform.
The larvae have a length of about 10-12 mm and are whitish in color, with pink or brownish dorsal shades. As the larvae mature, their color changes from white to yellow to pink-green. The thorax contains small black spots and bristles on each segment.
The pupae are narrow and usually 12-13 cm long and are usually white in color.
Eggs are typically oval in shape, smooth and pearly white to yellowish in color.

Attitude and Life Cycle –
The Potato tuber moth overwinters in the larval stage or as a chrysalis, both in the ground among the residues of the infested vegetation of the previous year, and in the warehouse, always inside the infested tubers. The activity of this moth resumes at different times depending on the habitat where it develops and therefore on the climatic conditions or if it develops in the field or in the warehouse.
Females of this moth release a sex pheromone to attract males which has been shown to be composed of tridecadienyl and tridecatrienyl acetates. Males perceiving this pheromone typically exhibit fan-like behavior and walk in a “zigzag” path to the source.
Adult females of P. operculella can lay over 200 eggs in their lifetime, depending on environmental conditions. Eggs usually take about five days to hatch. Eggs can be laid on the ground next to a favorite host plant, but are typically laid near the leaf veins, between the bud and stem, or under the stem.
Females possess a rare egg-laying process in which the ovipositor contains sensors that pick up chemical signals emitted by the host plant. Therefore, adult specimens only need to be in the vicinity of a host plant to spawn.
Generally outdoors, the activity is resumed at the end of March-April with the adults fluttering, mating and laying on the vegetation. Oviposition can occur at the base of the buds, at the insertion of the leaves on the stem, but also in storage on the preserved tubers.
Often there is a migration of adults from warehouses to cultivated fields, where they lay eggs.
The newborn larvae initially “undermine” the leaves, then dig tunnels on the stems and finally reach the tubers where they dig the typical tunnels described; the larvae feed on the host plant for up to two weeks before becoming pupae.
In the warehouse the tubers are hit immediately and directly; direct penetration into the tubers generally occurs in correspondence with the buds.
The Phthorimaea operculella can develop from 3 to 6 generations during the year; however in very hot environments the number of generations can be even higher.
The damage occurs on all parts of the plant and is determined by the larvae. Their presence is visible on the leaves due to mines practiced by the young larvae; on the stems the larvae dig small tunnels instead.
The tubers, where there is the greatest damage, can be attacked both in the field and in the warehouse, during storage.
The damage to the tubers consists in the presence of tunnels dug in the amyliferous parenchyma and covered by characteristic whitish silky formations, very evident in section. These tubers are then subject to subsequent degenerative phenomena and / or rot, due to the aggression by wound pathogens.

Ecological Role –
Phthorimaea operculella is an oligophagous insect that feeds on the Solanaceae plant family and is particularly known to be an important pest of potato crops.
Farmers currently use insecticides, pests and sprinkler irrigation to prevent P. operculella from infecting their farmlands.
To contain this insect, biological control techniques are being experimented and tested.
For example, the larval parasite Apanteles subandinus has been introduced and used. This pest kills the moth towards the end of its larval stage and has been found to be able to control leaf infestations of the potato tuber moth. In South Africa, the spider Selenops radiatus has proven to be an effective control agent for this species. The Diadegma mollipla wasp, which also exists in South Africa, is a parasite of moth larvae.
At present, the fight against Phthorimaea operculella is guided and integrated and makes use of multiple agronomic, biotechnological and chemical interventions.
However, it is advisable to carry out monitoring with pheromone traps, both in the field and in the warehouse, which allow to follow the real consistency of the phytophagous populations; on the basis of the indications of the monitoring, appropriate measures can be set:
– agronomic prophylactic: choice of the moment of sowing;
– rational chemical interventions with a view to guided struggle.
Traps must be installed:
– in the field: in the second half of March, with a density of 1 trap per hectare;
– in the warehouse: in the case of room temperatures above 10 ° C, they must be maintained all year round, with a density of 1 trap per room (lower temperatures are unfavorable to the life and activity of the phytophagous).
In stock, pheromones can also be used in funnel sex traps, for mass capture; in addition, all those precautions that allow the isolation of the environments (nets on the windows) from the outside must be implemented in the warehouses.
Finally, the temperature of the warehouses must be kept at relatively low levels, to hinder the activity of the phytophagous.
The chemical fight in the open field is carried out, following the flight of the adults and in correspondence with the first larval infestations on the leaves, with 1-2 treatments. However, the aid of the chemical fight has been carried out so far without taking into account the possibility of intervening on various factors such as:
– Implementation of agroecological techniques with the insertion of associations and rotations to reduce the phytophagous / host plant ratio;
– Cultivation of plants in areas less suitable for the phytophagous.