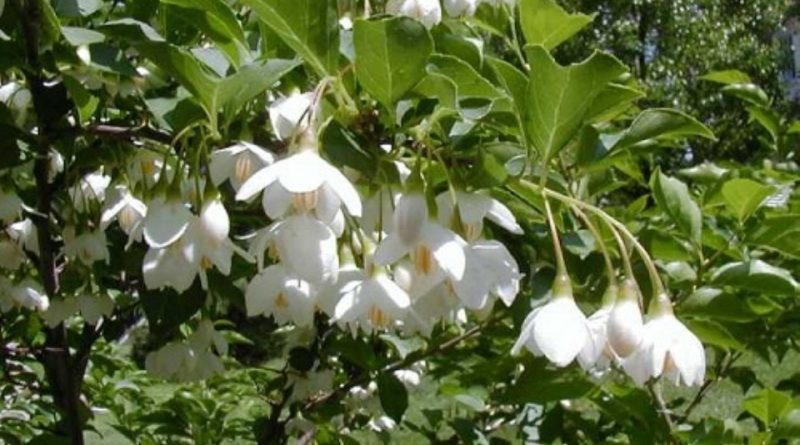 Etymology –
The term Styrax comes from the Greek στῠραξ stýrax styrax, an aromatic resinous plant; according to some authors this name is derived from the Arabic as (si) tirax, resin that is extracted from different plants of the genus, according to others it is the Arabic name that derives from the ancient Greek.
The specific benzoin epithet comes from bɛnzoʊ.ɪn or benjamin due to the balsamic-smelling resin obtained from the bark.

Geographic Distribution and Habitat –
Styrax benzoin is a plant of the Styracaceae family widespread in Indonesia and present in eastern Asia: India, Myanmar, Thailand, Malaysia, Cambodia, Laos and Vietnam.
Its habitat is that of tropical rainforests and dense woods and swamps between 100 and 1,600 m. s.l.m .. 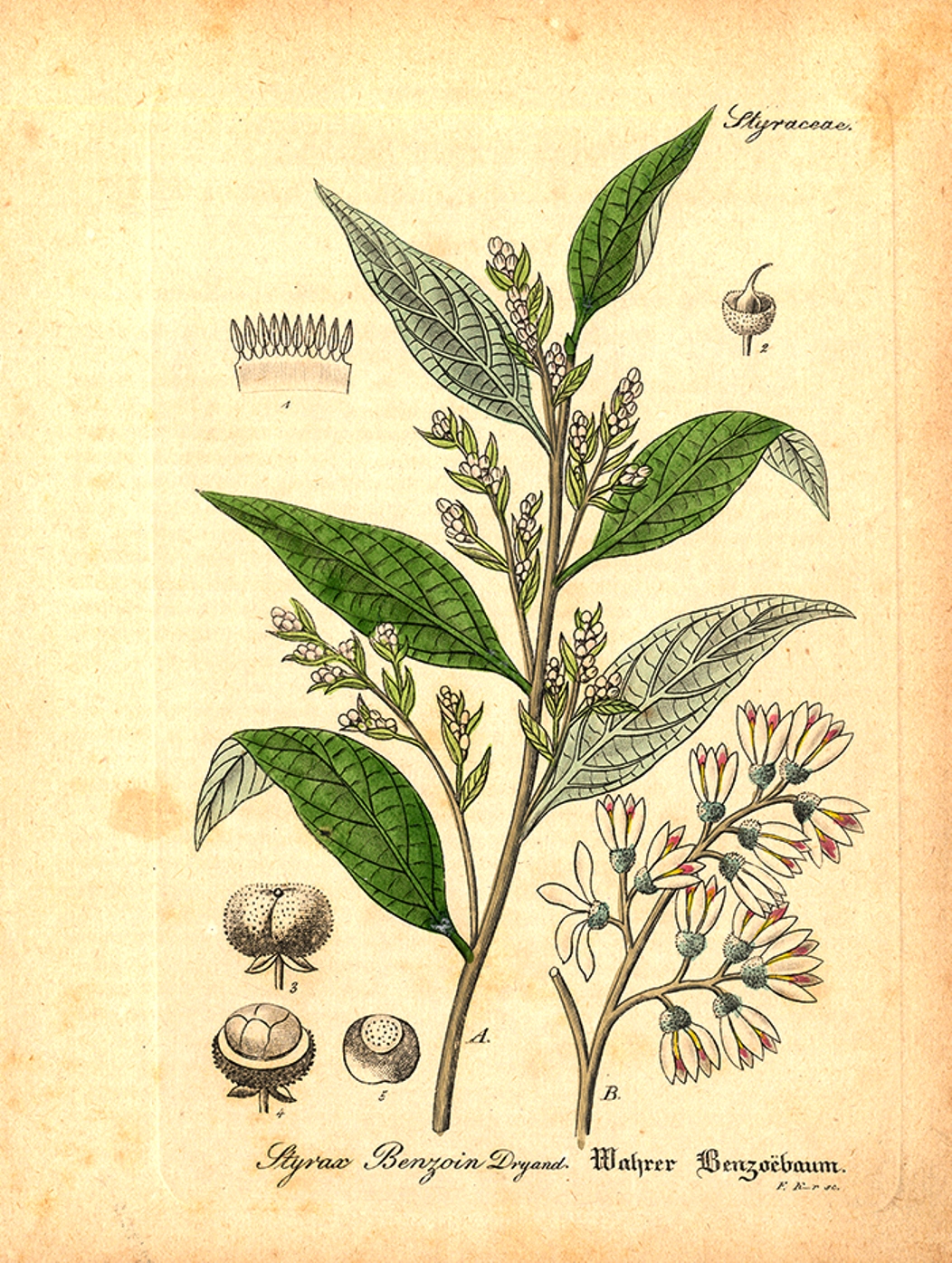 Description –
Styrax benzoin is an arboreal or shrubby plant that can grow up to about 12-30 meters in height.
The trunk can reach a diameter between 10 and 100 cm.
The leaves are alternate, ovoid in shape, with evident veins.
The flowers are white, fragrant and sweet carried in racemic inflorescences.
The fruit is a capsule.
Styrax benzoin can live up to an age of 70-100 years.

Cultivation –
Styrax benzoin is a plant that, in its natural state, prefers the primary forest mixed with clay-rich soils while it is less common in dense secondary forests.
This plant is also grown as the main source of benzoin resin in Indonesia. It is also grown as an ornamental shade tree in West Africa.
The plant expels a scented balm when pressed or pounded and is the main source of the scented gum, which takes its name, in fact, benzoin.
In local traditions this plant is also used in its natural state for local medicinal use but is cultivated in tropical Asia.
It is in fact a plant of the humid and lowland tropics, where it is usually found at altitudes of 100 – 700 meters, exceptionally up to 1,600 meters.
It grows in areas where the average annual rainfall is usually 1,500 – 2,200 mm, without a distinct dry season (or just a few drier months), however, in cultivation it will thrive in areas with average annual rainfall of up to 1,300 mm with 3 – 6 dry months.
The average annual temperature in its natural habitat is 15 – 26 ° C, but it can tolerate extreme temperatures up to 4 ° C and up to 45 ° C for a short time.
From a pedological point of view, it prefers a moist but well-drained soil, free of limestone, clayey and a position in full sun or partial shade.
It grows best in the company of other trees and shrubs, as long as root competition isn’t too intense.
Propagation can take place both by seed and by cuttings of semi-mature wood.

Customs and Traditions –
Styrax benzoin was described by Jonas Carlsson Dryander and published in Philosophical Transactions of the Royal Society of London 77 (2): 308, vol. 12, in the year 1787.
It is a plant present in its natural state but cultivated in various parts of tropical Asia but which, according to experts, reaches the best quality in Sumatra for the quality of the scented resin that is extracted and used in perfumery.
Common names for the tree are: benjamin gum tree, loban (in Arabic), kemenyan (in Indonesia and Malaysia), onycha, and Sumatran benzoin tree.
This plant gained some popularity in Europe towards the end of the 16th century and is now widely used around the world as incense and in the flavor, fragrance and pharmaceutical industries.
It is probably best known as an ingredient in the herbal preparation ‘Balsamo del Frate’.
Among the various uses we remember both food and medicine or for the cosmetics and perfumery industry.
In food use, rubber obtained from the bark is used as a flavoring in the food industry.
It is used in particular in the production of flavors of chocolate, ice cream, dairy products, syrups and other products.
It is popular in Scandinavia as a flavoring in baked goods containing vanilla or cassia, where it also serves to “fix” other flavors and increase their spiciness.
In medicinal use, benzoin gum contains is used for varying amounts of cinnamic, benzoic and sumaresinolinic acid esters; free acids such as benzoic acid; benzaldehyde and vanillin.
It is strongly antiseptic, carminative, expectorant and astringent.
In Chinese medicine it is considered a circulatory stimulant.
Taken internally it acts to calm some pains, to stimulate cough and to disinfect the urinary tract.
It is used in the treatment of coughs, colds, bronchitis, sore throat.
Benzoin, in the form of a tincture, is inhaled with steam to relieve phlegm, laryngitis, bronchitis and upper respiratory disorders.
It is used externally on wounds and ulcers to heal and disinfect affected tissue. It is also used for the prevention and treatment of cold sores, for the treatment of warts, and to refresh and soothe dry skin and improve skin allergies.
Gum is also used in aromatherapy, where it is considered a sedative.
Among other uses, it should be remembered that rubber is used as an antioxidant in cosmetics and as a fixative in perfumes. The best benzoin extracts are used for the manufacture of scented products, namely: personal health care products such as toilet soaps, shampoos, body lotions and creams; household and other products such as liquid soaps, air fresheners and washing detergents.
The resin is also very soluble in ethyl alcohol and a solution is obtained from it used as an additive for shellac, to which it gives greater brilliance and improves its smoothness in the pad varnishing of wooden items.
One of the important functions of gum is to act as a fixative for other perfumed substances, increasing the toughness and preventing the loss of the middle and top notes of the more volatile components.
Rubber is used to make incense sticks. Most commonly, small or crushed pieces of the crude benzoin, in the form of a semi-finished block, are simply placed on an open fire, in the home or place of worship.
It is sometimes mixed with other natural scented resins such as frankincense (Boswellia spp.), Myrrh (Copaifera spp.) And styrax (Liquidambar orientalis).
Among the components present in this resin we remember: vanillin, benzoic acid, coniferil benzoate, cinnamyl benzoate.
As for any contraindications, please note that benzoin essence is neither toxic nor irritating, but can cause sensitization effects.

Preparation Method –
Rubber is obtained from deep incisions made in the bark of trees that are at least 7 years old.
The process of tapping and collecting the incense takes a year. The styrax benzoin tree trunk is cut slightly, so that the white sap exudes. After 4-6 months the sap hardens on the trunks. The sap that has been collected is not clean and is dried for 3-6 months to remove impurities. After the sap has dried, it is ready for export.
Benzoin gum is an ingredient in the patented preparation “Il balsamo del frate”. It is an antiseptic and expectorant vapor inhalation for sore throats, colds, asthma and bronchitis.
In Chinese medicine it is considered a circulatory stimulant.
Benzoin, in the form of a tincture, is inhaled with steam to relieve phlegm, laryngitis, bronchitis and upper respiratory disorders.