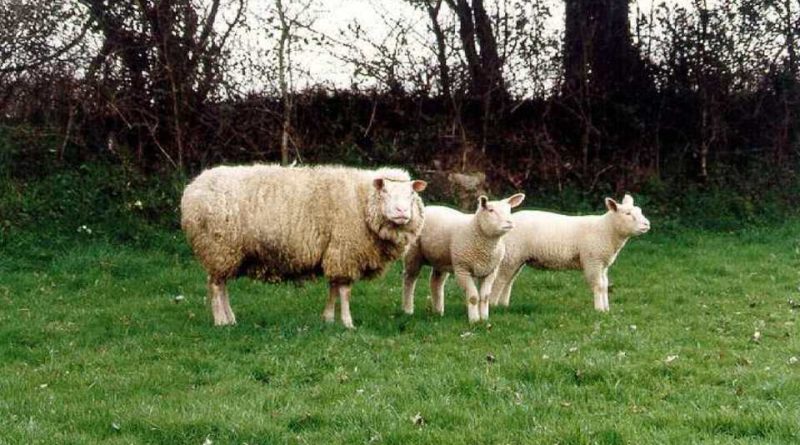 The Cotentin sheep breed is an Italian sheep (Ovis aries Linnaeus, 1758), originally from France, with a main aptitude for meat production.

Geographic and Area Distribution –
The Cotentin is a rustic sheep breed originating from the Cotentin, which is a peninsula of France, in the western Normandy area or Lower Normandy, on the border with Brittany, which extends into the English Channel.
This breed is currently bred in the “bocage” which is the typical agricultural landscape of Normandy where the fields are defined by natural enclosures of the Manche.
These are areas characterized by pastures in meadows covered daily by the tides, and therefore protected by the Appellation d’Origine Contrôlée (AOC) “Agneaux prés-salés du Mont-Saint-Michel”.
The AOC of the prés-salés lambs of Mont-Saint-Michel extends over a large number of municipalities in the departments of La Manche, Ille-et-Vilaine, Calvados, but also Côtes-d’Armor and Mayenne.

Origins and History –
The Cotentin breed was born from the crossing of local sheep populations of the early nineteenth century with English breed rams such as the Southdown, but above all the Kent and Leicester. From 1860, the breeders of Normandy began to select the fruit animals of these crossings, and the current breed was established around 1900.
The Cotentin breed is one of the seven breeds authorized to produce so-called “pré-salé” (ie salty meadows) lamb, which graze in the meadows covered daily by the tides, and therefore protected by the Appellation d’Origine Contrôlée “Agneaux prés-salés du Mont-Saint-Michel ”.
The Cotentin is a rustic, grazing sheep breed from the West of France, and takes its name from the territory of the same name, where its breeding was linked to that of racehorses. In fact, every large “haras” (horse riding station) in La Manche had its own flock of “Cotentine” sheep that lived most of the time in an integral wild state.
Currently there are about 200 sheep also divided into 15 farms, subjected to the controls of the Union de promotion de la race. But also considering those not purebred, the herds are a thousand and 5000 sheep raised. The Cotentin breed is considered today one of the breeds at risk, because the number of animals is increasingly reduced.

Morphology –
The Cotentin sheep is characterized by having a large pink head and has a long body, with a very broad and flat back and well-lowered legs.
It also has a fairly broad and concave muzzle and a broad forehead marked by very prominent eye sockets. Its ears are large and horizontal and almost transparent.
Both males and females are acorna.
It has rather short limbs, with solid bones and ending with white claws. The hair is thick and white with 12 cm long wool, with fibers of 35 microns in diameter. This does not cover the head and stops at the knees and hocks. Wool can weigh up to 6 or 7 kg in the male.
The average weight is 140-150 kg for males and 80-90 kg for females.

Productive attitude –
The Cotentin sheep breed is famous for the calving period, which takes place once a year from mid-December to the end of March, because their prolificacy rate can reach up to 180%, a figure that makes them one of the most prolific French breeds with lambs reaching 20 kg which are often sold for the Easter holidays.
In addition to its prolificacy it is also known for its rusticity, the breed can resist the difficulties of grazing in the salt marsh: rigorous climatic conditions, risk of sinking into the ground, long walks, halophytic vegetation, etc.
For more than a thousand years these sheep have been grazing in the prés-salés of the Mont-Saint-Michel Bay and the “Havres” region (small port towns).
Cotentin is considered a party food due to its great organoleptic qualities: it is a marbled meat (with a lot of intramuscular fat), juicy, pink in color, with long fibers and a certain persistence in the mouth.
Furthermore, as mentioned, the Cotentin sheep is one of the seven breeds authorized to produce so-called “pré-salé” (ie salty meadows) lamb meat.