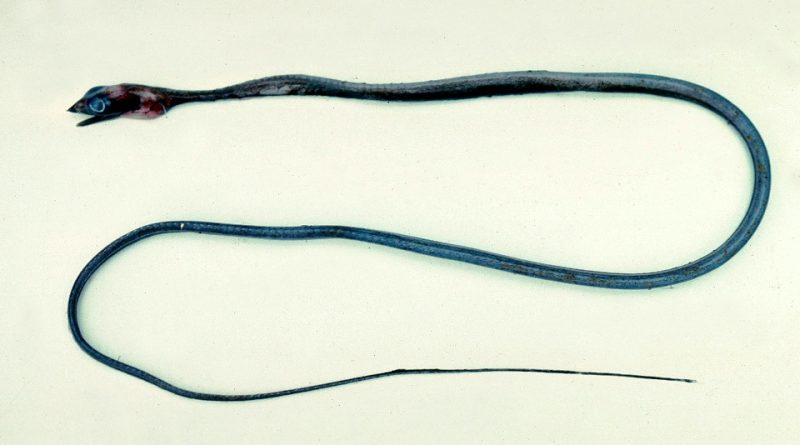 The slender snipe eel (Nemichthys scolopaceus Richardson, 1848) is an abyssal fish of the Nemichthyidae family.

Geographic Distribution and Habitat –
Nemichthys scolopaceus is a cosmopolitan fish widespread in all seas and deep oceans, with the exception of the Arctic and Antarctic ones.
It is present, although not common in the Mediterranean Sea and in Italian waters, while there are no reports in the Adriatic Sea. It is present in the Ligurian Sea, the Tuscan archipelago, the Gulf of Asinara. In Messina the beach frequently.
Its habitat is that of deep waters up to about 4000 meters deep, although it is usually found up to 1000 meters.
It is a fish that has deep pelagic life and is sometimes found in shallow water, especially when they are individuals in poor health. In cold seas it can frequent waters at a depth of only 100 meters.

Description –
The Nemichthys scolopaceus is recognized for having a long body, which can exceed one meter in length which, starting from the anal fin, becomes almost ribbon-like to end in a long filament. The color is dark brown.
The skin is bare with the lateral line consisting of three parallel sets of pores.
The gill openings are covered with a dermal fold.
The head, equipped with numerous series of pores, is distinct from the trunk, as the body narrows at the height of the gill openings.
The eye is almost circular in shape with an iris with blue-green reflections; it is large, so much so that it touches the forsal profile above and the maxilla below. The nostrils are close together.
The muzzle is formed by a kind of stiff, thin and curved upward beak, contrasted by a downward curved mandible. The teeth are tiny and numerous in both jaws and slightly curved back.
The dorsal fin at the beginning and end is formed by thin rays and in the central area by rays that resemble spines. The anal fin begins under the pectorals and has only thin rays. The pectorals are developed but small.
Its larvae are leptocephalic and are shaped like leaves, which actually shrink before turning into adults.

Biology –
Nemichthys scolopaceus is a fish which reproduces by deposition of the eggs; the females lay their eggs and the males their sperm in the water at the same time.
Reproduction occurs only once in their lifetime as they die after spawning. It is difficult for scientists to research these organisms as the extreme environment they inhabit and the conservation status of this species are not known.
The maximum life span of this fish is around 10 years.

Ecological Role –
Like all abyssal fish, the biology and ecological role of this fish is not well known. However, Nemichthys scolopaceus is a fish that captures small planktonic organisms, especially crustaceans, and hunts by swimming with its mouth wide open.
You fish with trawl nets from deep-sea fishing boats. Some specimens were captured in the winter on the surface.