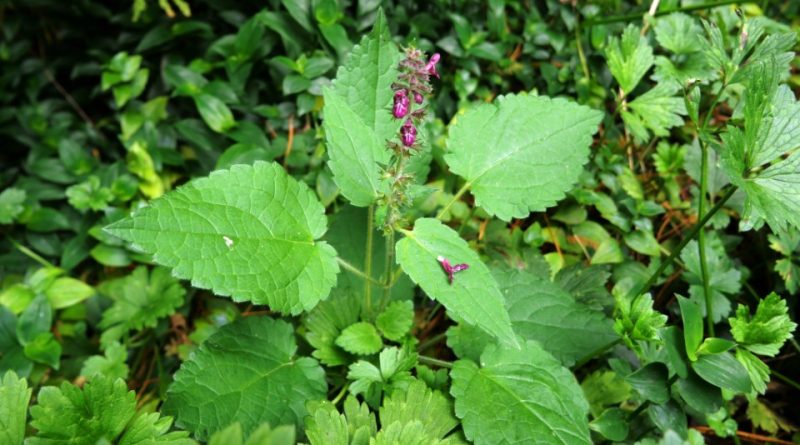 The Whitespot or Hedge Woundwort (Stachys sylvatica L., 1753) is a herbaceous species belonging to the Lamiaceae family.

Etymology –
The term Stachys comes from the Greek στᾰχυϛ stáchys spiga: for the arrangement of the flowers along the stem.
The specific epithet sylvatica comes from sylva selva, wood (less correct Latin form for silva): as a plant that grows in woods, in wild places.

Geographic Distribution and Habitat –
The Whitespot is a species with a vast Eurasian distribution and present in Europe, up to Great Britain, south and east from Norway and Portugal to the Caucasus and the Himalayas.
In Italy it is present in all regions except Sardinia.
Its habitat is that of the neighboring areas of the mesophilic deciduous broad-leaved woods, in the clearings, along the wooded paths, on subneutral loamy-clay soils, quite deep, fresh, humiferous and rich in nitrogen compounds, from sea level to the upper mountain belt. , therefore between 0 and 1700 meters above sea level. 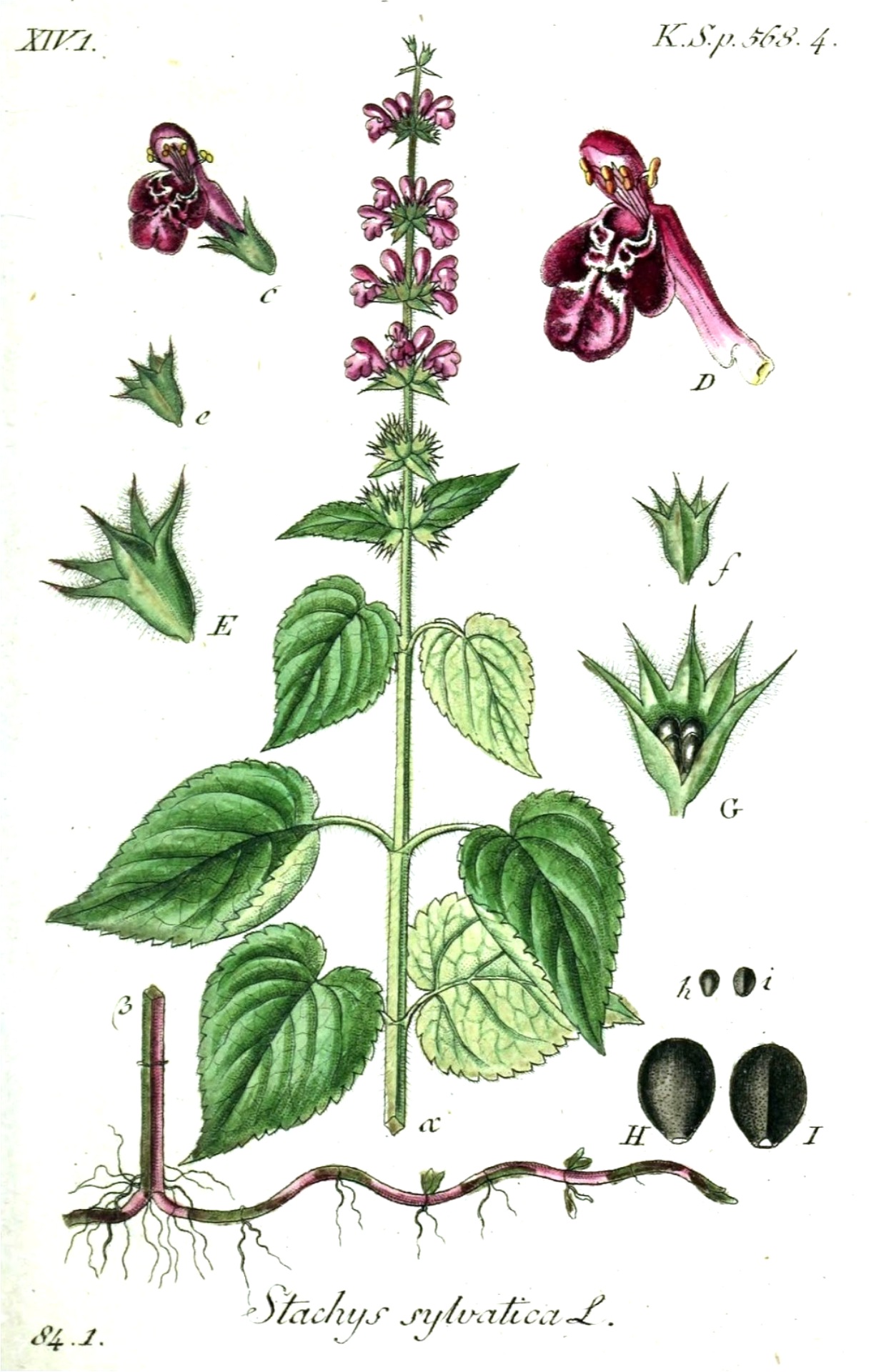 Description –
Stachys sylvatica is a perennial herbaceous plant with stoloniferous roots, which grows up to 90 – 100 cm.
The stem is covered with simple hairs, often patent, whitish in color and with a silky appearance.
The lower leaves are petiolate, ovate, with pointed apex, gradually smaller on the stem, toothed or serrated, with hairy upper lamina, while on the lower face the hairs are mainly on the ribs, all the leaves have a characteristic rib.
The inflorescence is a spike formed from 6 to 19 whorls, each carrying up to 6 flowers, with lanceolate, whole, hairy and ciliated bracts at the base.
The flowers are pedunculated; the calyx has a striated tube, covered with hair, with sharp, ciliated teeth, the corolla is hairy at the mouth, purple in color with white spots on the lower lip up to the mouth, entire upper lip, hairy on the outside, straight, aligned with the tube , the lower lip perpendicular to the tube, divided into 3 lobes, the 2 lateral truncated and the central orbicular. The stamens come out of the flower and are hairy below, the stigma is bifid.
It blooms from June to August.
The fruit is a subglobose nocula, with a wrinkled surface and a dark brown color.

Cultivation –
Stachys sylvatica is a perennial plant that grows mostly spontaneously in places with partial shade, woods, hedges at altitudes between sea level and 1,700 m. s.l.m ..
The plant has been used for some time and collected in nature for some of its uses, especially in traditional medicine.
Pollination occurs through insects (entomogamous pollination): diptera, hymenoptera and more rarely lepidoptera.
The plant basically reproduces by pollinating the flowers.
It spreads by dispersion; the seeds falling to the ground (after being carried for a few meters by the wind – anemocora dissemination) are subsequently dispersed mainly by insects such as ants (myrmecoria dissemination). For this purpose, the seeds have an oily appendage (elaisomi, substances rich in fats, proteins and sugars) which attracts the ants during their movements in search of food.
The plant, as well as by seed, can be propagated by division in spring. Larger divisions can be planted directly in their permanent locations.

Customs and Traditions –
Stachys sylvatica is a plant whose leaves and inflorescences were used, especially in the past, as febrifuges, expectorants and vulneraries.
The plant has medicinal properties and can be used as a diuretic, emmenagogue, constipation, tonic.
The whole plant gives off a very unpleasant odor when stepped on or stepped on.
However, it is a good plant for bees and other pollinating insects.
Among other uses it is reported that a tough fiber is obtained from the stem that could be used for commercial purposes.
Furthermore, a yellow dye is obtained from the plant.

Preparation Method –
Stachys sylvatica is one of those plants that belongs to an almost forgotten use but which, on the other hand, could play an interesting role both for medicinal purposes and, as mentioned, for other uses.
With the leaves and the inflorescences you can prepare decoctions and infusions with febrifugal, expectorant and vulnerary properties.
An extract is obtained from the plant which is used to produce a yellow dye.