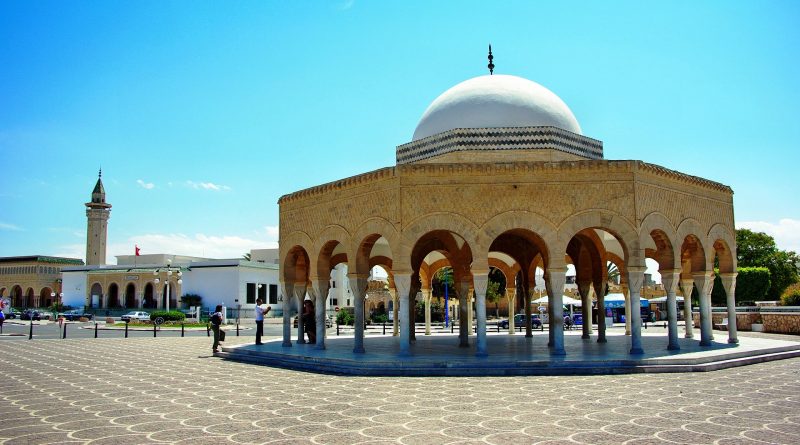 Tunisia is a Republic of North Africa bathed to the north and east by the Mediterranean Sea and bordered by Algeria to the west and Libya to the south and east. It is believed that its name, Tūnus, originates from the Berber language, with the meaning of “promontory” or, more likely, “place to spend the night” (the correspondence with another North African toponym of antiquity can be observed, Tuniza, now El Kala, Algeria).
Tunisia has an area of ​​163,610 km² and a population of 11,551,448 inhabitants (2018).
The capital of Tunisia is Tunis with 1,056,247 inhabitants (2014).

Geography –
Tunisia is the easternmost and smallest of the three states along the Atlas Mountains. It is one of the Maghreb states together with Morocco, Algeria and Libya.
40% of its surface is occupied by the Sahara desert, while much of the remaining territory is made up of particularly fertile soil and about 1,300 km of easily accessible coastline.
The country has a poorly developed hydrographic network. The 365 km long Medjerda River originates in Algeria but winds its way through Tunisian territory before flowing into the north of Tunisia.

Climate –
The climate of Tunisia is Mediterranean, subtropical on the coasts, with mild winters and hot and dry summers, while it is tropical arid or desert inland, with very high summer temperatures (over 45 ° C – 47 ° C ) and scarce rainfall.
On the coasts the summer heat is relatively limited by the sea breezes, in which they generally reach 35 ° C, while when the wind blows from the desert, the temperature can become oppressive.
In Tunis, however, summer temperatures become high and annoying due to the high humidity present. 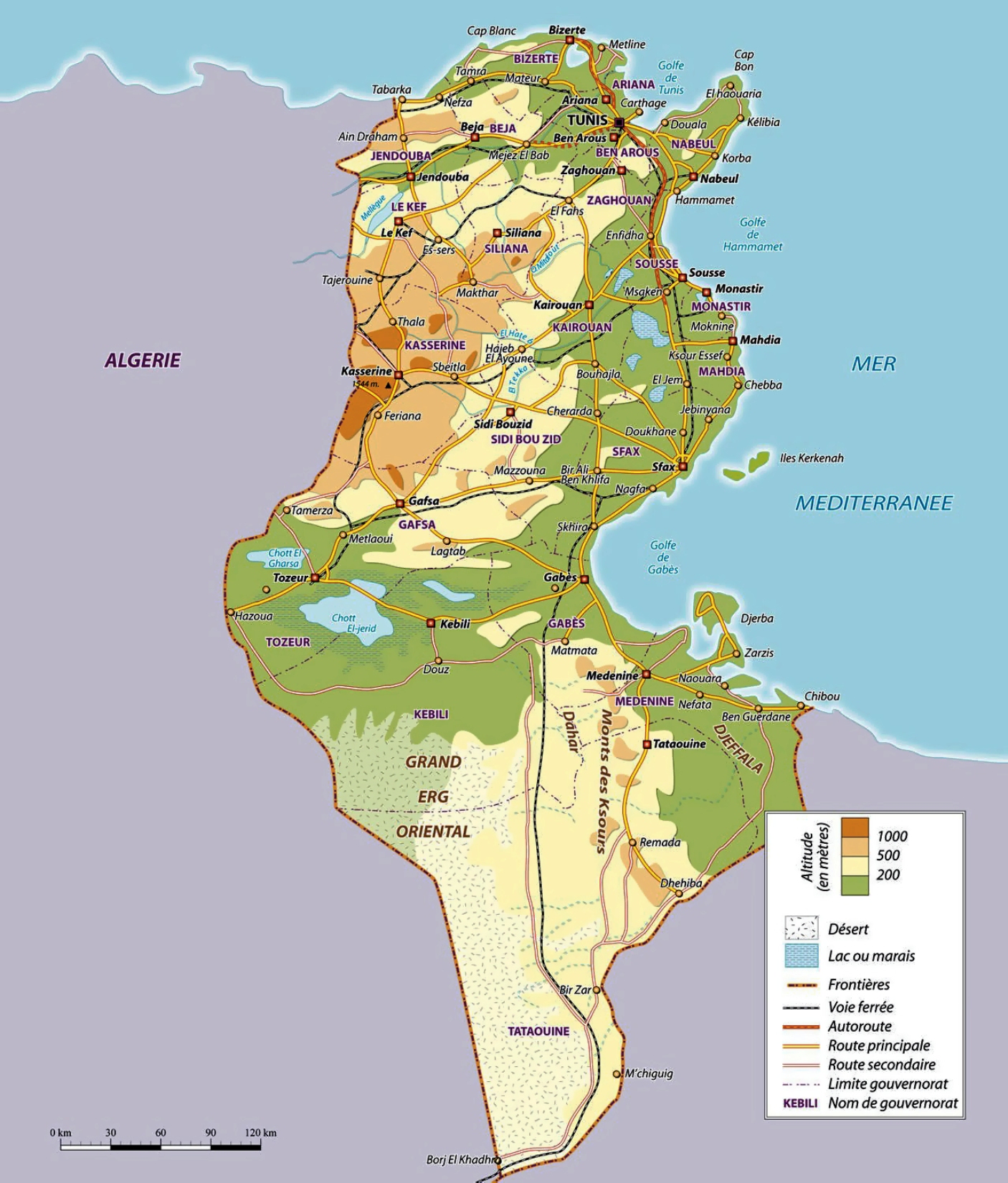 Flora-
Tunisia is a country with not abundant vegetation and towards the interior it fades into the steppe and desert. In the northern area, however, cork and oak woods are very common. In the Tunisian ridge, holm oak, Aleppo pine and oak prevail and in the driest areas Barbary thuja and juniper. On the coast, dwarf palm and mastic are common. In regions with limited rainfall, alpha (poacea) is common, the fibers of which are used for the manufacture of ropes, and in arid and sandy places, drinn, a poacea that serves as a pasture for camels.
The Cape Bon peninsula supplies the cosmetic and perfumery industry with the orange blossoms of Citrus bigaradia (or Citrus aurantium, that is, the bitter orange). Once distilled, the flowers give neroli or zagara oil (the word derives from the Arabic terms “zahara” which means “shine, sparkle with white” and “zahr”, “flower”) which we find in the composition of the perfumes: it is very rare and its cost is particularly high
Among the most common plants we also remember the bougainvillea and jasmine.
Holm oak and cork oak forests characterize the landscape of the Kroumirie Mountains (from the name of the people, the Khrumir) who inhabited them), while eucalyptus is particularly widespread in the northern part of the country. The aleppo pines (also present in Italy) that once covered the plains of the Tell survive today only in a few stretches, while the acacia bush, present in the south, is what survives of the ancient Tunisian savannah.
Olive trees and prickly pears dominate the Sahel region. Another feature of the desert is the rose of Jericho which opens its branches only in contact with humidity.
In the oases there are date palms that offer shelter to many fruit plants.

Fauna –
Although in the coastal regions the Tunisian fauna does not substantially depart from the general physiognomy of the southern coasts of the western Mediterranean, it presents in more internal regions, especially in several groups of Invertebrates, together with the individual character of the entire Maghrib, some old elements of origin Oriental. The fauna of the Vertebrates is clearly of the North African type; some typical elements of the ‘Ibero-Moroccan’ fauna also reach Tunisia, albeit few in number.
Many animal species, given the danger of extinction that threaten them, have been placed under the protection of the government, among them: the addax (an antelope with screw horns), the Berber goat, the oryx (an antelope large size), the ostrich and the fennec (the fox that lives in the Sahara desert).
In Tunisia, the Ichkeul National Park is an important ornithological center, especially in the winter, when the lake waters and marshes represent an appointment for more than 200,000 birds from all over Europe.
Tunisia is also located on the main migratory routes of birds. The avifauna varies according to the habitat and the season: among the most present species the honey buzzard, the marsh harrier, the peregrine falcon, eagles, kites, buzzards, shrike, hoopoe nightingales, quail, woodpeckers and jays, wild geese , ducks, flamingos, herons, egrets and along the coasts various sea birds such as the pink gull, the coral gull, the Mediterranean herring gull, the greater tern and the zampenere tern.
Finally, the dromedary which is an animal of strategic importance. Mount, pack animal, producer of milk, meat and skin: essential products for the peoples of the desert.