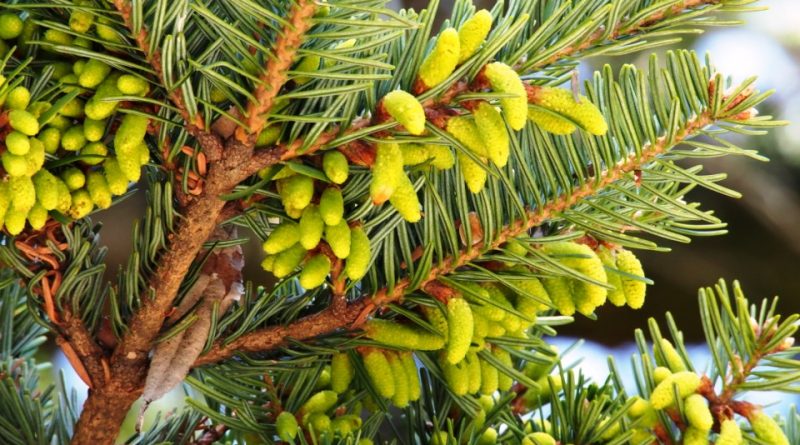 The momi fir (Abies signed Siebold & Zucc., 1842) is an arboreal species belonging to the Pinaceae family.

Etymology –
The term Abies comes from Abies which is the classical Latin name (Virgil, Egloghe, from the Sanskrit root abh gush of resin); according to another interpretation it would derive from the Greek word ἄβιος = long-lived.
The specific firma epithet comes from the Latin firmus, firm, solid, resistant, stable in reference to the rigidity of the needle-like leaves.

Geographic Distribution and Habitat –
The momi fir is a conifer endemic to Japan where it is found in hilly and mountainous environments of central and southern Japan (Honshū, Kyūshū, Shikoku and Yakushima), at altitudes between 50 and 1,900 m (more commonly between 300 and 1000 m).
Its natural habitat is that of volcanic or alluvial soils with a humid and cool climate, in the northern part of the range, warm temperate in the southern part, with annual rainfall exceeding 1,000 mm.
This species rarely forms pure woods, while it tends to be found in mixed formations with Fagus crenata, Fagus japonica, Castanea crenata, Carpinus laxifolia, Tsuga sieboldii, Pinus parviflora, Pinus densiflora, Pseudotsuga vertics japonica, Abiesparity homolepis, Cryptopusa japonica, Sciadica obolepis , Torreya nucifera and Picea jezoensis hondoensis. 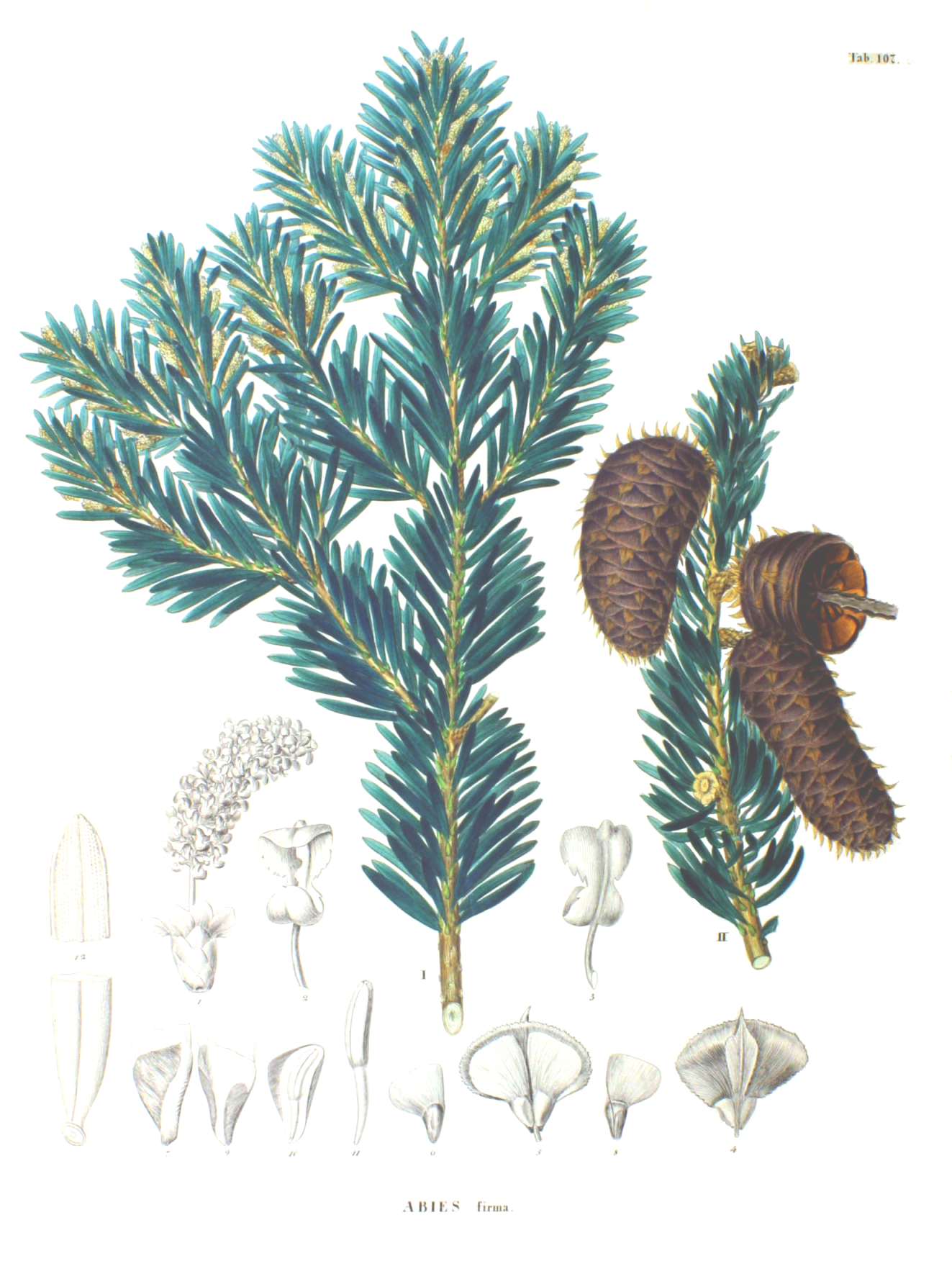 Description –
The Abies firma is a tree with a conical bearing and with the top that becomes flat in older specimens; reaches a height of 50 m.
The trunk reaches up to 2 m in diameter, with secondary branches that are yellowish-green to gray-brown in color, hairless or covered with fine black hair.
The bark is gray-brown in color; smooth on young plants with resinous cracks, it becomes wrinkled and tends to split into dark plates with age.
The leaves are 1,5-3,5 cm long, needle-like, of a bright green color on the upper side, pale yellow on the lower side; they have obtuse, marginalized or notched apex. These are arranged like a comb along the branches, the younger ones often bifid.
Male strobili are yellowish in color, cylindrical in shape, solitary and hanging, 2.5-3 cm long.
The female cones are ovoid-oblong or conical, initially green with yellowish bracts, then yellow-brown when ripe, 8-15 cm long and 3-5 cm broad, resinous with a rounded tip. They have smooth or longitudinally striated scales of 2-2.5 cm.
The seeds are light brown, 6-8 mm long, with a 10-15 mm wing, also brown.

Cultivation –
The Abies firma is an evergreen tree and an important wood plant in Japan, where it is harvested in nature and marketed but also cultivated.
In nature it grows in hilly and montane forests, where it appears as scattered trees or small groups over a large part of its range, with larger populations in the remaining part, which grow on various mountain soils of volcanic or alluvial and mesic origin; at altitudes up to 1,900 meters.
For its cultivation it should be taken into account that it is a plant of the temperate zone, which grows where the climate is humid or humid, with mild winters, north of its range, and warm temperate in the south, with annual rainfall even higher than 1,000 mm.
In a dormant state it is a fairly cold-resistant tree, but can suffer from late frosts during the first period of vegetation.
From a pedological point of view, it prefers a good moist but not waterlogged soil and grows well in heavy clay soils, with an acidic soil pH down to a minimum pH of about 5.
Plants are very shade tolerant, especially when young, although they will develop more slowly.
It is intolerant to atmospheric pollution and prefers exposures on north-facing slopes.
Trees grow quite quickly when young, generating new growth of 60cm per year from the age of around 6. The lateral shoots, however, grow with equal vigor and the tree often loses its apical predominance.
Propagation occurs by seed. Sowing should be done at the end of winter, in a protected area, or outdoors in early spring. Germination is often poor, usually taking about 6 – 8 weeks. Stratification is said to produce more uniform germination, so it is recommended that the seed be sown in an unheated seedbed as soon as it is ripe in the fall period.
The seed remains viable for up to 5 years if well preserved.
After germination the young seedlings should be planted in the open field when they are quite small, between 30 and 90 cm in height. Larger plants root poorly and are more prone to winds.

Customs and Traditions –
Abies firma is a plant that is sometimes, but not commonly, used as an ornamental tree, particularly in warm temperate regions with hot and humid summers in some countries such as the southeastern United States. It is also used as a subgraft for spruce cultivars in these areas.
In Japan it is mainly used for its wood which is light and easily workable, although it needs treatments due to its tendency to bend.
The wood is light, soft, coarse-grained, not very resistant and requires careful seasoning to avoid deformation and is used in carpentry, flooring, carpentry, and, to a large extent, in the paper industry.
The plant in Japan is widely used for reforestation, while elsewhere it is grown as an ornamental plant in vegetable gardens and botanical gardens.
It also finds an edible use as the seeds can be eaten roasted.
From an ecological point of view, Abies signs, despite a population reduction in the last 2-3 generations (with an estimate of a further loss of 5-10% in the next 100 years), due to the degradation of the parts of range more contiguous to the large urban conurbations, it is a species not yet endangered due to its very common presence in the reference range; it is therefore classified as a least concern species in the IUCN Red List (2013).

Preparation Method –
The Abies firma is a conifer that is mainly used for two uses: for its timber and as an ornamental plant.
From a food point of view, the seeds can be eaten roasted.
On the other hand, no medicinal uses are known.