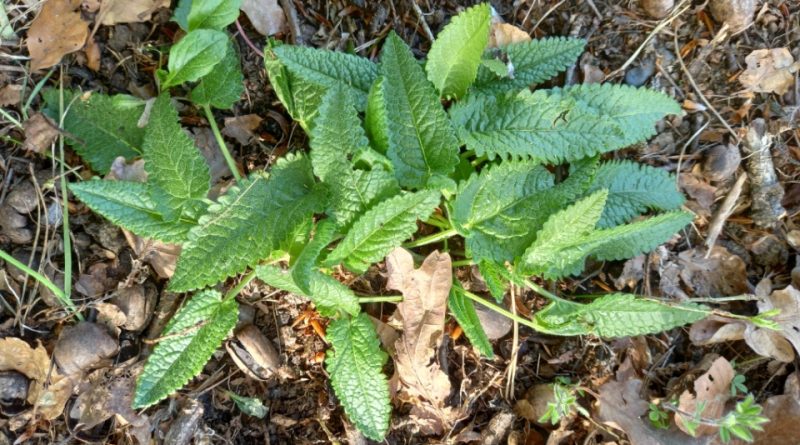 The common hedgenettle or betony, purple betony, ecc. (Betonica officinalis L.) is a herbaceous species belonging to the Lamiaceae family.

Etymology –
The term Betonica comes from vettonica / bettonica, a medicinal plant mentioned by Pliny and Pelagonius native to the Iberian region inhabited by the Vettónes.
The specific epithet officinalis comes from a medieval laboratory workshop: as a plant usable in pharmaceuticals, herbal medicine, liqueurs, perfumery and the like.

Geographic Distribution and Habitat –
Common hedgenettle is a species with a range centered on central-southern Europe. However, it is also present in Great Britain, south and east of Sweden, up to Spain, Italy, Greece and the Caucasus.
In Italy it is present in all continental regions.
Its habitat is that of arid meadows on more or less primitive limestone or even marly-arenaceous soils as long as they are rich in bases, but it also remains in the edges of woods, in open clearings and bushes, from sea level to about 1800 m. . However, it can also be found on the edge of fields and paths. 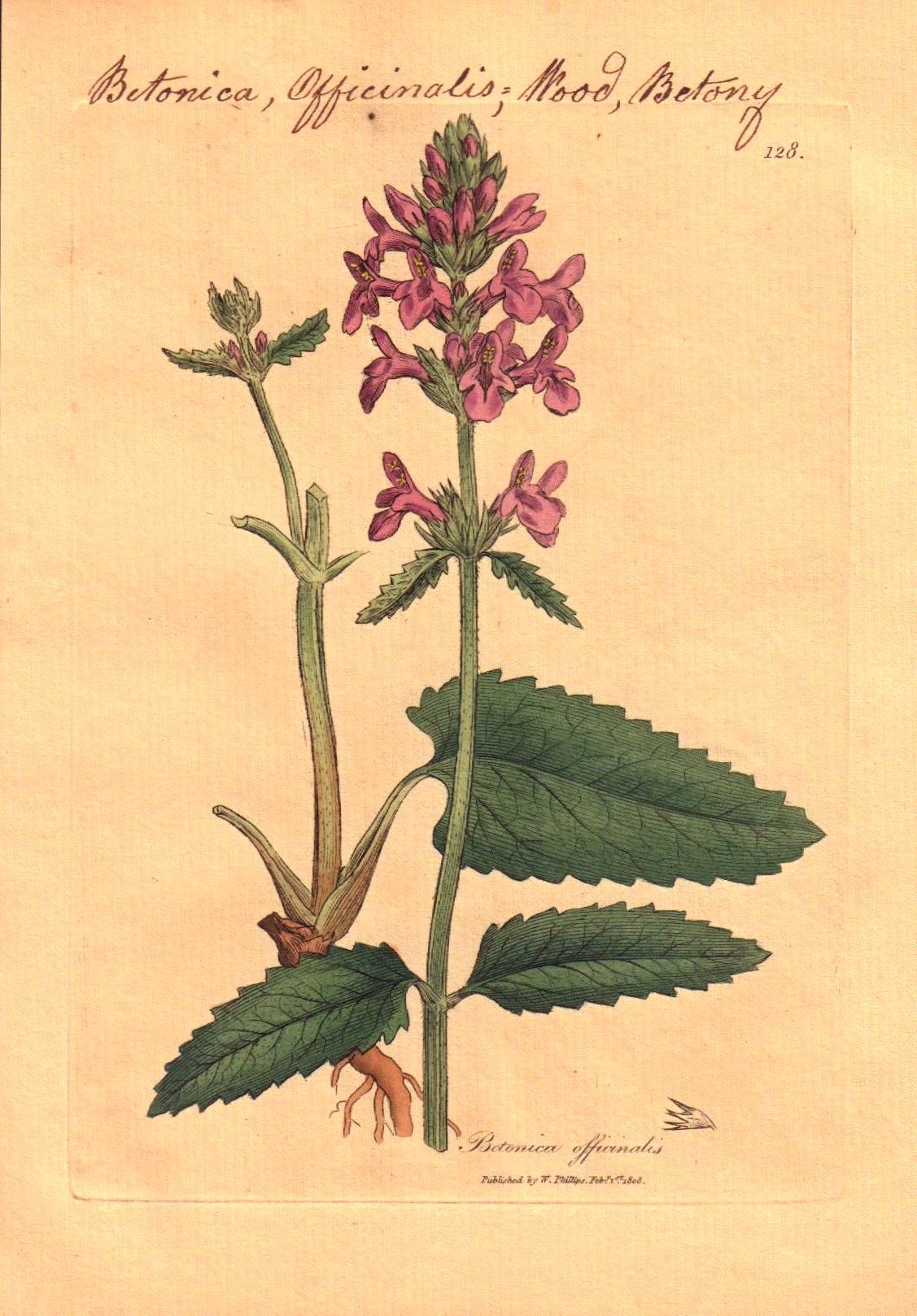 Description –
The common hedgenettle is a small but lively perennial, erect, hairy, 20-60 cm tall.
It has a root system with an oblique rhizome and secondary roots.
The epigeal stem is ascending-erect, tetragonal, sub-hairless, simple.
The basal leaves are petiolate in rosette, lanceolate lamina with a corded base; the cauline ones are opposite, sessile, with an oval lamina (5-7 cm) and a truncated base; regularly toothed margin.
The inflorescence is a terminal spike dense with contracted buds.
The flowers are composed of a basal oval-sharp brattola; gamosepalus chalice, actinomorphic (5-10 nerves); zygomorphic corolla, gamopetala, 1-1.5 cm bilabiata, lips diverging at right angles; purple color; 4 protruding stamens, semi-inferior ovary, bifid stigma.
Flowering is from June to August.
The fruit is a schizocarp (tetrachenium) formed by four nuculae.

Cultivation –
Betonica officinalis is a perennial plant that has been harvested in nature for some time for local use as a food, medicine and source of materials.
This plant, in its natural state, grows mainly in prairies, hedges, heaths and open woods.
For cultivation it prefers a slightly moist soil, in a sunny or partially shaded position.
Resistant to a minimum temperature of at least -25 ° C.
This plant was cultivated, especially in the past, for its medicinal virtues, although today it is little used.
Pollination occurs through insects (entomogamous pollination): diptera, hymenoptera and more rarely lepidoptera.
Reproduction occurs through fertilization with pollination of flowers and propagation through seeds. The seeds falling to the ground (after being carried for a few meters by the wind – anemocora dissemination) are subsequently dispersed mainly by insects such as ants (myrmecoria dissemination). For this purpose, the seeds have an oily appendage (elaisomi, substances rich in fats, proteins and sugars) which attracts ants during their movements in search of food.
However, the plant can also be propagated by dividing the tufts in the period from February to April.

Customs and Traditions –
The common names (Betonica and Vettonica) could derive (according to Pliny) from the Vettoni tribe (of Iberian origin). In the Middle Ages, and even before in Egypt, magical powers were attributed to the plant and it was used to cure any disease. The plant (given its popularity) has given rise over time to different idioms; in Veneto, for example, the phrase “Known as la betonica” is used to indicate something that is on everyone’s lips. Or the proverb “Useful as the betonic grass” to indicate something that can be used for several uses.
Betonica officinalis is a plant with delicate pink colored flowers scented with citrate, which can be confused with Stachys officinalis subsp. serotina, which is distinguished by having narrow base leaves, by the bristly stem due to reflected hairs and the pauciflora spike interrupted at the base, also prefers arid locations.
B. officinalis is a officinal species with different properties, in particular tonic and stimulating.
According to folk medicine, this plant has the following medicinal properties: astringent, digestive, anti-brain, vulnerary and sedative in general. It has a specific action in headaches. It is also healing. It is also valid for those who have problems with the elimination of uric acids.
In traditional food uses, the leaves and flowering tops were once above all a good substitute for tea, refreshing and aromatic.
In the medicinal field it was once commonly used as a medicinal plant in the treatment of a wide range of ailments, in particular as a tonic and nerve to treat diseases of the head and as an external application to wounds.
This plant also stimulates the digestive system and the liver, having an overall tonic effect on the body.
Today, however, it is less used and, often, in herbal medicine, it becomes part of herbal mixtures preparations.
It is used in the treatment of nervous stress, premenstrual disorders, poor memory and tension.
It can be taken in combination with herbs such as comfrey, Symphytum officinale and lime blossom, Tilia species, to treat sinus headaches and congestion.
Betonica officinalis can be taken alone, or with Achillea millefolium, to calm nosebleeds.
A pinch of the powdered herb tends to cause violent sneezing and has been used as part of a snuff blend to treat headaches.
A homeopathic remedy is obtained from the freshly picked plant.
It is used in the treatment of asthma and excessive sweating.
Among other uses, it should be remembered that a yellow dye is obtained from the leaves.
It is also a melliferous plant and honey can be obtained when it is foraged by bees, but since its diffusion is not very abundant, production is scarce and occurs only in some areas.
The substances present in this plant are: tannin, stachhydrin, choline, betaine, betonicin; it also contains flavonoids, iridoids: harpagides, tannins, saponins, etc.

Preparation Method –
Betonica officinalis is a plant that has found in the past a wide diffusion and used both in the food and medicinal fields.
Of this species, both the leaves, the tops or the entire plant are used.
The whole plant is harvested during flowering in the summer and can be dried for later use.
In addition to being used as an infusion in the medicinal field, fluid extracts are also obtained.
The rhizome should not be used in cooking as it can easily cause vomiting and diarrhea. The leaves are sometimes used to flavor tobacco, but also to make drinks and tea.