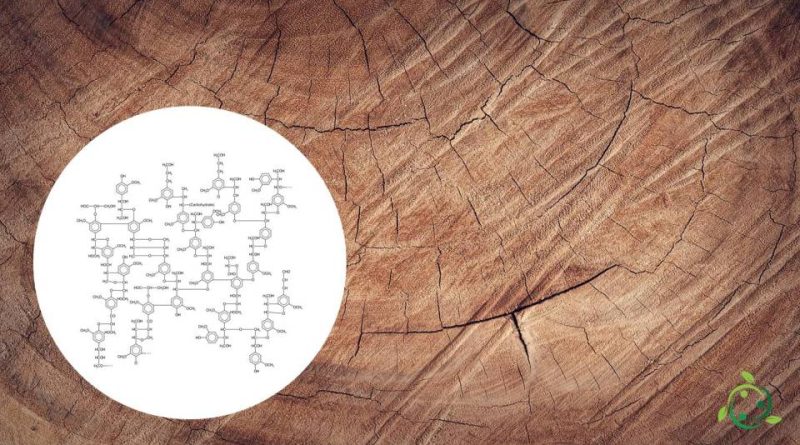 Lignin is a complex chemical substance, which makes up 20% -30% of wood and certain other plant tissues.
The term lignin comes from the Latin lignum, “wood”, for this reason the plant species that contain a large amount of lignin are called woody plants.
Lignin impregnates and constitutes the walls of many cells of pteridophytes, spermatophytes and also, albeit to a limited extent, bryophytes.
The main feature of lignin is that of having a high molecular weight, resulting from the union of different phenylpropyl acids and alcohols (coumaryl, coniferil and synapyl). The random coupling of these radicals gives rise to a three-dimensional, amorphous polymeric structure.

Molecular structure –
Lignins are therefore polymers made up of three different types of monomers:
– p-coumaryl alcohol;
– coniferil alcohol (4-hydroxy-3-methoxycinnamyl alcohol);
– synapyl alcohol (4-hydroxy-3,5-dimethoxycinnamyl alcohol).
The component of each monomer varies significantly as a function of:
– the plant family (angiosperms, gymnosperms, etc.);
– the plant species;
– the organ where it resides;
– the biological tissue.
Lignins are the second most synthesized biopolymers on Earth after cellulose. The biomass formed by cellulose and lignins represents about 70% of the total biomass.
Lignin, like cellulose and hemicelluloses, is a polymer whose molecule, very complex and with a three-dimensional structure, is made up of a single unit, phenylpropane, repeated many times.
Lignin performs the function of binding and cementing the fibers together in all plants to give and enhance the compactness and strength of the plant. It is also known as an encrusting material, as it coats the fibers. Therefore, the processes of extracting cellulose from a vegetable require an attack of the lignin to break up the molecule and remove the fragments by dissolution.

Lignin biosynthesis –
The biosynthesis that leads to the formation of lignin in plants originates from the amino acid phenylalanine; this is transformed into cinnamic acid by means of the enzyme phenylalanine ammonia lyase.
Furthermore, a series of hydroxylations, methylations and finally reductions, all enzymatically catalyzed, lead to the three precursor monomers: p-coumaryl alcohol, coniferil alcohol, and synapyl alcohol. The random radical copolymerization of the three precursors, catalyzed by the enzyme peroxidase, leads to the formation of a polymer with a disordered structure, three-dimensional, branched, insoluble in water and in the most common solvents: lignin. Lignin polymers are complex structures with a molecular weight of approximately 10,000 µm.
From a chemical point of view, lignin therefore belongs to the class of so-called phenylpropanoid compounds, that is, it has no carbohydrate character, but belongs to the class of aromatic compounds.
However, the composition of the lignin varies according to the plants in which the biosynthesis takes place. Thus in the composition of the lignin of herbaceous plants, mainly of grasses, coumaryl alcohol prevails among the precursors. Coniferil alcohol, on the other hand, is the most abundant precursor of the lignin of conifers, and finally the lignin of woody (broad-leaved) angiosperms derives mainly from synapyl alcohol.

Role of lignin –
Lignin constitutes, immediately after polysaccharides, the most abundant organic polymer in the plant world.
This polymer performs many functions essential to life in plants.
For example, it has a very important function in the internal transport of water, nutrients and metabolites. It provides stiffness to the cell walls and allows the connection between the different cells of the wood, creating a material that is very resistant to shocks, compressions and bending. Lignified tissues resist very well to attacks by microorganisms, not allowing the penetration of destructive enzymes into the cell wall.
The lignin is deposited in the secondary wall of the plant cells and being very resistant to compression, it is able to give a lot of solidity. Lignin also has the power to waterproof cells, since it is itself hydrophobic. The cells of the tissues that serve as support for the plant (sclerenchyma) or have the function of carrying water and mineral salts (xylem) have the walls impregnated with lignin (lignified).
It also allows the growth of woody plants in height. This ability made it possible to have an upright position which favored the reception of light energy. All these acquisitions were a prerequisite for the development of plants in the terrestrial environment. The ability of plants to form lignins began in the early Paleozoic and characterized tracheophytes.