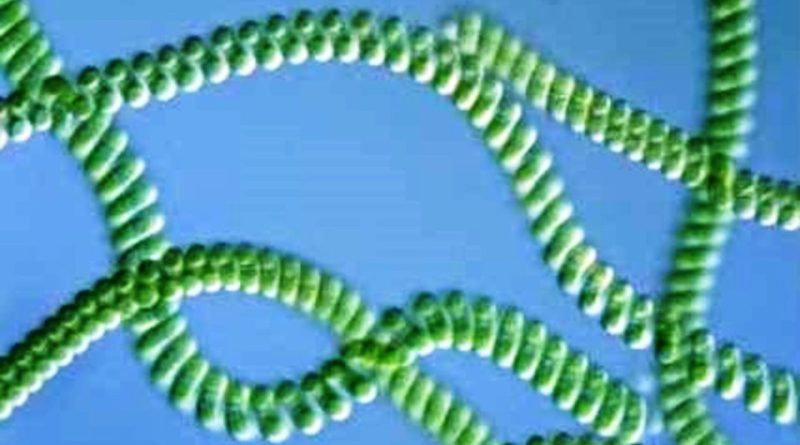 Etymology –
The term Arthrospira was given in 1852 by Stizenberger based on the presence of the septa, its helical shape and its multicellular structure.
The specific epithet platensis derives from the name of the geographical region corresponding to the Río de la Plata basin, the great estuary of South America, where the Paraná and Uruguay rivers flow.

Geographic Distribution and Habitat –
Arthrospira platensis is a cyan bacterium that grows in colonies in nature in Africa, Asia and South America.
Its habitat is that of tropical and subtropical lakes (such as Lake Texcoco, Lake Chad, Lake Chenghai, China) with high water pH and high concentrations of carbonate and bicarbonate. 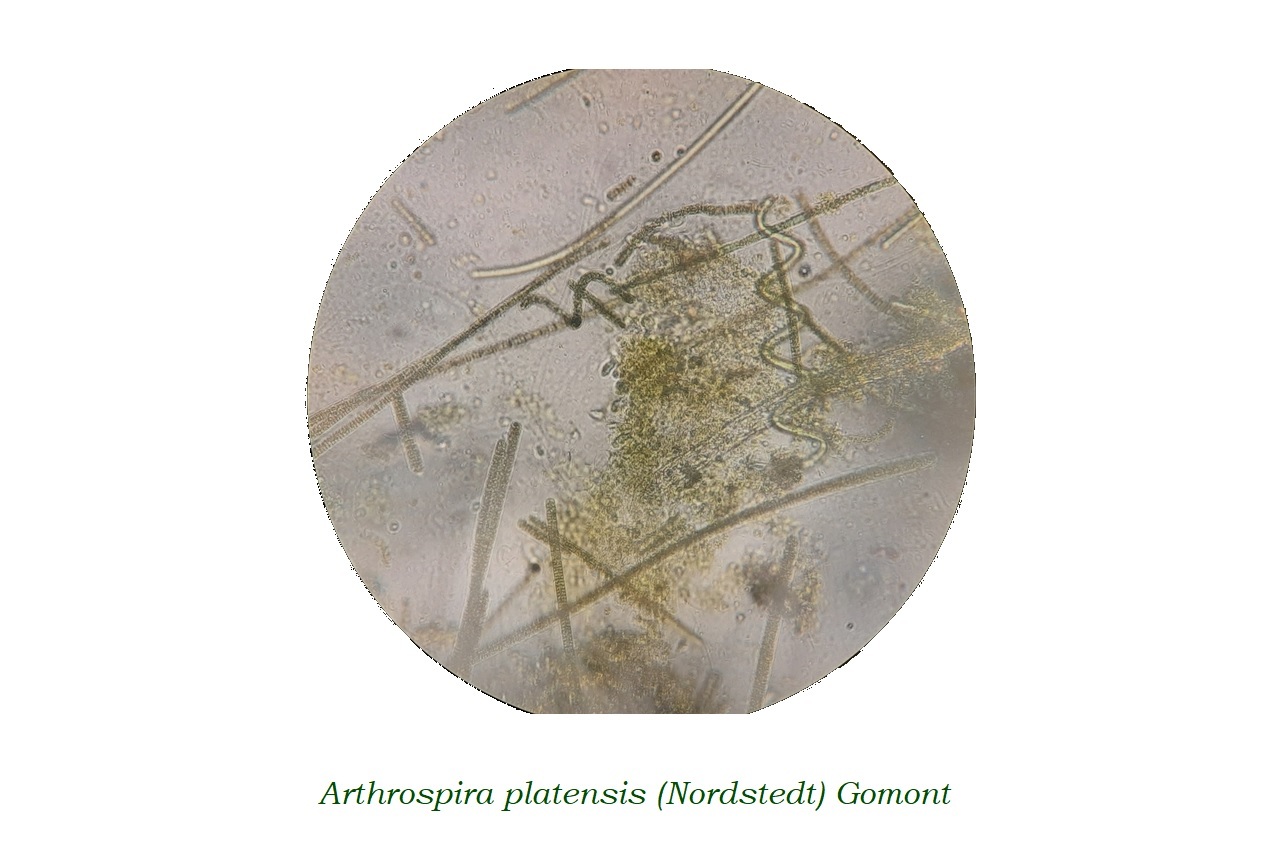 Description –
Arthrospira platensis is a filamentous cyanobacterium, characterized by spiral-shaped multicellular cylindrical trichomes. It is gram-negative, photoautotrophic non-nitrogen fixing.
Motility has been described as vigorous glide with no visible flagella.
Genetically it has a single circular chromosome containing 6.8 Mb and 6,631 genes. The G + C content was determined to be 44.3%.

Cultivation –
Spirulina is grown in open ponds or in special machines called photobioreactors, with fresh water suitably artificially stirred to ensure oxygenation and distribution of nutrients. The largest commercial producers of spirulina are in the United States, Cuba, Thailand, India, Taiwan, China, Bangladesh, Pakistan, Burma, Greece, Italy, France, Chile and Australia.
In nature, however, it lives in salty, warm and alkaline pH lakes of tropical and subtropical regions.

Customs and Traditions –
Arthrospira platensis is a cyan bacterium and one of the first forms of photosynthesizing life that originated more than three and a half billion years ago.
Spirulina was a primary food source for the Aztecs and other peoples of Central America until the 16th century; the harvest from Lake Texcoco and the subsequent sale was described by one of Cortès’ soldiers. The Aztecs called it tecuitlatl.
It was found in abundance in Lake Texcoco by French researchers in the 1960s, but there is no evidence of its daily use by the Aztecs after the 16th century, probably due to the drying up of the surrounding lakes for agricultural and urban development. The first large-scale spirulina production facility, operated by Sosa Texcoco, was established there in the early 1970s.
Spirulina has traditionally also been harvested in Chad, where it is taken from small lakes and ponds. It is dried in cakes called “dihé”, which are used to make broths for meals and also sold in the markets.
In Mexico they already knew many centuries ago the great value and the curative effect of spirulina: in fact, they used this source of energy every day to supplement their diet.
Like all natural products that gave strength, vigor and health, it was considered the “food of the gods” as it provided energy quickly and increased stamina.
Foreign dominations put an end to the evolved Aztec and Maya culture and so spirulina was also forgotten for some centuries.
Only forty years ago, thanks to numerous European and American botanists and researchers, spirulina was rediscovered and has been grown in special facilities ever since.
Today Arthrospira is known all over the world by millions of people who use it daily to increase their energy and improve their well-being.
The two main qualities of spirulina are the very high assimilation of the product by our body (75% against an average of 20% of other supplements) and its great nutritional intake.
Spirulina is particularly rich in proteins, essential amino acids and lipids. The fats contained in it belong to the large family of mono and polyunsaturates and are considered positive nutrients, able to normalize cholesterol levels in the blood, participate in the formation of myelin sheaths that line the nerves and improve the functionality of the immune system.
The biotin and ferridoxin content, which inhibits the formation of lactic acid during particularly intense muscular effort, makes it a particularly useful supplement for athletes, as well as of course the excellent vitamin intake and its remarkable antioxidant properties, which are useful for counteracting the production of free radicals.
The high content of carotenoids, ascorbic acid and tocopherol, known and documenting antioxidants, allow these “food” to protect the body from damage caused by free radicals (premature aging, neurodegenerative diseases, some cancers and atherosclerosis).
The lack of iodine allows its use even in subjects with hypo and / or hyper thyroidism problems.
The high content of amino acids makes it a particularly useful food for covering the needs of essential amino acids in people who follow a vegetarian diet.
Furthermore, the cell walls of spirulina do not contain cellulose as they are composed of soft mucopolysaccharides, which makes it easily assimilated and digested.
The active ingredients are.
– 65% Proteins (8 essential amino acids);
– 18% Carbohydrates (including rhamnose which promotes glucose metabolism); fiber;
– 7% Minerals (Calcium, Magnesium, Iron, Potassium, Zinc, Copper, Manganese, Chromium, Selenium);
– 5% Vitamins naturally rich in beta-carotene, vitamins (complex B, D, E, K);
– 5% Lipids – including Omega6 essential fatty acids;
– Mineral salts (Ca, K, P, Na, Mg, S, Cl, Fe, Zn, Mn, Cu, Co, Ni, Mo, Cr);
– Pigments such as chlorophylls, phycocyanins, carotenes and xanthophylls (myxoxanthophyll, zeaxanthin, cryptoxanthin, echinenone).
Arthrospira platensis is used in the following cases:
– Fatigue;
– Sport activity;
– Premature aging;
– Unbalanced diet;
– Psychophysical stress;
– As an immunostimulant
Spirulina is considered by the European Food Safety Authority (EFSA) as a food ingredient and can be included as a food supplement in food products or used alone for use in cooking or cosmetics.
As for the contraindications and risks in its use, spirulina is a cyanobacterium, some other species of cyanobacteria are known to produce toxins such as microcystins, BMAA and more.
Microcystins and other toxic substances are not produced by spirulina, but can be present by contamination. Some spirulina supplements have been found to be contaminated with microcystins, although sometimes at levels below those considered risky.
Microcystins can cause gastrointestinal upset and long-term liver cancer. For this reason, the possibility of even minimal exposure to pollution by microcystins or other toxins is a cause for concern.
Heavy metal contamination has raised concerns in China. Lots of spirulina-based food supplements made in China have been found to be contaminated with heavy metals, such as lead, arsenic and mercury.
The worldwide trend is to consider spirulina products as a food supplement and not as a drug. This approach, considering the fact that the cyanobacterium is in extension as an artificial cultivation (in the tank), makes it necessary to carefully check the conditions of the substrate and its possible pollutants.
Furthermore, due to the very high presence of vitamin K, patients undergoing anticoagulant treatments should consult their doctor and adjust their spirulina intake accordingly.
Just like all protein-rich foods, spirulina contains the essential amino acid phenylalanine (2.6-4.1g / 100g) which should be avoided by people with phenylketonuria, a rare genetic disorder that prevents the body from metabolizing phenylalanine.
However, some research is underway to better determine its characteristics both in terms of potential and risks.
Furthermore, in the late 1980s and early 1990s, both NASA (CELSS) and the European Space Agency (MELISSA) proposed spirulina as one of the primary foods to grow during long-duration space missions.

Preparation Method –
Arthrospira platensis is available in tablets, in micro-noodles and in powder form but you must make sure that it is a certified product, grown in controlled waters and processed without the addition of additives.
Unlike sea algae, spirulina does not contain iodine (therefore it does not alter thyroid function), but provides a lot of chlorophyll, a molecule with a similar composition to that of the blood, which treats anemia, oxygenates brain tissues and strengthens muscle mass.
Arthrospira platensis is especially suitable for those who do not eat meat.
Spirulina can be added to vegetable milks, smoothies and centrifuged (one crumbled tablet or one teaspoon of powder per glass), which are enriched with calcium, selenium and antioxidants. Perfect, for example, with pomegranate juice, to prepare nutritious and protein green gnocchi.
The powder mixes with potatoes and flour.
Perfect sprinkled on vegetable and cereal salads, just before serving.