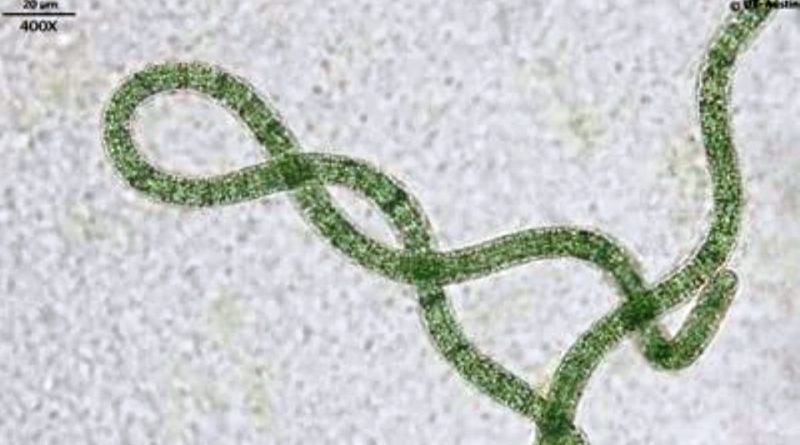 Etymology –
The term Arthrospira was given in 1852 by Stizenberger based on the presence of the septa, its helical shape and its multicellular structure.
The specific epithet maxima is the superlative of magnus grande: maximum, the largest, in terms of size compared to those of the congenital species.

Geographic Distribution and Habitat –
Arthrospira maxima is a cyanobacterium native to Asia, Africa and Central-South America.
Its habitat is that of extremely salty and warm lake waters. 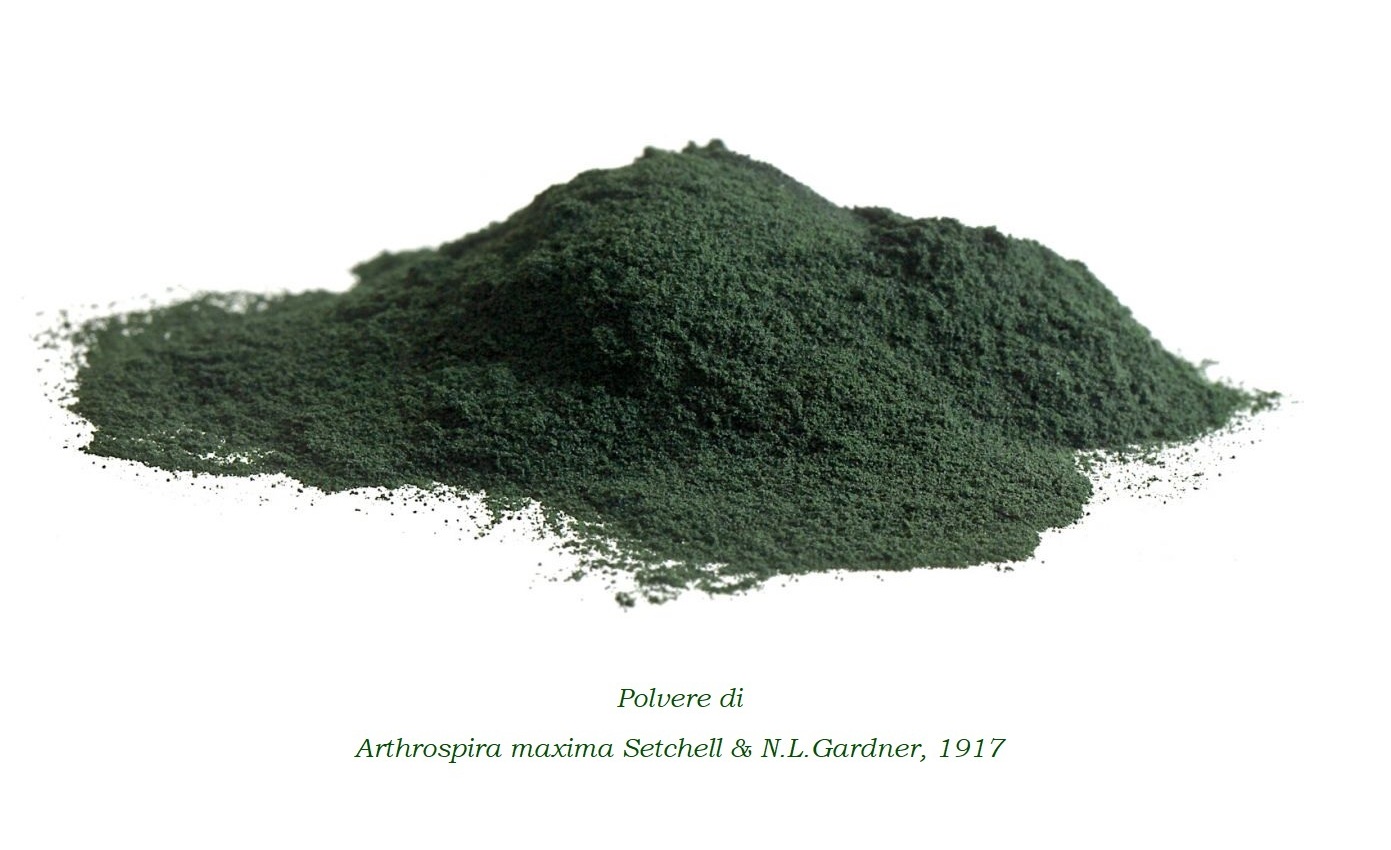 Description –
Arthrospira maxima is a cyanobacterium, green-blue in color, characterized by a typical spiral shape, visible only under the microscope, which gives it its name.
It has a narrow and elongated shape and owes its color to the high presence of chlorophyll and its name to the characteristic spiral shape of the filaments, which do not exceed 1 mm in length.

Cultivation –
Spirulina is a cyanobacterium, that is, a single-celled prokaryotic photoautotrophic organism, which uses the reactions of photosynthesis to synthesize the molecules necessary for its nourishment, without the need to introduce them from the outside.
The colonies of this organism have been collected and consumed for centuries for food and therapeutic purposes.
It is grown in artificial ponds in Africa, California, Hawaii, Thailand, China, Taiwan and India.

Customs and Traditions –
Arthrospira maxima has been known for a very long time.
The oldest evidence on the use of Spirulina dates back to 6000 years BC, in the coastal regions of the Far East. Even today in China there is a wide use of cyanobacteria in the food sector and here are the major world exporters (it is estimated that total trade reaches 500 tons per year).
The Spanish conquistadors reported evidence of how Mexican peoples collected algae from brackish lake waters to use them as a food source.
Even today, the African tribes living around Lake Chad collect these cyanobacteria and dry them to prepare a kind of cake called dihe – which constitutes a significant portion of the daily meal and represents an important economic resource for local populations.
This cyano bacterium is mainly composed of proteins, providing all the essential amino acids: Omega 3, Omega 6, Omega 9, beta-carotene, vitamins. It also contains important minerals such as Iron, Calcium, Magnesium, Phosphorus, Potassium, Manganese, Selenium and Zinc.
Arthrospira maxima is well known for having multiple nutritional properties and for bringing various benefits to our body including:
– Low calorie content, rich in mineral salts and proteins, it is also able to induce a sense of satiety;
– Antioxidant and protective action against free radicals thanks to the presence of chlorophyll, ascorbic acid and tocopherol;
– Stimulating action of the immune system, thanks to essential amino acids;
– Energizing action, used by athletes to improve their performance thanks to the ferridoxin and biotin content.
– Action against the cardiovascular system. Thanks to the presence of Omega 3 and 6 it lowers bad cholesterol levels.
It is also used in the food sector, as a supplement and in beauty care products.
There are also uses in the cosmetic field where it is well known and used more often in anti-aging creams, but thanks to its content of copper, iron and B vitamins it also brings particular benefits when used in hair care products.
For about thirty years, the use of blue-green algae has also spread to the West, by virtue of its well-known nutritional properties.
In recent years, precisely due to the proliferation of testimonies favorable to the consumption of blue-green algae, scientific studies on their use have intensified, to verify their alleged benefits in nutritional and therapeutic terms. Studies are still limited and often lacking in terms of scientific rigor (often these are experiments on a small number of subjects and without comparison with placebo), but there are some interesting results.
In summary these studies demonstrated the following potential in the following areas:
– Anti-inflammatory;
– Antioxidant;
– immunostimulating and immunomodulating;
– lipid-lowering (reduction of total cholesterol, ldl, vldl and triglycerides, increase in hdl cholesterol);
– hypoglycemic (through increased sensitivity to insulin);
– adjuvant in the prevention of heart disease (by effect on the control of cholesterol and blood pressure);
– adjuvant in the treatment of metabolic syndrome;
– adjuvant in the treatment of iron deficiency anemia;
– dietary support in conditions of malnutrition.
Among other potential uses, much attention was paid to the potential effect of Spirulina against allergies: in a double-blind study conducted against placebo in patients with allergic rhinitis, Spirulina was administered at a dose of 1 or 2g / day for 12 weeks. At the end of the test, at the highest dosage, a significant reduction was observed in the levels of Interleukin-4 (by 32%) – a protein that regulates immune responses mediated by Immunoglobulin E (IgE), involved in allergic manifestations.
As for contraindications, as reported by the FDA (the American government body that deals with the regulation of foods, drugs and supplements), it is generally considered safe.
Several cyanobacteria produce toxins (Microcystine, BMAA) dangerous for human health, but there are no reports of toxicity related to Spirulina – probably also due to the fact that the one on the market derives from large-scale crops, subjected to rigorous controls by the health authorities.
Furthermore, there are no known interactions with drugs.

Preparation Method –
Arthrospira maxima can generally be found on the market in the form of tablets or capsules, alone or in combination with other plant derivatives as a food supplement.
Normally the recommended dosage is 500 mg-1 g / day, possibly increased up to 4 g in the absence of contraindications or individual intolerances. In any case, it is recommended not to exceed the dose of 10 g / day.