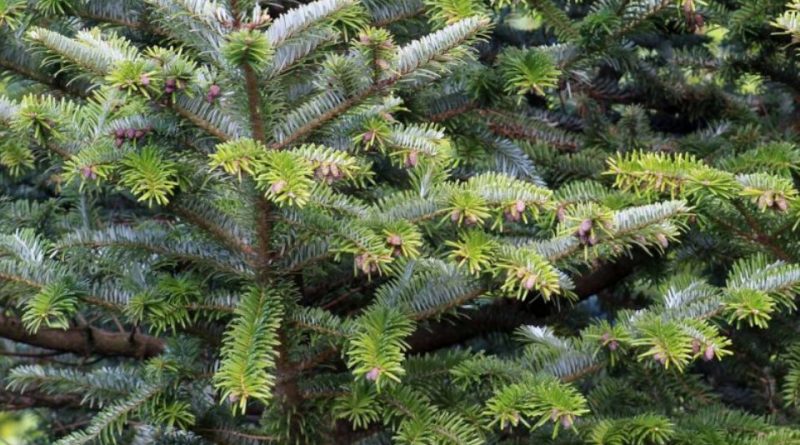 Etymology –
The term Abies comes from Abies which is the classical Latin name (Virgil, Egloghe, from the Sanskrit root abh gush of resin); according to another interpretation it would derive from the Greek word ἄβιος = long-lived.
The specific epithet fanjingshanensis refers to the Fanjing Mountains, a mountainous location where its range is located.

Geographic Distribution and Habitat –
Abies fanjingshanensis is a conifer of Asian origin, endemic to the north-east of the Chinese province of Guizhou. It is a rare species with a limited range (less than 20 km²) in the Fanjing Mountains in the north-east of the Chinese province of Guizhou.
Its habitat is that of an area at 2,100-2,300 m of altitude, with a humid and cold climate of the mountain altitudes, with a short summer season, where it is found in mixed woods characterized by the presence of Tsuga chinensis, Acer flabellatum, Rhododendron hypoglaucum, Enkiartnus chinensis and Prunus serrulata. 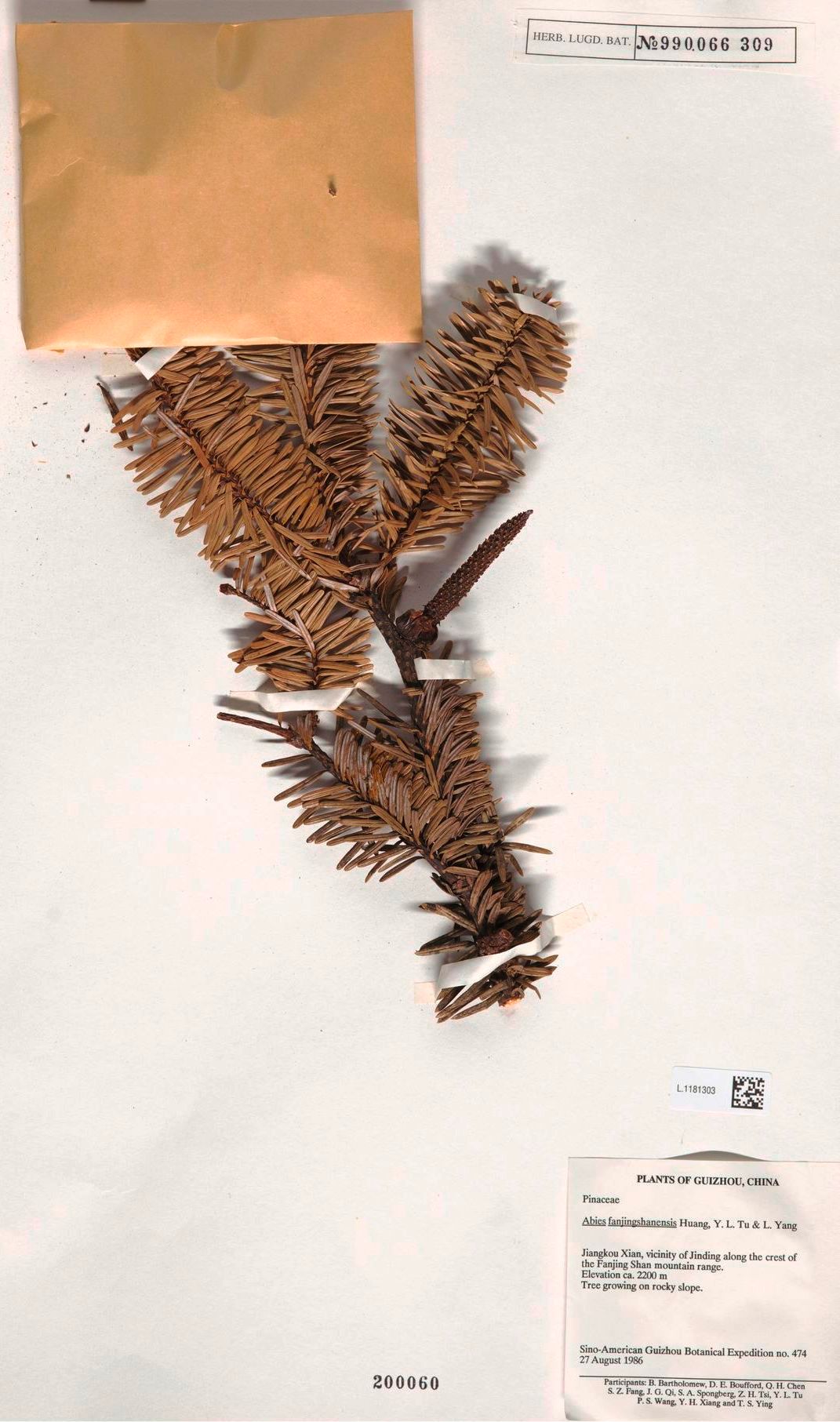 Description –
Abies fanjingshanensis is a medium-sized evergreen conifer that can reach 20 m in height with a trunk with a maximum diameter of 65 cm.
It has a bark that in young fir trees is gray and smooth, then becoming darker and greyish-brown, furrowed and grooved in the lower part of the trunk as the years go by.
The young twigs are initially red-brown in color, then darken after the third year of age.
It has needle-like leaves, up to 4.3 cm in length, spirally arranged on the upper part of the main branches, arranged like a comb in two lateral rows in the lower part, and in the secondary twigs.
The vegetative buds are rounded, ovoid, 5 mm long and resinous; the pearls are reddish-brown, triangular ovate.
The flowers are oblong male strobili, axillary, 1-1.5 cm long, yellow in color with red microsporophylls.
The female cones are cylindrical, 5-6 cm long and 4 cm broad, of a purplish brown color, dark brown when ripe, with reniform scales covered with dense down in the exposed parts.
The seeds are ovoid, measuring 8 mm in length, with a cuneate wing of 7 mm.

Cultivation –
Abies fanjingshanensis is a species that grows in a small area of ​​China, in the region of Guizhou, Jiangkou Xian, on the northern slopes of Fanjing Shan (Wuling Shan). This location is at least 500km south of the closest occurrence of Abies fargesii in the northwestern part of Hubei.
Vegeta between 2100 and 2300 m of altitude as a minor component of the mixed forest of conifers and broad-leaved trees with Tsuga chinensis, Acer flabellatum, Rhododendron hypoglaucum, Enkiartnus chinensis and Prunus serrulata and other species.
In 1998, the entire population was estimated to be very small, but due to the remote location no immediate threats were perceived.
In 2013, the assessment was revised to that of a declining population, mainly due to the impacts of acid rain.

Customs and Traditions –
Abies fanjingshanensis is a conifer closely related to A. fargesii, although the populations are separated by 500 km at their closest point.
Among other things, it is a taxon similar to A. fargesii and its rank is discussed by some authors who classify it as a subspecies of A. fargesii, however its separate population from A. fargesii has it described as a species by other authors.
In any case, Abies fanjingshanensis is a species threatened with extinction in nature (only 2,500 mature specimens, out of an estimated population of about 17,000), an attempt is underway to reintroduce it with young specimens grown in botanical gardens. However, the causes that caused the real risk of extinction remain unchanged, first of all the acid rain caused by the pollution of the area. Therefore, it is included in the IUCN Red List as an endangered species.

Preparation Method –
The Abies fanjingshanensis is a fir which, due to its limited diffusion and the small number of plants, cannot have any use whatsoever except that of a program of safeguarding and protecting both the plants and the habitat where they grow.