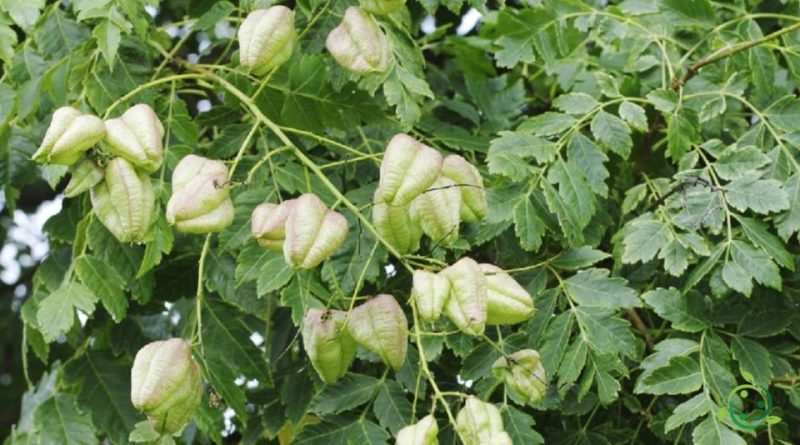 The koelreuteria or goldenrain tree, pride of India, China tree, varnish tree (Koelreuteria paniculata Laxm.) Is a plant of the Sapindaceae family, native to China and Korea.

Suitable breeding habitat –
Koelreuteria paniculata is a plant native to East Asia, in an area between China (Anhui, Gansu, Hebei, Henan, Liaoning, Shaanxi, Shandong, Sichuan, Yunnan), Japan and Korea, which subsequently, in 1747, was introduced in Europe for ornamental purposes.
In 1763 it was also introduced in America and, over time, it became a plant with a landscaping function used all over the world.
Its habitat of origin is that of lowlands and secondary forests on poor soils in China and above sea level in Japan.

Propagation –
The goldenrain tree is a plant grown mainly in southern Europe and in temperate regions around the world as an ornamental plant, due to the aesthetic appeal of its flowers, leaves and pods. Several cultivars have been selected for garden planting, including “Fastigiata” with a narrow crown and “September Gold”, which blooms in late summer.
This tree is resistant up to about -10 ° C when it is dormant but it also resists colder temperatures in some soil and climatic conditions; however it can be subject to spring frosts.
It can be grown in clayey soils, in dry soils and prefers a sunny and sheltered position.
It is a wind resistant plant, but it does not tolerate saltiness and is instead tolerant of atmospheric pollution.
It is a fast growing plant that can be propagated by seed. The seed requires a period of cold stratification. It is recommended to sow as soon as the seed is ripe in a cold environment. It is also advisable to immerse the seeds stored for 24 hours in warm water. Wait for the seed to swell and, therefore, to soak, and, if necessary, scarify it before sowing. Germination is generally good.
The young seedlings are then grown in individual pots where they will be developed for the first winter in a sheltered position.
The planting will then be carried out in late spring or early summer, after the last foreseen frosts.
It can also be propagated by cuttings; 4 cm root segments taken in December are recommended. These should be planted horizontally in individual pots in a heated greenhouse.

Ecology –
Koelreuteria paniculata is a medium-sized tree that adapts to any type of soil. The resistance to air pollution makes these trees very suitable for city parks.
It has an erect trunk, often multiple, and develops a dense dark green crown, which expands horizontally, disordered in young specimens, rounded in adult trees.
It has a deep root system, consisting of few and large roots.
The plant is widely cultivated in southern Europe as an ornamental species; it is found in parks and gardens in areas with a relatively mild climate. Its interest is given by the beautiful foliage, the yellow flowering and the curious fruits that remain on the plant for a long time.