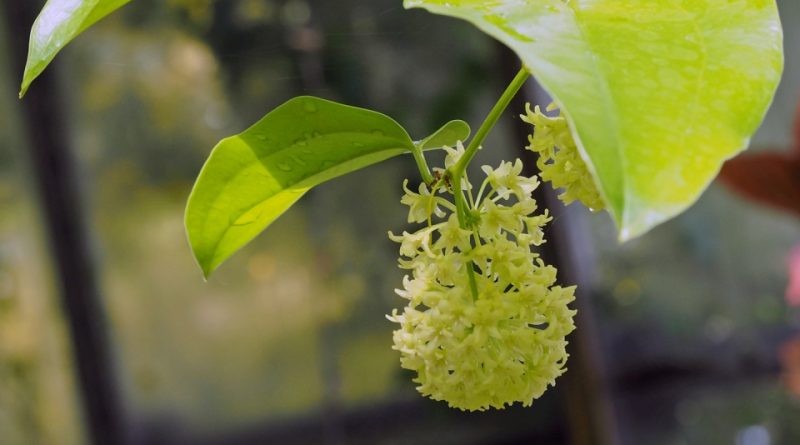 Etymology –
The term Smilax comes from the Greek σμιλαξ, smilax, the name used by the ancient authors to designate very different plants. In the Latin writers Pliny and Ovid the name was used for various thorny climbing plants.
The specific adorned epithet comes from adorning, adorning, embellishing: adorned, adorned, good-looking.

Geographic Distribution and Habitat –
Smilax ornata is a climbing plant native to Mexico and Central America.
Its distribution range is almost exclusively limited to the area of ​​central-southern Mexico, Honduras, Jamaica, Guatemala, El Salvador, Costa Rica, and scarce presences in other neighboring countries.
Its natural habitat is that of lowland forests, where it uses trees to climb and develop. 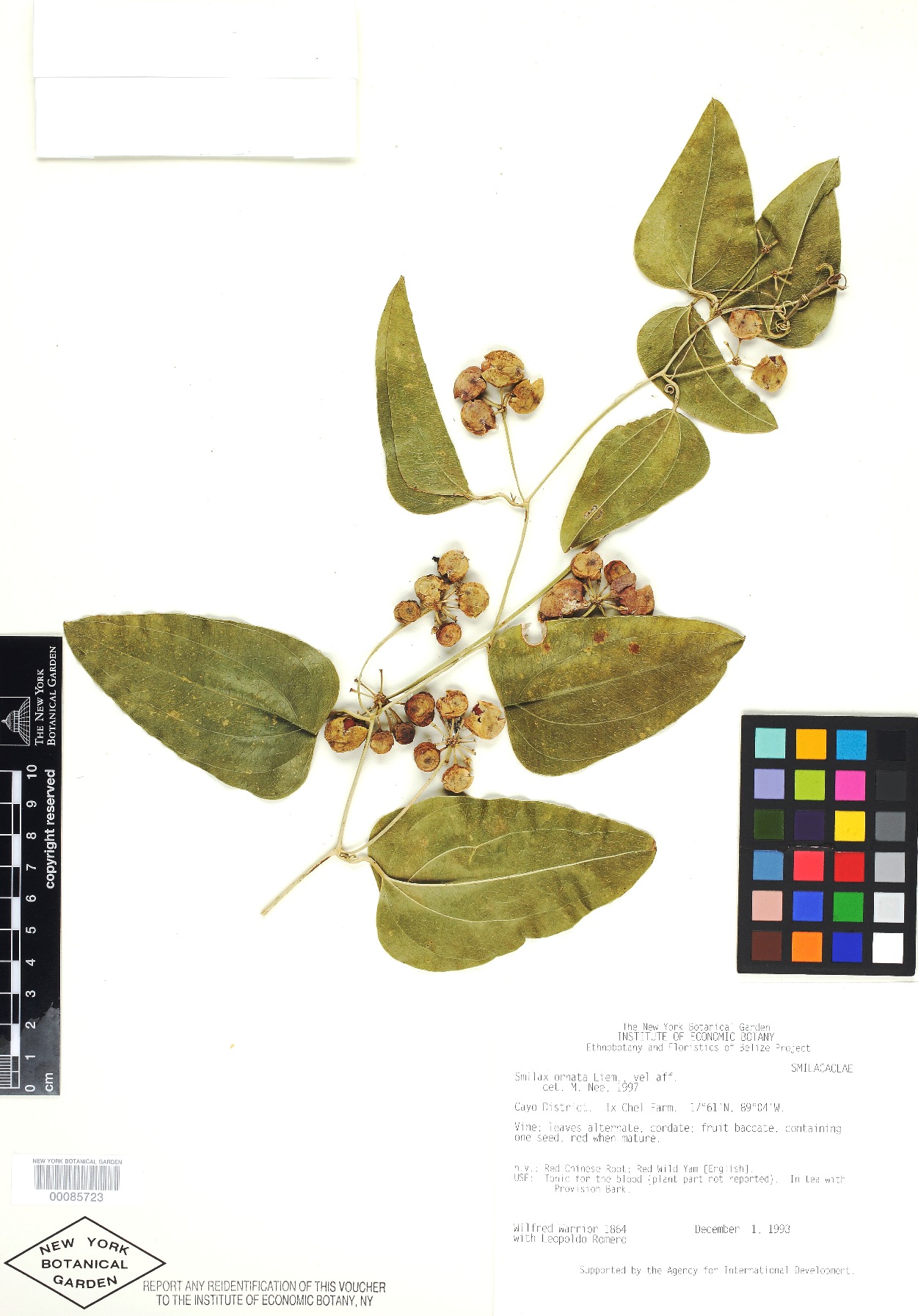 Description –
Smilax ornata is a perennial climbing shrub plant with thorny stems.
It grows on trees and other plants up to 10m tall and beyond and its hooked spines allow it to climb their branches.
The leaves are heart-shaped and not very intense green.
The flowers are small, whitish-green in color, grouped in clusters and bloom in the period from May to June.
If there is pollination, the plant produces ovoid red berries with a diameter of 5-10 mm which ripen in autumn.
The berry is rubbery in texture and has a large spherical seed in the center. The fruit remains intact during the winter, when birds and other animals feed on it to survive. The seeds pass intact in the faeces of animals.

Cultivation –
Smilax ornata is a plant that grows mainly in the spontaneous state but that can be grown in well-drained soils, both in a sunny position and in partial shade. It requires a minimum temperature of 12 ° C to be able to grow and it propagates by seed, suckers or division in spring or by semi-ripe cuttings in summer.
The roots and rhizomes of the crop are raised by severing the larger roots near the crown, allowing the smaller roots to grow.

Customs and Traditions –
Smilax ornata is a plant, like other similar species, used for some time by local populations for food and medicinal purposes.
It was used as a base for a soft drink called sarsaparilla. It is also a primary ingredient in old-fashioned root beer, along with sassafras, which was more widely available prior to studies into its potential health risks.
Smilax ornata was considered by Native Americans to be a plant with medicinal properties and subsequently became a popular European treatment for syphilis when it was introduced to the Old Continent.
From 1820 to 1910 it was registered in the United States Pharmacopoeia as a treatment for syphilis.
Today, this plant is still used in folk medicine for the treatment of rheumatoid arthritis and rheumatic pain.
Scientific evidence of this use has recently been validated by some studies.
In fact, the methanol extracts (200 and 400 mg / kg) and the ethyl acetate extract (400 mg / kg) showed a significant anti-inflammatory activity for which there is a scientific justification that the extracts of Smilax ornata possess significant anti-inflammatory activities. and analgesics.
Ultimately this plant has analgesic and anti-inflammatory activity.

Preparation Method –
Smilax ornata is a plant of popular medical tradition and also used in the food field.
Its roots are used in the medical field.
These are dried to be used in decoctions, elixirs, liquid extracts and powders.

Warning: Pharmaceutical applications and alimurgical uses are indicated for informational purposes only, they do not represent in any way a medical prescription; therefore no responsibility is taken for their use for curative, aesthetic or food purposes.
Photo source:
– http://sweetgum.nybg.org/images3/251/389/v-053.5-00085723.jpg
– https://repo.rbge.org.uk/image_server.php?kind=1500&path_base64=L2l0ZW1faW1hZ2VzL2FjY2Vzc2lvbnMvMTkvNjkvNzcvNTAvUGhvdG9fNTVlMDUxNzU0Y2U3MC5qcGc=