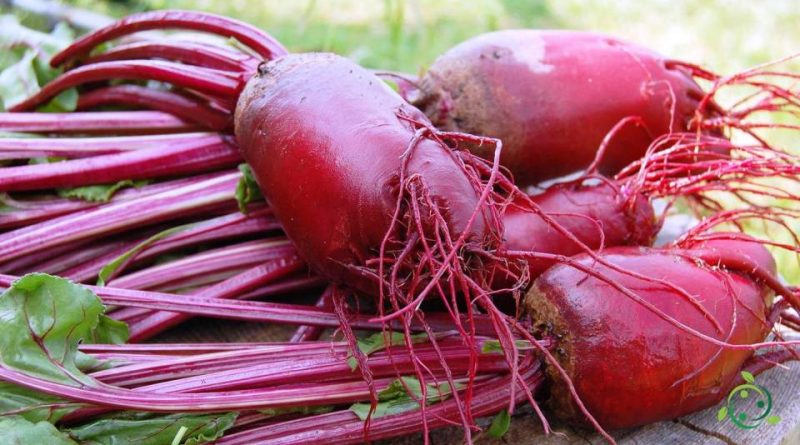 Beetroot (Beta vulgaris L.) is a plant of the Amaranthaceae family of which there are different types: sugar, vegetable, fodder intended for livestock feed.

Features –
Beetroot is a biennial herbaceous plant in cultivation, rarely perennial, with taproots, with stems that can reach 1–2 m in height. The leaves are heart-shaped, 5–20 cm long in wild plants (often much larger in cultivated plants). The flowers are very small, 3–5 mm in diameter, green or reddish in color, with five petals; they are collected in dense ears. Pollination is anemophilous and secondarily entomophilous. The fruit consists of a group of hard modified achenes with lenticular seeds.

Property –
The properties of beetroot are linked to the particular composition of this plant and to the presence of some mineral salts and vitamins
Beetroot is attributed dietary and healthy properties: it absorbs toxins from the cells and facilitates their elimination, is purifying, mineralizing, antiseptic, restorative, promotes digestion, stimulates the production of bile and strengthens the gastric mucosa, cures anemia, infections of the brain system, stimulates the production of red blood cells, dissolves calcium deposits in blood vessels and prevents them from hardening, finally stimulating the lymphatic system.
In the kitchens of Eastern Europe and especially the former USSR, beetroot is the basis of the popular soup called boršč.
Recent developments in its use have had beet juice which, in recent years, has long been studied for its stimulating properties, especially in sports. Thanks to its high nitrate content it would be able to enhance muscle performance in a completely natural way. [6] According to research from the University of Exeter (England), beet juice would be able to improve the performance of athletes. The juice administered to a team of cyclists has shown an increase in their speed of more than 2.5%.
In general, the properties of beetroot concern:
– Regulates the pressure; as it has a particularly high content of potassium (300 mg / 100 g), which acts as a regulator of blood pressure and is essential for the proper functioning of the nervous system.
– It’s good for the heart; as it keeps the cardiovascular system healthy: it contains folic acid and betaine which, together, have the property of strengthening the capillaries.
– It is a natural tonic; among the vitamins contained in red beetroot, there is C, which strengthens the immune system, and some of the B group, such as B1, B3 and B9, or folic acid, essential in every phase of life and in particular during pregnancy.
– Purifying and anti-aging activity; the purifying and refreshing properties of beetroot are due to the presence of water and mineral salts (such as potassium) which facilitate the physiological drainage of liquids. The presence of betalain, powerful antioxidants, then slow down cell aging.
– Anti-anemic; the presence of iron makes red beetroot a food to be included in the diet of those who have low levels of iron in the blood or weakened red blood cells.
– Loss of appetite; it is a real antidote to loss of appetite thanks to its quantity of B vitamins and in particular folic acid (B9).
Furthermore, beetroot is able to absorb bile acids (which could interact with intestinal bacteria and produce carcinogens) and promote the growth of good bacteria, just like a probiotic.
It is also an ideal food to combat intestinal irregularities and constipation, thanks to the presence of dietary fiber. The high fiber content then makes the beetroot a purifying food, useful for eliminating toxins.
In general, it also has anti-inflammatory, anticancer and protective properties for the liver.
It has anticancer properties described in various scientific researches. It seems that the root is able to slow down the growth and development of cancer cells and in particular would have benefits in cases of colon, breast and prostate cancer.
It is an antidepressant as red beetroot is very rich in betaine and tryptophan, substances useful for fighting depression. In particular, tryptophan is an amino acid capable of stimulating the production of seratonin, the so-called “happiness hormone”.
It aids digestion as it stimulates the secretion of gastric juices which facilitate digestion.
It is good for the bones as it contains an important amount of calcium, magnesium, and numerous micronutrients essential for the well-being of the cells.
The presence of calcium and sodium helps to keep the elasticity of bones and tissues intact.
It fights diabetes as its regular consumption helps to reduce blood sugar levels, because it contains an antioxidant: alpha-lipoic acid.
Among the contraindications, it should be remembered that beetroot, in particular its leaves, are also a source of vitamin K, which is necessary for blood clotting. Consequently, beetroot is not very suitable for those who use anticoagulant drugs.
Furthermore, kidney stones sufferers should not eat beets due to their high mineral and oxalate content. Those with stomach acid problems should also avoid them, as they stimulate the production of gastric juices.