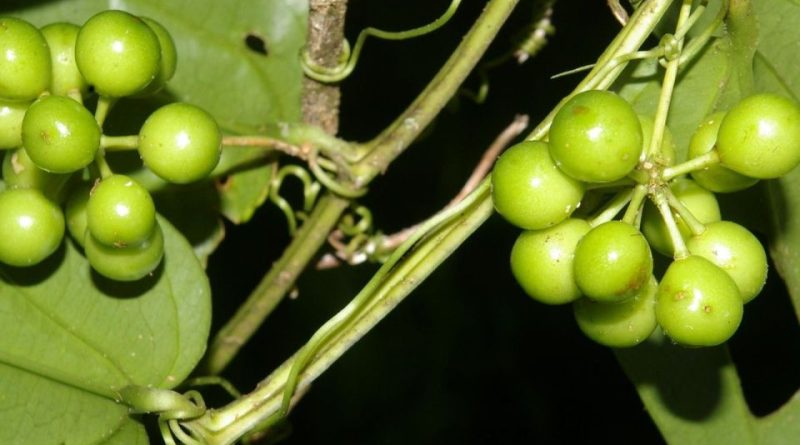 Etymology –
The term Smilax comes from the Greek σμιλαξ, smilax, the name used by the ancient authors to designate very different plants. In the Latin writers Pliny and Ovid the name was used for various thorny climbing plants.
The specific epithet officinalis comes from a medieval laboratory workshop: plants usable in pharmaceuticals, herbal medicine, liqueurs, perfumery and the like.

Geographic Distribution and Habitat –
Smilax officinalis is a plant native to central-southern America and south-western South America; present in Honduras, Nicaragua, Costa Rica, Panama, Colombia and Ecuador.
Its natural habitat is that of the rainforests, where it often climbs trees. 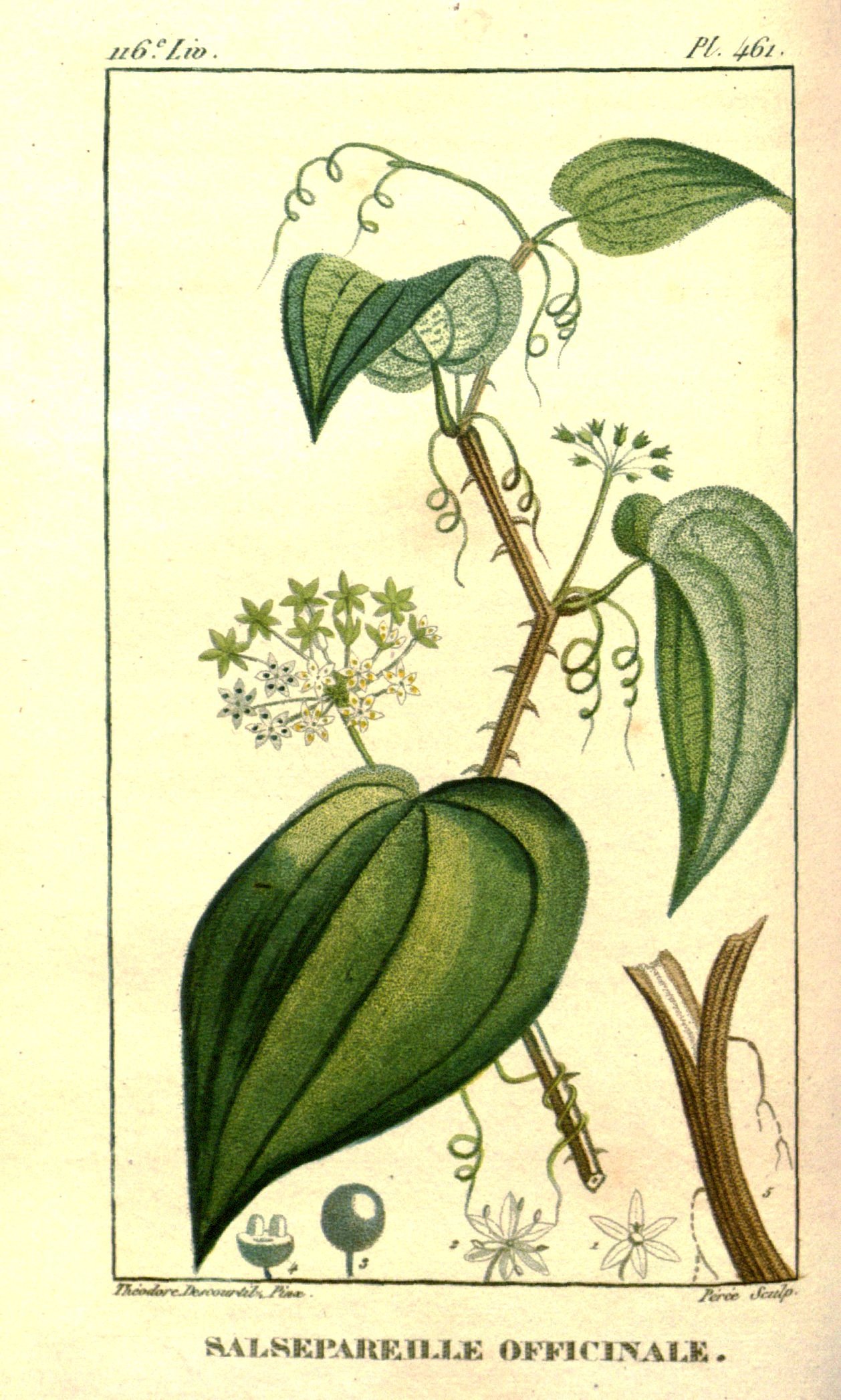 Description –
Smilax officinalis is a shrubby and climbing plant which, through tendrils, climbs trees and their foliage.
The stems are thorny and up to 50 meters long.
The leaves have a heart shape and paper texture.
The flowers are small, grouped in clusters, of a greenish white color.
The antesis is between May and June.
The plant produces a spherical berry that ranges in color from green when unripe to red when ripe, with a diameter of about 6-8 mm which ripens in autumn.
The berry is rubbery in texture and has a large spherical seed in the center. The fruit remains intact during the winter, when birds and other animals feed on it to survive. The seeds pass intact in the faeces of animals.

Cultivation –
Sarsaparilla is a perennial climbing plant that is mainly harvested in nature for both local and commercial use.
The plant grows more spontaneously but can be grown easily under different conditions.
Propagation normally occurs by seed, with sowing in seedbeds, transplanting the pots and planting in the open field in spring.

Customs and Traditions –
Smilax officinalis is a popular medicinal herb, used by the peoples of Central and South America for many hundreds of years, and in Europe since the 15th century.
Its roots are harvested and used to make traditional medicines and, like other species of Smilax, the sarsaparilla drink.
The root is used for medicinal purposes, it is long and tuberous, 180 – 250 cm long, odorless and quite tasteless.
The root is still used as an ingredient in beer and other beverages, where it is appreciated for its foaming properties, not for its flavoring properties.
The root has long been used as a traditional medicine in Central and South America, where it is used in the treatment of sexual impotence, rheumatism and joint pain, headaches, the common cold, skin disorders, including leprosy, and as general tonic in cases of physical weakness.
The plant has become popular in many parts of the world, and considerable research has been conducted on the medically active compounds present in the root.
The most important active compounds in the root are plant steroids and saponins; other compounds present include flavonoids.
Saponins have been shown to facilitate the body’s absorption of other drugs and phytochemicals, which explains its history of use in herbal formulas as an agent for bioavailability and to enhance potency and effect. of other herbs.
Clinical research has validated the traditional use of sarsaparilla for skin conditions such as psoriasis, eczema, acne and leprosy. In a clinical study with 92 patients it was reported that use of the root improved psoriatic lesions in 62% of cases and completely eliminated lesions in 18% of cases. The blood-cleansing properties of the root are believed to be largely responsible for this, and in particular the steroid sarsaponin, which has been shown to remove endotoxins from the blood.
The effective use of sarsaparilla in the treatment of leprosy was documented in a 1959 human trial.
Efficacy in treating adolescent acne caused by excess androgens has also received some experimental support.
It has also been documented that the flavonoids in sarsaparilla have immunomodulating and liver protection activities.
Clinical observations in China have shown that sarsaparilla is effective (according to blood tests) in about 90% of acute cases and 50% of chronic syphilis cases.
Other studies have shown the antibiotic, antifungal and antimicobacterial properties of the root of this plant. Its anti-inflammatory activity has been demonstrated in numerous in vitro and in vivo studies.
The root has been reported to have stimulating activity on the kidneys in humans and, in chronic nephritis; has been shown to increase urinary excretion of uric acid.
It has been claimed that the steroids sarsasapogenin and smilagenin have the ability to treat senile dementia, cognitive dysfunction and Alzheimer’s disease. All the studies supporting these claims, however, have not yet been published in peer-reviewed papers.
In modern herbal medicine the root is considered anodyne, antibacterial, antibiotic, antifungal, anti-inflammatory, blood purifying, purifying, diaphoretic, diuretic, digestive, febrifuge, hepatic and tonic.
It is thanks to its reputation as a blood purifier that the root of Smilax officinalis, and other similar species, has had a long history of use for syphilis and other sexually transmitted diseases around the world. It is also used in the treatment of conditions such as gout, syphilis, gonorrhea, rheumatism, wounds, arthritis, fever, cough, scrofula, hypertension, digestive disorders, psoriasis, skin diseases and cancer.
It is recommended for skin disorders, increased libido, hormonal balance and sports nutrition formulas. It is also commonly used in herbal preparations as a synergist or bioavailability aid, as the saponins in sarsaparilla root are believed to increase the absorption of other chemicals in the gut.
Other uses include agroforestry ones.
The stems of many Smilax species are covered with thorns, and sometimes these vines are grown to form impenetrable thickets.

Preparation Method –
Smilax officinalis is a plant of remote use by local populations whose root boasts countless uses.
In addition to being harvested in places of origin, the root is also widely available in health food stores, with a variety of tablets, capsules and tincture products sold today.
It can be found, both alone and as an ingredient in various herbal remedies.

Warning: Pharmaceutical applications and alimurgical uses are indicated for informational purposes only, they do not represent in any way a medical prescription; therefore no responsibility is taken for their use for curative, aesthetic or food purposes.
Photo source:
– https://bs.plantnet.org/image/o/378031618acbf3e41755bb52ce647b7dddd8ef62
– http://tropical.theferns.info/plantimages/1/e/1e7d1b9e53b09ecf004839164dfff5cf5e833f99.jpg