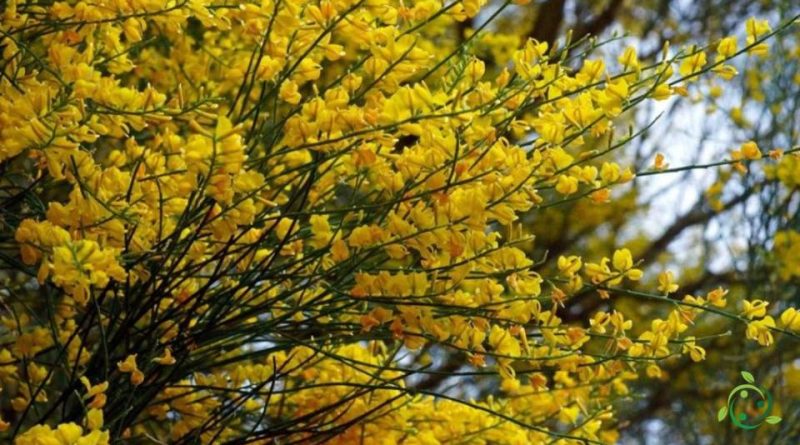 Suitable breeding habitat –
Etna broom is a plant that grows spontaneously in Sicily, endemic to the hilly and mountain slopes of Etna, sometimes in association with Adenocarpus bivonii, and in eastern Sardinia.
This plant was introduced, for reforestation, on Vesuvius, in Molise and on the Peloritani mountains with some ecological problems.
Its habitat is that of poor and rocky soils in often sloping areas in the presence of bushes and scrubs on calcareous or crystalline soils as in Sardinia, or lava as in Sicily.

Propagation –
Genista aetnensis is a plant with an extraordinary ability to adapt and thrive in truly extreme substrate conditions. In fact it also develops in volcanic soils, therefore very young and pedologically immature.
As an endemic species, its distribution range is extremely limited geographically, which does not prevent it from being “exported” elsewhere, albeit with particular attention, given some problems generated such as on Vesuvius.
From the altimetric point of view it grows between 100 and 2000 meters above sea level, and seems to prefer the eastern slopes of the slopes on which it develops. It requires full sun exposure and is a fully rustic plant. However, it does not tolerate salinity.
Propagation occurs by seed. The seeds must be harvested at the end of autumn (November-December) from plants that are already fully developed and in excellent vegetative conditions. The already dried legumes are collected from the plant and the two (or four) seeds are extracted and stored dry throughout the winter season. Sowing must be carried out in April and must be preceded by mechanical scarification with sandpaper or, but usually not recommended, by chemical scarification (30 minutes in sulfuric acid). In any case, after scarification, the seed is placed in the open field or in a container, taking care of the humidity of the substrate for the entire first growing season, otherwise the young seedlings will dry out. Alternatively, you can proceed by cutting or grafting. Within 2-3 weeks it reaches its final size.
The transplant must be done in the open field the following year in the spring period, taking care to assist the plant from an irrigation point of view for the first year in the summer.

Ecology –
The Etna broom is a plant that is particularly suitable in marginal, difficult areas and in soils that are still not very structured. In addition, since it attracts bees and pollinating insects, it is ideal in natural gardens where it helps to maintain the biodiversity of the microfauna high with a consequent improvement in the overall ecological balance.
In Sicily, until the creation of the Etna Park, it was used to obtain coal. In fact, it is possible to notice the typical growth of coppice plants in some areas.
Its introduction outside its original habitat must be evaluated very carefully.
This plant was introduced on Vesuvius after 1906 for afforestation and, therefore, in Campania it is to be considered alien.
In recent decades, in the Vesuvian ecosystems of greatest naturalistic interest, there has been a rapid increase of the Genista aetnensis with evident alteration of the natural dynamism of the vegetation and impairment of the landscape.
The data collected have shown that in just under 40 years this alien species for the Vesuvius area is able to profoundly modify the quality of the Vesuvian soils by interfering with pedogenetic processes. The rapid accumulation of organic C and total N under its canopy is to be related to the abundant production of litter and its slow degradation. At the same time, a high hydrophobicity was found in the soils under the canopy which has repercussions on the hydrology of the substrate.
Furthermore, this species had a significant impact on the structure and biodiversity of the Vesuvian ecosystem. However, the intensity of the alterations induced by this plant differs depending on the ontogenetic stage considered.
At the moment, studies are still underway to understand the influences of this plant on the evolution of the ecosystem, highlighting, once again, that the introduction of alien species in a new territory should always be subjected to research centers that evaluate their potential interference. ecological.