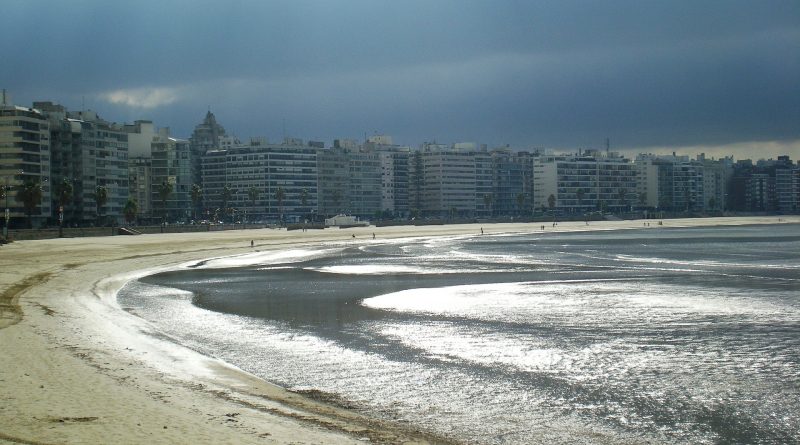 Uruguay is a South American state with an area of ​​176,220 km² and a population of 3,431,932 inhabitants.
The capital of Uruguay is Montevideo, with a population of 1,338,408 (as of 2009).
Uruguay borders Brazil to the north-east and north, Argentina to the south-west, the Río de la Plata to the south and the Atlantic Ocean to the east. Uruguay is a presidential republic, the current head of state is Luís Lacalle Pou (White Party). The official language is Spanish.

Geography –
Uruguay is a state that borders 985 km to the north with Brazil and 579 km to the west with Argentina. This country has a coastline of 660 km.
The territory of Uruguay is located in a transition belt from the Argentine pampas to the hilly parts of southern Brazil. Much of the country is located on a vast lowland with rare hill formations that hardly reach 500 m a.s.l., the best known are the Cuchilla de Haedo in the north and the Cuchilla Grande in the eastern part of the country.
To the west, along the course of Uruguay, there are large swamps often flooded by the floods of the river.
In the southeastern part of the coast there is a narrow coastal plain, sandy and characterized by lagoons, while the coast overlooking the Río de la Plata is steeper.
The highest point in the country is Cerro Catedral (514 m a.s.l.) followed by Cerro Ventana (420 m) and Cerro Colorado (299 m). Overall, the country is quite flat, only about 10% of the territory exceeds 200 m a.s.l. The land is quite fertile and exploitable for agricultural purposes, the wooded areas are limited (about 5% of the territory).
From the hydrographic point of view it is a country rich in water. Its borders to the east, south and west are bordered by important rivers or stretches of sea.
The country’s river systems are essentially three:
– the rivers that flow to the west feed the Río Uruguay which delimits the border with Argentina, the banks of the Uruguay river are characterized by plains periodically affected by vast floods. The most important of its tributaries is the Rio Negro which crosses the entire country from north-east to west before flowing into the Río Uruguay, a barrier on its course, near Paso de los Toros has created an artificial basin, the Embalse del Río Negro which is the largest artificial lake in South America. The main tributary of the Río Negro is the Río Yí.
– rivers that flow eastward flow into the Atlantic or into the lagoons, generally have a shallow depth and a variable flow. Many flow into the lagoons of the coastal plain, the largest of which, Laguna Merín, marks the border with Brazil.
– southbound rivers flow into the Río de la Plata.
The hydrographic system of Uruguay is completed by some lakes of which we remember, in the easternmost part of the nation, a large coastal lake, the Merin Lagoon (3,750 Km²), the surface of which is mostly found in Brazil while further south there are others smaller lake basins.

Climate –
Uruguay has a predominantly temperate climate, with average temperatures similar to those of the Mediterranean areas: we therefore find mild winters and hot summers. The exception is the region north of the country where the values ​​are higher and the subtropical climate. Furthermore, due to the conformation of its territory, mainly flat and without high peaks, Uruguay is greatly affected by the influence of ocean currents and winds. This involves, compared to the Mediterranean climate, more abundant and widely distributed rainfall throughout the year. In summer, from December to March, the heat can be very intense, with peaks of 38-40 ° and a lot of sun. The temperature, in this period, is mitigated by the ocean breeze and by the not rare afternoon thunderstorms. Average temperatures in Montevideo are between 20 and 30 ° while in the far north, in Artigas for example, higher values ​​are recorded (heat waves are possible as early as November) and more abundant rainfall. Winter, from June to August, is typically mild, with minimum temperatures between 7 and 15 °. This season, especially in the south, can be particularly windy and disturbed. Snowfalls are very rare, but light frosts are possible caused by the Pamperos, a cold wind coming from the Arctic. Mid-seasons have mostly mild temperatures, but the weather can be unstable in terms of wind and rain, especially in autumn (March-April).
In the northern part of the country the climate is subtropical while in the south it is Mediterranean offering weather conditions very similar to those of Italy and Spain. The average annual temperature is 17.5 ° C. The hottest month is January with an average temperature of 21 ° C while the coldest is June (average of 6 ° C).
Precipitation is distributed throughout the year and ranges from an average of 1 000 mm / year up to 1 400 mm / year in the northern part of the country. The winter semester is usually drier than the summer one, the wettest month is March. 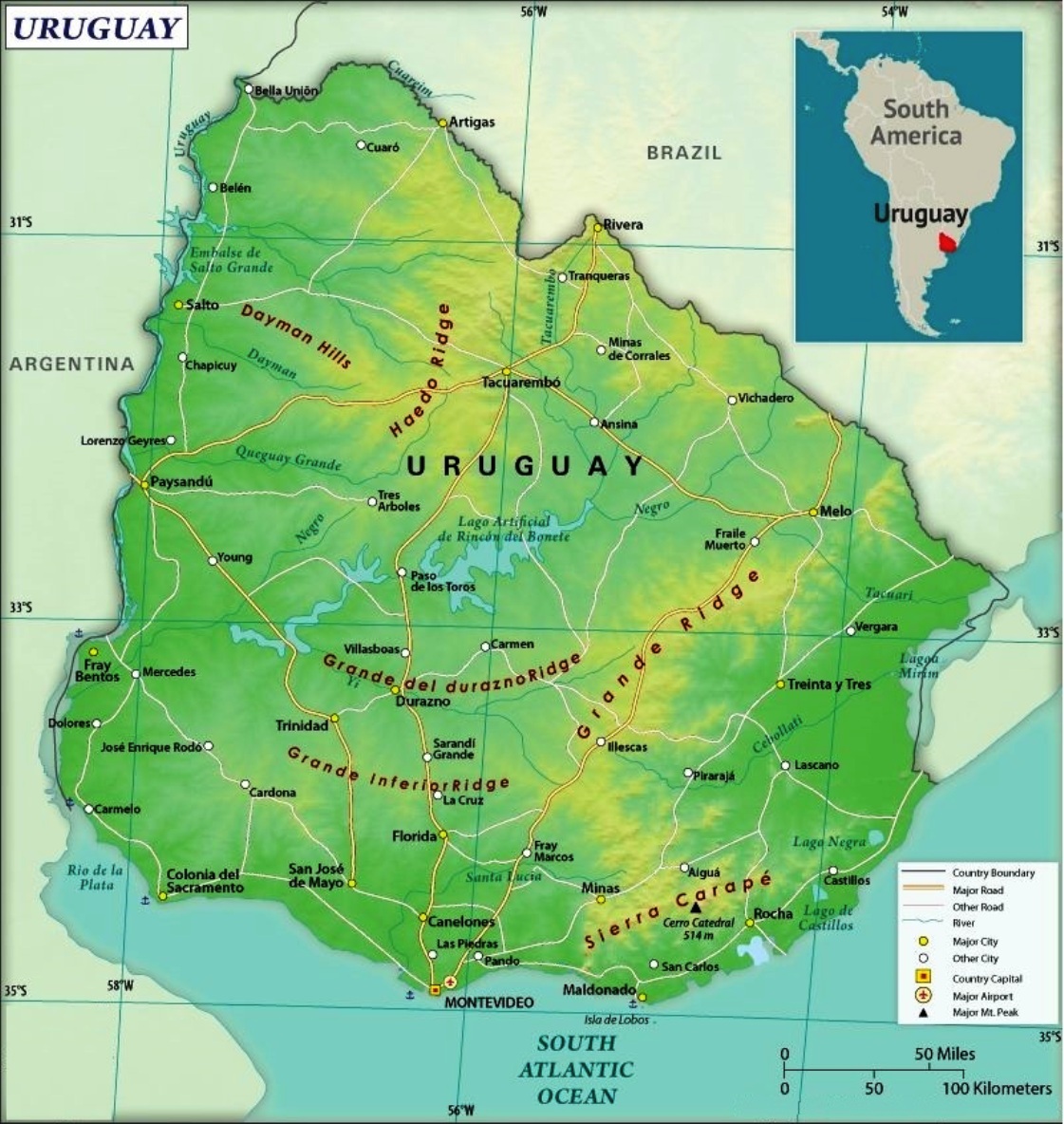 Flora-
In Uruguay, the establishment of the Ministry for the Environment (Ministerio de Vivienda, Ordenamiento Territorial y Medio Ambiente) dates back to 1991 and therefore this country pays a delay in protecting its ecosystem.
The greatest environmental risks are related to river pollution, soil erosion and the lack of a waste recycling policy. The planned construction of two paper mills along the Uruguay River has led to numerous demonstrations and diplomatic negotiations with Argentina.
1% of the territory is protected, 0.1% is partially protected.
Uruguay has signed the following treaties: Ramsar, CITES, toxic waste (Basel), CFC emissions (Montreal Protocol), biodiversity (CBD), greenhouse effect (Kyoto Protocol).
Uruguay has developed the theme of protected areas very slowly and has not always managed to organize its efficient management.
The hole of this country is present above all, in the prairies, which occupy the vast majority of the territory and are interrupted by groves, forests, marshy or sandy areas. These are home to more than 2,000 plant species such as eucalyptus, ceiba, umbù, acacia, poplar willow, mimosa, myrtle, algaroba and quebracho.
The coast stretches for 250 km and is dotted with rocky peaks, sandy beaches and coastal ravines. The vegetation that grows there is made up of dibujante grass, tembladerilla, senecione and espartatin.
Wetlands, called “humedales”, represent different kinds of aquatic environments, perfect habitats for birds. The marshes benefit from a varied vegetation that changes according to the quality and level of the water. The family of Scirpus and rhynchospora is part of the vegetation of this environment.
The palm groves are composed of the Pindus, an elegant fast-growing palm, but also of the Butia, a palm with gray leaves and a voluminous trunk.
The wooded area is called Monte, there are 4 types of Monte. Monte Ribereno is made up of more or less narrow strips that do not exceed 200 m. The climate of the north, wetter and warmer, allows a greater proliferation of the number of species. Some species such as the ceiba, the mataojos, the criollo willow, the colored and white sarandi look for humid environments or close to aquifers. Others prefer places further away from water sources, such as pitanga, myrtle, canelon or peach tree. Monte Parque is a set of isolated groves that alternate with the prairie. It is found throughout the country. Depending on its geographical location, it brings together tree species such as acacia, cornilla, pepper, caroba, pallo de fiero and tala. Monte Serrano is often associated with mountains or steep places. The vegetation is essentially composed of low and leafy trees. You can also see coronilla, myrtles, aruera, talas, guavas. Monte di Quebrada is a less extensive type of forest than before. It is specific to the shelters formed by the ravines and humid ravines of the north. The most abundant species is the espina de la cruz, but coronillas, canelons, congorosa are also found.

Fauna –
The fauna of Uruguay is largely that characteristic of the Uruguayan savannah. Grazing mammals include the Pampas deer (Ozotoceros bezoarticus), Guazuvirá deer (Mazama gouazoubira), and capybara (Hydrochoerus hydrochaeris), the largest living rodent in the world.
Uruguay is home to a rich bird life, including the southern lapwing and the magnificent black-necked swan. As a result, bird watching has become popular in select locations.
There are several snakes, with four venomous species: the rattlesnake (Crotalus durissus terrificus), the coral snake (Micrurus altirostris), the yarará (Bothrops pubescens) and the cross viper (Bothrops alternatus).
Despite the humid climate of much of the country, the vast majority of Uruguay’s land is made up of savannas, so there isn’t much diversity of amphibians. However, the Argentine horned frog, Ceratophrys ornata, thrives in the savannas of central and northwestern Uruguay. Other notable Uruguayan amphibian species include Pseudis minuta, Boana pulchella, Rhinella achavali, and Rhinella diptycha.
Aquatic life is also rich, with species such as the tararira (Hoplias malabaricus) or the white-dotted skate.
Unfortunately, in Uruguay, there are several extinct species.
Extinct fauna includes megafauna, such as Josephoartigasia monesi, Lestobradys, and Glyptodon (some of them coexisted with the arrival of humans, responsible for their extinction).
The oldest extinct species include Neuquensaurus and Meridiosaurus, both from the Cretaceous period.
Even the jaguars are now extinct.