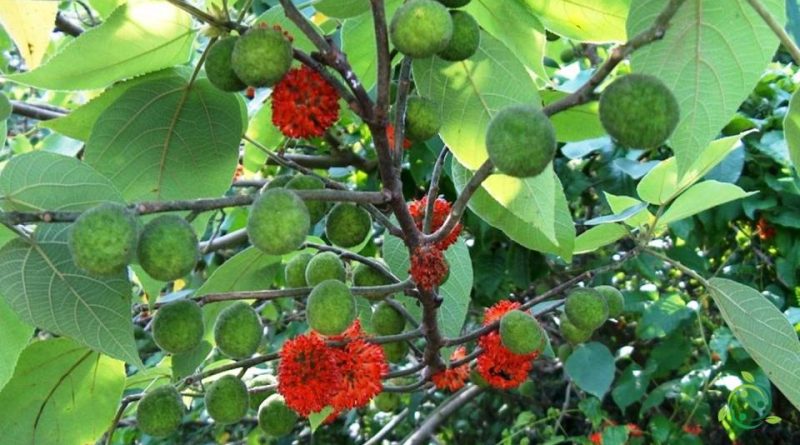 The paper mulberry (Broussonetia papyrifera (L.) L’Hér. Ex Vent.) Is a tree of the Moraceae family, native to Asia.

Suitable breeding habitat –
Broussonetia papyrifera is a plant native to Asia, in an area that includes Taiwan, China, Japan, Korea, Southeast Asia, Burma and India.
This species has been widely cultivated elsewhere for some time and grows as an introduced species in parts of Europe, the United States and Africa.
In Europe it was introduced towards the middle of the 18th century as an ornamental plant. It was used to create the first type of paper, to be attributed to Cai Lun, a Chinese inventor, who lived under the Han dynasty, who later became a high official of Emperor He, where he took care of technical innovations starting from weapons and to whom he is traditionally attributed to the invention of paper around 105.
This plant after its introduction in Europe, as an ornamental essence, soon escaped from gardens and parks thanks to its frugal and pioneering character. Today it is easily found along the edges of roads and railway tracks and in the uncultivated areas along the beaches.
Its habitat in nature is that of woods, mountain ravines and forests, arid or humid lowland woods, open areas, secondary forest, along streams in broad-leaved woods, preferring humidity, at altitudes up to 2,000 meters.
It is a rustic plant, indifferent to the substrate, withstands the cold and poorly luminous positions.

Propagation –
Broussonetia papyrifera is a very adaptable tree that grows almost up to about 2,000 meters, but its range also extends to the temperate zone where mature plants can withstand temperatures down to about -10 ° C.
It grows best in areas where annual daytime temperatures are between 15 and 28 ° C and prefers average annual rainfall in the range 800 – 2,500 mm, but tolerates 500 – 3,000 mm.
It is easily grown in a warm, sunny location in any soil and is a drought-tolerant species once it takes root.
From the pedological point of view it grows well even on poor sandy or gravelly soils in conditions of pH between 5 and 7.5, tolerating between 4.5 and 8.
Fast growing plant resistant to urban pollution.
Propagation can occur by seed and no pretreatment is required. The sowing must be done directly in the pots; germination generally occurs within 1 – 3 months at 15 ° C.
The young seedlings must be grown and transplanted when they are large enough to be able to withstand the planting in the open field.
It can also be propagated by cuttings with semi-mature wood, 8 – 12 cm long or even mature wood of seasonal branches.

Ecology –
The paper mulberry boasts an ancient history. It was used by the ancient Austronesians to make bark.
Various genetic studies have traced the origins of Broussonetia papyrifera populations in the remote Pacific to Taiwan via New Guinea and Sulawesi. In the Philippines, along the path of expansion, Broussonetia papyrifera is mostly descendants of modern introductions in 1935. Ancient introductions presumably died out in prehistoric times due to their replacement by hand-woven fabrics, as Broussonetia papyrifera generally survives only under human cultivation. However, his absence in the Philippines further underlines his origins in Taiwan and not within the Southeast Asian island. Additionally, Broussonetia papyrifera populations in New Guinea also show genetic influx from another expansion from Indochina and southern China.
It is believed to be the most transported fiber crop in prehistoric times.
Broussonetia papyrifera is present in almost all islands or groups of islands in Polynesia, including Rapa Nui and Aotearoa. Some populations have recently become extinct after ceasing to be cultivated, such as in the Cook Islands and Mangareva, although reports and prepared specimens of bark and herbarium exist in museum collections collected by Europeans during the colonial era. They were spread by the Polynesians mainly through vegetative propagation with root cuttings and shoots. They were rarely grown from seeds, as most plants were harvested before flowering, when the stems reach about 2.5 cm in diameter, as described by 18th-century European accounts. Wild sexually reproduced plants are unknown, as the plants are dioecious and require the presence of both male and female specimens on an island.
The tree was introduced to New Zealand by early Maori settlers (oral histories mention the Ōtūrereao, Tainui, and Aotea canoes as sources).
The tree was commonly seen during James Cook’s travels in the 1870s, however the tree likely became extinct in the 1840s, due to reduced cultivation and predation by pigs and cattle that ate the ‘tree. It was then reintroduced to New Zealand by Japanese plants during European colonization.