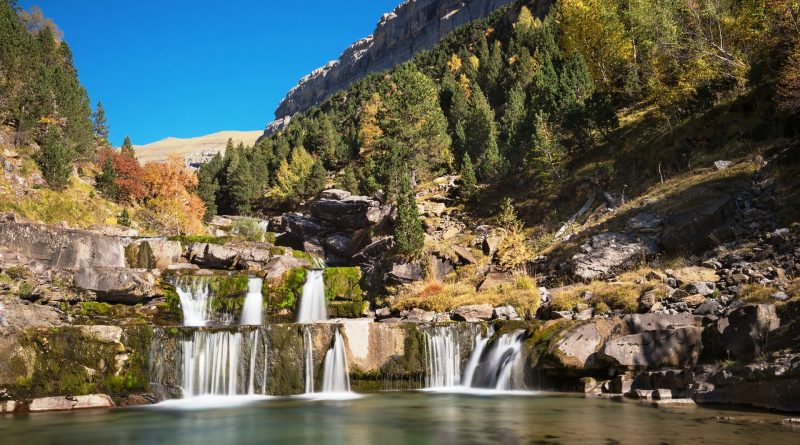 The Ordesa and Monte Perdido National Park, whose WDPA Code is: 893, is a protected area in Spain with a land area of: 156.08 km².
The Ordesa and Monte Perdido National Park was established on August 16, 1918, with the main purpose of saving the “bucardo” (Capra pyrenaica pyrenaica), which however was declared extinct in the year 2000.
It is located on the southern slope of the central Pyrenees, in the territory of the Comarca of Sobrarbe, in the province of Huesca. It is bordered to the north by the French Pyrenees National Park.
Originally it had an extension of just 21 km² concerning only the Ordesa valley; it was subsequently extended on July 13, 1982 up to the current extension.
This park, by date of establishment, is the second oldest in Spain. In 2015, with 598,950 visitors, it was the seventh Spanish national park by number of visitors.

Geography –
The Ordesa and Monte Perdido National Park has an altitude ranging between 700 m a.s.l. in the río Bellós and the 3348 m of Monte Perdido.
The topography of the park is dominated by the Tres Sorores massif, Treserols, the highest limestone massif in Europe. Its highest elevation is Monte Perdido, from which a series of imposing mountain ridges and glacial valleys descend more or less radially. The most characteristic and emblematic is the Oresa valley, crossed by the Arazas river, origin of the national park, which opens in an east-west direction, but also the Añisclo canyon, crossed by the Bellós river, in a north-south direction, stands out. , the Escuaín gorges, through which the Yaga river passes, in a south-easterly direction, and the Pineta valley, crossed by the Cinca, in an easterly direction. Likewise, although it does not belong to the central area of ​​the park but to its peripheral area, the Bujaruelo valley in the western area should be highlighted. Already in French territory, the valley and the circus of Gavarnie, within the Pyrenees National Park, another glacial cirque which has the highest waterfall in Europe at its head, with over 400 meters of altitude.
The basic morphology of the park is due to two orogenesis, but mainly to the folded and alpine hill of the tertiary period, then modeled by glacial erosion during the Quaternary era, giving rise to a series of well-defined cirques and glacial valleys, such such as the Ordesa valley and the Pineta valley. Today on the north face of Monte Perdido there is still a glacier, albeit in retreat. Most of the rock in the national park is limestone, which overlaps the karst and fluvial transformation of the landscape, with multiple caves, canyons, potholes, etc., on top of the most obvious and ancient glacial erosion. Here we must highlight the Añisclo canyon and the Escuaín gorges, in which glacial cirques appear at their sources, but which are later enclosed in deep gorges.
The high areas of the park (altitudes above 2,000 m) are extremely arid, since all the rainwater is rapidly collected by the karst system. The valley floors are instead covered by exuberant vegetation dominated by beech and fir trees that give way to black pine with increasing altitude.

Climate –
The Ordesa and Monte Perdido National Park is generally characterized by a typically Pyrenean climate, even if the difference in height ranging from 750 meters at the entrance of the Añisclo canyon to the 3,355 meters of Monte Perdido and the original orientation of each valley , causes there to be an enormous climatic variety; note the strong variations in humidity and temperature between day and night. Thermal inversions that are reflected in the distribution of the plant planes. Variable regime of valley and mountain winds. 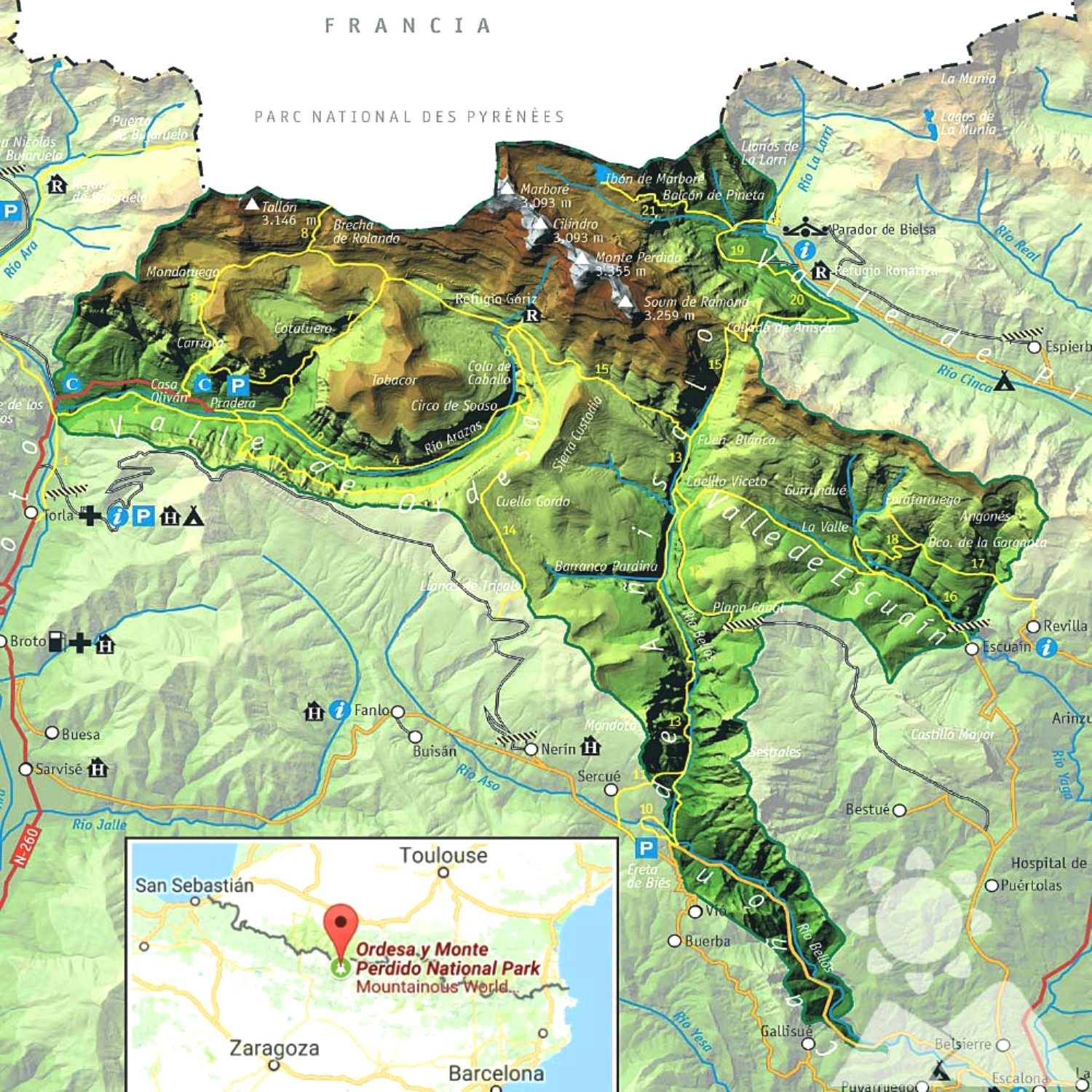 Flora –
The Ordesa and Monte Perdido National Park welcomes a very varied vegetation, the result of the different habitats and its position, already part of continental Europe. Over 1,500 plant species are found there.
The flora of the park represents almost 45% of the plants of the Aragonese Pyrenees, of which 83 are exclusive plants of the Pyrenees, that is half of the endemism of the mountain range. In the more than 30 peaks of over 3,000 of the protected territory and its periphery, almost 100 species can be observed, representing two thirds of the Alpine flora of the Pyrenees.
One of the main features of the park is the presence of vast areas of cliffs and walls, as well as limestone scree, which host a large number of exclusive (endemic) Pyrenean species, such as Borderea pyrenaica, Campanula cochleariifolia, Ramonda myconi, Silene borderei, Androsace cylindrica, Pinguicula longifolia, Petrocoptis crassifolia, etc.
One of the first scholars of the flora of Ordesa was Pedro Montserrat Recoder in the company of Taurino Mariano Losa, in the 40s. However, in recent years an attempt has been made to update the knowledge on its flora and vegetation with the completion of several doctoral theses and the publication of two books.
The national park is one of the pilot areas where sampling is carried out for the GLORIA international research project, a long-term study of alpine flora to assess the impacts of climate change on the biodiversity of the Earth’s high mountains.
In the park there is a mixture of climatic influences that gives rise to the appearance of different types of plant communities. Thus, we have from the Mediterranean vegetation that penetrates the lower parts such as Añisclo or Escuaín, passing through the sub-Mediterranean of the stony limestone ridges and dried by the wind, or the “ocean wells” with the presence of typical plants of the closest to the Gulf of Biscay, and ends with the vegetation of the alpine environment of the high peaks.
112 plant species have been inventoried, the most diversified being pastures and meadows, followed by those that colonize rocks and scree and woods. 75% of plant communities are habitats of community importance, of which four are priority for conservation in the European Union.
Forests occupy just 20% of the park’s extension. In the mountain range (800-1700 m high) there are numerous forests of beech (Fagus sylvatica), silver fir (Abies alba), Scots pine (Pinus sylvestris), English oak (Quercus subpyrenaica), tremoline (Populus tremula), with minor presence of birch trees (Betula pendula), ash trees (Fraxinus excelsior), willows (Salix elaeagnos), hazelnuts (Corylus avellana) and also holm oaks (Quercus rotundifolia) in the lower part, while in the upper part, up to 2000 m, the black pine dominates (Pinus uncinata). The undergrowth up to 1,800 m is dominated by boxwood (Buxus sempervirens).
In the high altitude pastures (between 2,000 and 2,700 meters) fescue (especially Festuca nigrescens and Festuca gautieri subsp. Scoparia) dominate and it is one of the best areas in the Pyrenees to see the famous flo de nieu or ‘snow flower’ ( Leontopodium alpinum), also called edelweiss, which was the symbol of the national park and is protected, like all plant species in the park.

Fauna –
The Ordesa and Monte Perdido National Park is home to 171 species of birds (including the bearded vulture, a vulture with a wingspan of 3 meters, which is rarely seen outside Africa), 32 species of mammals and 8 species of reptiles.
The varied fauna of the park is the result of the different habitats it hosts and its condition on the border between continental Europe and the Mediterranean. About 38 species of mammals, 68 nesting birds (about 120 if emigrants are counted), 5 amphibians, 8 reptiles and 5 fish have been counted.
The chamois (called chamois in Aragonese) whose population in the park is about 2000 specimens, the roe deer that went from being locally extinct in the mid-twentieth century to having a growing population today, the overpopulated presence of the wild boar together with two recently “recovered” (or in the process of being recovered) such as the deer, which seems to want to return to its evident Pyrenean expansion, and the brown bear, whose tiny Pyrenean population (25-32 specimens) made itself felt inside the wilder sectors of the protected area. To this must be added an enormous variety of small mammals (otters, foxes, genets, marmots, wild cats, martens, dormice, badgers, squirrels, country mice, ferrets, voles, shrews, Pyrenean desman).
Since 2014, the Spanish ibex has been successfully reintroduced into the Pyrenees National Park. In the following years some specimens moved to the Ordesa National Park, precisely in the Ara river valley. 9
As for the avifauna, in the forests of the national park there are species such as the capercaillie (mostly of small populations and unknown to them), the tengmalm owl (recently rediscovered), the black woodpecker, the royal woodpecker, the beak white-backed, tawny owl, scops owl, nightjar, wren and creeper.
The gorges and high mountain areas are the habitat of the bearded vulture, one of the largest birds on the planet which has found in the Pyrenees in general and in this valley in particular one of its last and most consolidated refuges. There is also the golden eagle, the most notable predator in the skies of the park, the griffon vulture, occasionally the black vulture, the Egyptian vulture, the red kite, the red kite, the biancone, all predators of the abundant marmot. , the gray partridge or the very rare ptarmigan, whose populations in the highlands of Ordesa-Pineta barely reach twenty specimens.
Among the numerous amphibians present stands out the Pyrenean Frog, an endemism of the Pyrenees described in the 90s with specimens of the park, which lives in clean water streams or the Pyrenean newt, an indicator of the purity of the park’s waters.