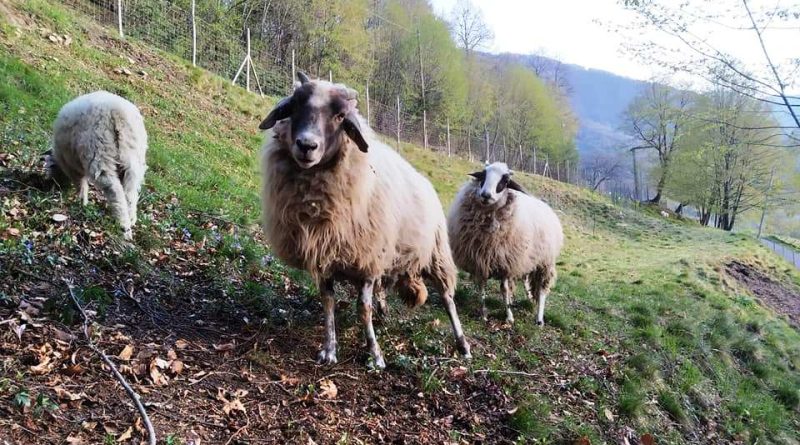 La Ciuta is an Italian sheep (Ovis aries Linnaeus, 1758), originally from Valtellina and Alto Lario, with a main aptitude for meat production.

Geographic and Area Distribution –
Ciuta is an indigenous sheep breed originating from Valtellina and Alto Lario where it was kept and bred in marginal areas such as Val Masino, a small side valley to Valtellina, where agriculture was linked to subsistence rather than commercial logics.
The ciuta is a robust and frugal breed that is raised in a very harsh habitat; during most of the year the animals live on steep pastures at heights ranging from 500 to 2700 meters and only in the winter months are they foraged with hay and dry leaves.

Origins and History –
The ciuta is an indigenous breed of sheep and the term “ciuta” means “little sheep” and derives from the Romansh language, spoken in the neighboring Swiss canton of Grisons.
The only official information is that reported on the CNR atlas of 1983.
A typical feature of the population is the presence of horns, in the helical-shaped ram and in females, when present similar to those of goats, this characteristic is found only in some primordial breeds, such as the now extinct sheep the Tujetsch sheep of the Grisons Oberland or the Austrian Montafon reared in Vorarlberg, which could be descended from the ancient bog sheep (ovis aries palustris). Interestingly, all three breeds are called, each in their own local language, “Tschüt”, which means little sheep.
Local evidence and the discovery of garments with excellent characteristics certify their presence also in some areas of the ancient county of Bormio, especially in the municipality of Sondalo, where it was popularly called “cirula” and the lamb “ciutin”.
La Ciuta was defined as an indigenous sheep population with probable common origins with the Ciavenasca, and is originally from the province of Sondrio.
It was believed that this breed was extinct, but a few years ago, in 2001, sheep were identified (in the far north of the province of Como, on the border with Valchiavenna) which presented the morphological traits attributable to this sheep population.
In fact, until a recent past, this breed was at very serious risk of extinction, due to the abandonment of the countryside. At the same time, since pastures previously used by cattle have also become available and the need to exploit the most inaccessible and marginal areas has disappeared, sheep of other heavier breeds have been introduced, such as the Bergamo sheep or the merinos, which have contributed to the hybridization of the ciuta and the almost disappearance of the native breed. In recent years, the Pro Patrimonio Montano association, together with a group of local breeders, has launched a recovery project, forming some new nuclei of purebred animals and collecting all the necessary documentation for the recognition of the breed. Thanks to this work, the population of the Ciuta breed, although not yet safe, is gradually recovering. To date, there are about 400 animals, partly registered in the herd books, partly not yet registered but known and followed by the Patrimont network.

Morphology –
La Ciuta is a sheep with a mostly straw-white fleece but there are also other variants of color, brown, black and spotted; it is half open, made up of short tufts.
A typical feature of the population is the presence of horns, in the helical-shaped ram and in females, when present, similar to those of goats. This characteristic is found only in some primordial breeds, such as the now extinct Tujtsch sheep of the Graubünden Oberland or the Austrian Montafon reared in Vorarlberg, which could descend from the ancient bog sheep (Ovis aries palustris). Interestingly, all three breeds are called, each in their own local language, “Tschüt”, which means little sheep.
It is a small sheep with a squat head with an almost straight profile; the ears are of medium length, carried horizontally.
The trunk is short, rounded, voluminous in the abdominal region.
The average height at the withers is 45-50 cm in males and 40-45 cm in females.
The average weight fluctuates between 35-40 kg in males and 30-35 in females.

Productive attitude –
The Ciuta is a sheep breed used mainly for the production of meat which is obtained from slaughtered lambs at a weight of 12-15 kg; in fact, writings from the end of the 19th century mention it as an animal with a triple aptitude with whose milk, again in Val Masino, a 3-milk cheese was produced: Vaccino Caprino and Ovino.
Today, the milk is intended exclusively for feeding lamb.
As for the annual production of wool per garment, this is around 1 kg, of poor quality.
Historically wool was spun and knitted for making garments and quilts, or carded for padding mattresses, studies are currently underway in order to know its characteristics and identify the best destination. Territorial projects are trying to reactivate the supply chain regarding the processing of wool, it is intended to make the most of the products that will then be made with the fleece of this animal presumably outer clothing or furnishing elements, using the techniques of felting, knitted or knitted yarns. chassis.
As far as reproduction is concerned, three births are obtained in two years, with a very low rate of twinning
From the point of view of its ecological adaptability, the Ciuta is robust and frugal and its habitat, as mentioned, is very hard as during almost the whole year the animals live on steep pastures at heights ranging from 500 to 2700 meters, and foraged with hay and dry leaves only in the winter months.
This breed is characterized by its agility and for having maintained those characteristics that allow it to be able to better defend itself from predators, such as having maintained the muscles of the ears which it carries horizontally and manages to orient, thus managing to capture any dangers sooner.