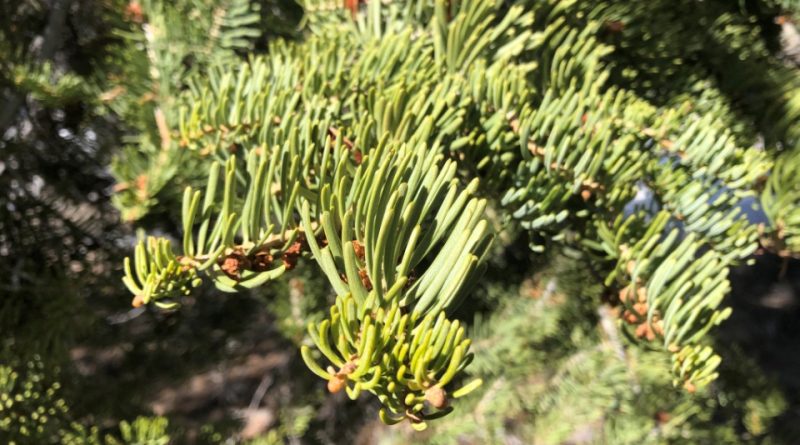 Etymology –
The term Abies comes from Abies which is the classical Latin name (Virgil, Egloghe, from the Sanskrit root abh gush of resin); according to another interpretation it would derive from the Greek word ἄβιος = long-lived.
The specific name concolor means of the same color as that of the reference taxon.

Geographic Distribution and Habitat –
The white fir is an endemic plant of the Rocky Mountains (from Oregon to Idaho) and of the Californian Coast Range up to Arizona and Colorado; it is present in Mexico in Baja California, in the states of Chihuahua and Sonora.
This plant was imported from the Austro-Hungarian Empire in the early 1900s to Italy (Val di Fiemme) where it found great development in the state-owned forests of Val Cadino, today perfectly adapted to the local ecosystem.
Its natural habitat is that of the mountains at altitudes between 600 and 3,000 m in the western part of the range of origin and between 1,800 and 3,350 m in the Rocky Mountains with annual rainfall between 500 and 1,800 mm, with hot and dry summers. and cold winters. It grows on rocky, basaltic or granite soils, sometimes even on sandy soils. It can form pure woods or in association with Abies magnifica, Abies procera, Abies grandis, Pseudotsuga menziesii var. glauca, Populus tremuloides and species of the genus Pinus. 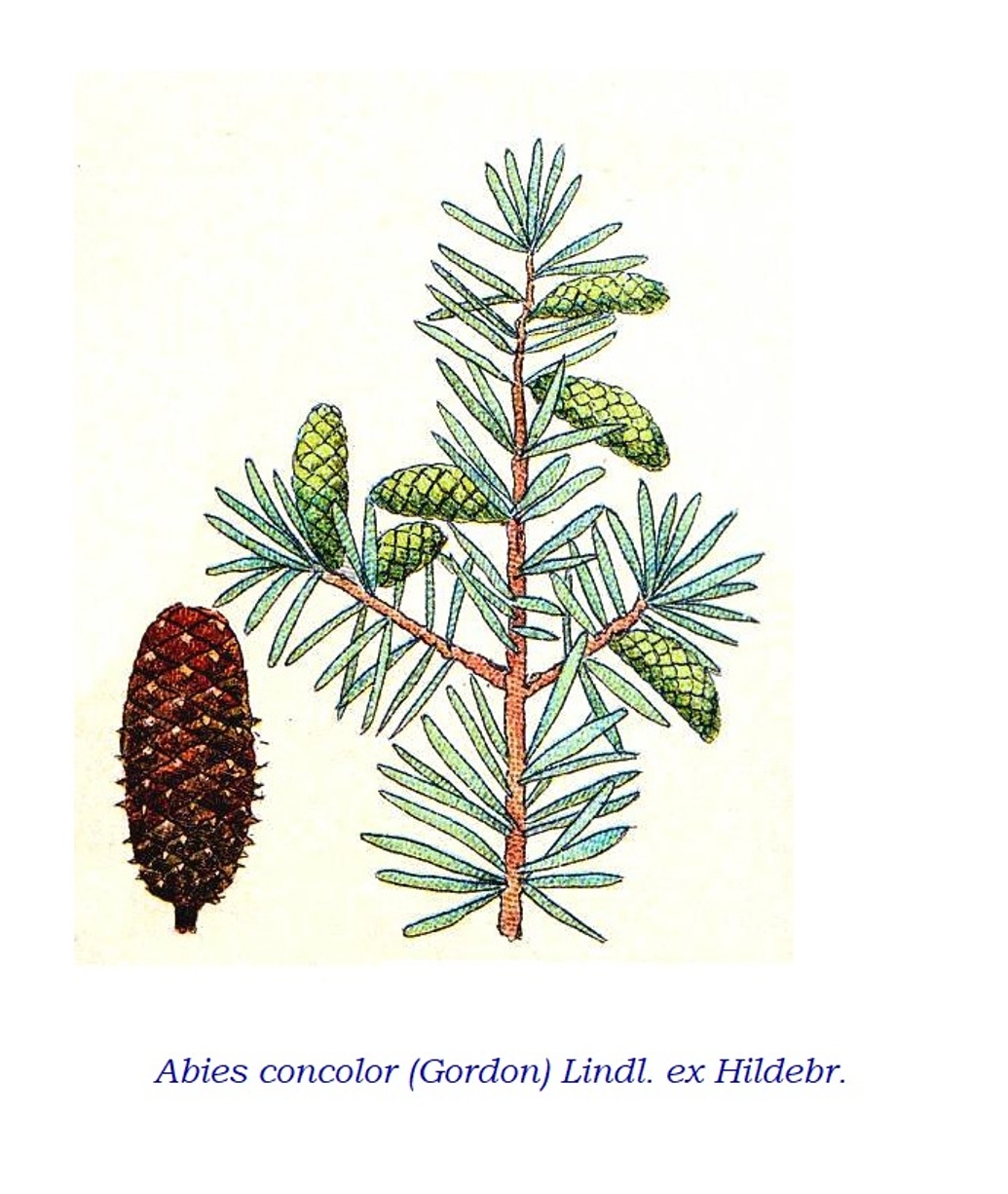 Description –
The Abies concolor is a medium-large arboreal conifer, conical with a flat top in older specimens, which reaches heights of 60 m and whose trunk can be up to almost 2 m in diameter.
It has a smooth, gray bark which with age splits into longitudinal cracks that reveal the yellowish periderm below.
The main branches branch off from the trunk at right angles, the older ones assuming a drooping posture; the secondary twigs are opposite, smooth or with yellowish down.
It has needle-like leaves, gray-green in color, 1,5-6 cm long, with a rounded or acute apex, shaped like an arrow; the stomata are arranged both on the upper page (in 4-8 bands) and on the lower one (in 7-12 bands).
The buds are resinous, initially round in shape, then conical, brown; the pearls that cover them are triangular, more or less resinous, with an entire margin and an acute point.
Pollinated male strobili are more or less red, purple, or green in color.
The female ones are yellowish green or purple, light brown when ripe, they are cylindrical or elliptical, up to 12 cm long and up to 4.5 cm broad, with short or sessile peduncles; the scales are fan-shaped, 3 cm long, 3.5 cm wide, smooth. The bracts are ovoid with two 1.5 cm lateral wings. The male strobili, hanging, are 2 cm long, with red or pink microsporophylls. The seeds, cuneate, of light brown color, are up to 1o mm long, with light brown wings of 20 mm, oblong-cuneate. The cotyledons are 5-9.

Cultivation –
Abies concolor is an evergreen tree from which a useful timber is obtained which is often harvested and traded. It is a very ornamental tree and many dwarf forms have been created for horticultural use and the tree is sometimes grown as a “Christmas tree”.
The Abies concolor is an extremely widespread species found in numerous locations in much of mountainous western North America and, more scattered, in Mexico. The plant is currently classified as “Least Concern” on the IUCN Red List of Threatened Species.
As far as cultivation is concerned, it should be considered that it is a plant from the temperate to subtropical zone, where it is found at altitudes up to 3,100 meters. It grows best in areas where annual daytime temperatures are between 0 and 18 ° C, but can tolerate between 5 and 22 ° C. in a dormant state it can survive temperatures down to about -20 ° C, but the spring vegetation can be severely damaged at -1 ° C.
It prefers an average annual rainfall in the range 800 – 1,200 mm, but tolerates 350 – 1,900 mm.
From the pedological point of view it prefers a good moist soil but without stagnation and grows well in heavy clayey soils and prefers a pH between 4.5 and 6.5, tolerating 4 – 7.
Plants are very shade tolerant, but growth is slower in dense shade conditions.
It is a plant that is intolerant to air pollution and prefers to grow on a north-facing slope.
They are trees that can live for 300 – 400 years.
There are two basic forms of this subspecies, those of the north of the range, which have a vigorous growth in height while the southern form is vigorous in the growth of the circumference.
As for multiplication, these trees should be planted in the open field when they are quite small, between 30 and 90 cm in height. Larger trees root and vegetate poorly and are unlikely to grow for several years. This also negatively affects root development and wind resistance.
Propagation occurs by seed. Sowing should be done in late winter (in a greenhouse in very cold areas) or outdoors in early spring. Germination is often poor, usually taking about 6 – 8 weeks. It seems that the stratification produces a more uniform germination, therefore it is advisable to sow the seed in an unheated seedbed as soon as the seed is ripe in autumn.
The seed remains viable for up to 5 years if well preserved.
The transplantation of young seedlings, which is recommended to be placed immediately after germination in single pots, must be done in the second year of life in the period between spring and early summer and, in any case, after the last foreseen frosts.

Customs and Traditions –
The white fir is a plant that has long been used to make lumber. Today it is used in the wood industry, especially for the manufacture of plywood. Furthermore, its use as a Christmas tree and as an essence for parks and gardens, with specific cultivar forms, is very common.
The crushed leaves of this plant give off a strong lemon scent.
The pitch obtained from the trunk was used as an antiseptic poultice for cuts, wounds, etc.
An infusion of pitch, or bark, has been used in the treatment of tuberculosis.
An infusion of the foliage was used in the body bath to relieve rheumatism.
An infusion of pitch and leaves has been used in the treatment of lung ailments.
Other uses include agroforestry ones.
Abies concolor is a good soil stabilizer and can be particularly useful for road borders.
A light brown dye can be obtained from the bark.
An extract from the leaves, branches and wood is used as an ingredient in commercial cosmetic preparations as a masking agent.
As for its wood this is very light, not strong, coarse-grained, soft, not durable. It is mainly used for pulp, crates, etc. or even for general construction and plywood applications. It is sometimes used for framing small houses, but it is not sturdy enough to be used in larger buildings.
The wood is devoid of a characteristic odor and therefore does not give flavor to the objects stored in it, so it can be used to make trays for storing food.
Furthermore, wood is often used as a fuel, even if it does not have a good yield.
Finally, its state of conservation. Despite intensive exploitation in the past and present, the vastness of the range and its numerous presence in the locations where the tree is present, lead to the classification of Abies concolor as a least concern species in the IUCN Red List.

Preparation Method –
Abies concolor, in addition to forest uses and for its wood, is used in medical and cosmetic applications; among other things, the crushed leaves give off a strong lemon scent.
From the pitch obtained from the trunk, poultices or infusions are prepared.
Pure or mixed infusions with pitch are also obtained from the leaves for various medicinal purposes.