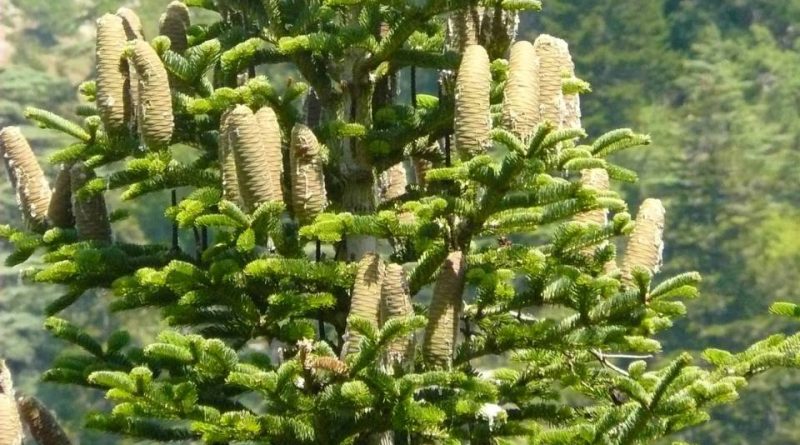 Etymology –
The term Abies comes from Abies which is the classical Latin name (Virgil, Egloghe, from the Sanskrit root abh gush of resin); according to another interpretation it would derive from the Greek word ἄβιος = long-lived.
The specific name cilicica is in reference to Cilicia, an ancient province of the Roman Empire which included the territories of present-day Turkey.

Geographic Distribution and Habitat –
Abies cilicica is an endemic plant of Turkey, Syria and Lebanon.
In its natural habitat it can form pure woods, where the vast majority of the population resides, Syria and Lebanon (northern part of Mount Lebanon) with restricted and fragmented subpopulations. It prefers mountain altitudes between 1,000 and 2,000 m, with annual rainfall between 1,000 and 1,500 mm, with hot and dry summers and humid and not too cold winters. It grows on calcareous, dry, well-drained and sometimes rocky soils. It is often found in association with Cedrus libani, Taxus baccata, and species of the genus Quercus; associations with Pinus nigra and Juniperus excelsa are less frequent.
Unfortunately, over 5,000 years of deforestation, fire and grazing have reduced these forests to enclaves. 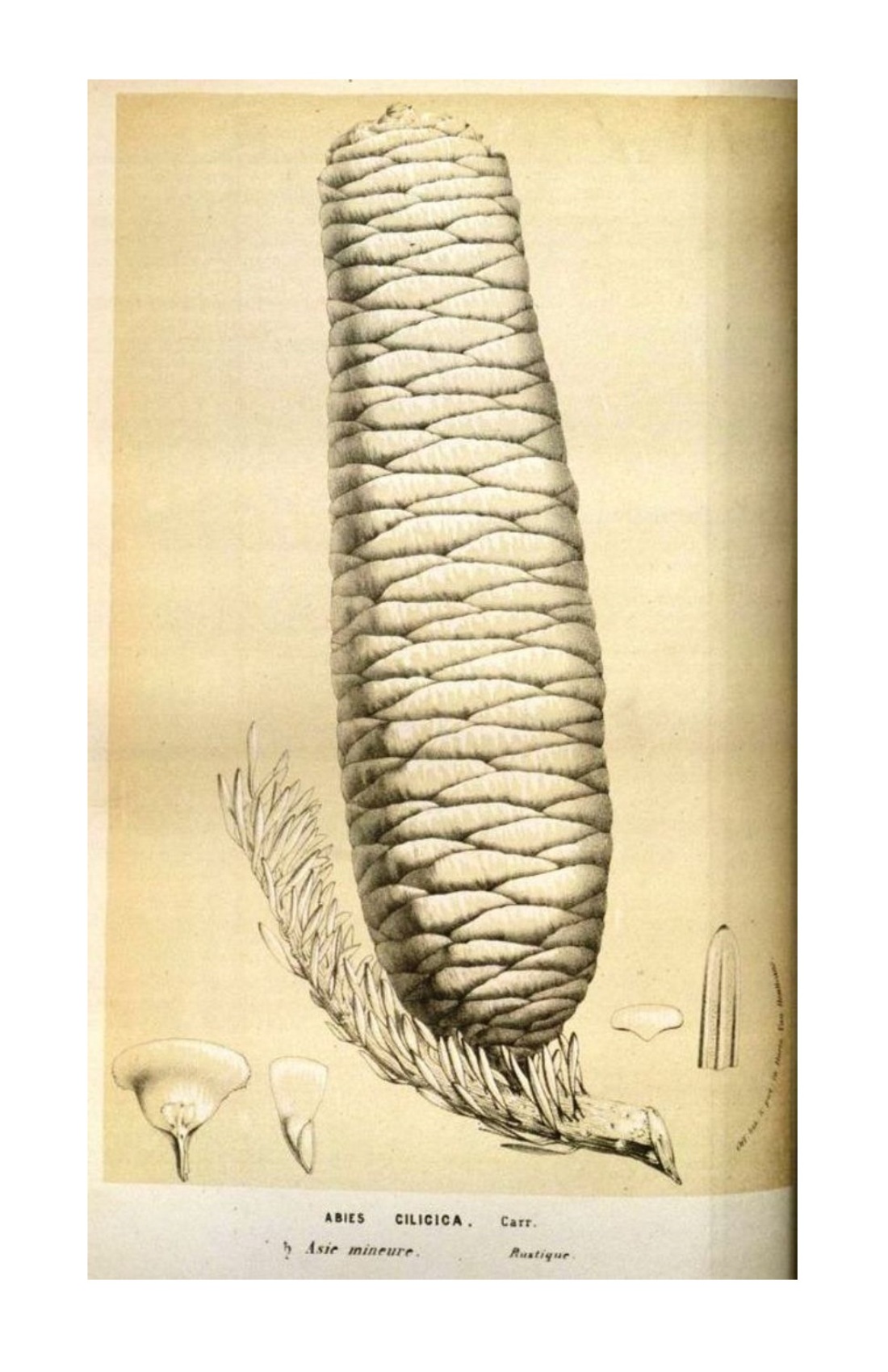 Description –
Abies cilicica is an evergreen tree up to 35 m tall.
The trunk can reach 2 m in diameter, with a conical bearing. The bark is gray-ash and smooth when young; it becomes with age fissured in flakes.
The main branches have an ascending bearing; the secondary branches are yellowish red to olive brown, glabrous.
The buds are ovoid, non-resinous, brown in color; the pearls that cover them are carinated and free at the tip.
It has needle-like leaves, dark green above, whitish green below, up to 4 cm long, with whole or slightly bifid apex.
The female strobili are initially green, brown when ripe, are cylindrical, up to 20 cm long and up to 6 cm broad, sometimes arranged in pairs, with a short peduncle; the scales are fan-shaped, 3 cm long, 3.5 cm wide, smooth.
Male strobili are 1.5 cm long, yellowish with red microsporophylls. The seeds, light brown in color, are up to 12 mm long, in the shape of an inverted egg, with 17 mm light brown wings, cuneate.

Cultivation –
The Abies cilicica is a tree that has been used since ancient times for its wood which is still marketed locally.
In its range it forms mixed woods, sometimes forming pure populations, preferring shallow, rocky and well-drained calcareous substrates; at altitudes between 1,000 and 2,000 meters.
It is a plant of the warm and subtropical temperate zones. Dormant trees are very frost hardy, but spring vegetation is highly prone to frost damage.
The plant prefers shallow, rocky and well-drained limestone substrates.
Plants are very shade tolerant, especially when young, but growth is slower in dense shade conditions.
It is a fast growing tree.
Trees should be planted in their permanent positions when they are quite small, between 30 and 90 cm in height. Larger trees tend to take root poorly, which also negatively affects root development and wind resistance.
Propagation can take place by seed, with sowing in late winter in a greenhouse or outdoors in early spring. Germination is often poor, usually taking about 6 – 8 weeks.
Stratification is reported to produce more uniform germination, so it is probably best to sow the seed in a cold seedbed as soon as it is ripe in the fall.
The seed remains viable for up to 5 years if well preserved.
The transplantation of young seedlings should be carried out in spring or early summer, after the last foreseen frosts.

Customs and Traditions –
The Cilician fir is a plant whose findings certify an ancient use and use.
In 2009 in Berenice Troglodytica, an Egyptian-Roman port on the Red Sea, archaeologists found: “two blocks of Abies cilicica resin, one weighing about 190 g and the other about 339 g, recovered from the 1st – century AD. in one of the port trenches Produced in the areas of greater Syria and Asia Minor, this resin and its oily derivative were used in mummification, as an antiseptic, diuretic, to treat wrinkles, deworming and promote hair growth.
Its wood is still used for the manufacture of plywood. Its use in gardens and botanical gardens is however limited, due to its fragility towards spring frosts.
Ecologically this plant has a relatively wide distribution in Turkey, Lebanon and Syria, although the small subpopulations of the typical subspecies in Lebanon and Syria are both heavily degraded and should be considered critically endangered nationwide. The Mediterranean vegetation of southern Turkey, especially mountainous areas, is considered to be at high risk of climate change, with data clearly showing that summer temperatures are on the rise and annual rainfall has significantly decreased over the past five decades. These trends are creating an increased fire risk and are also contributing to a decrease in the trees’ overall health, which in turn makes them more vulnerable to pathogen attacks. The Taurus Mountains are also seeing a sharp increase in tourist numbers which also increases the risk of forest fires. The plant is currently classified as “near threatened” in the IUCN Red List of Threatened Species (2013), even though its range is vast (estimated at 3,397 km²).

Preparation Method –
Abies cilicica is a plant of remote use not only for its wood but, as archaeological finds have reported, also for its resin and its oily derivative that were used in mummification, as an antiseptic, diuretic, to treat wrinkles, as a dewormer and for hair growth.
Today, after centuries of deforestation and fires, the species is also threatened by global warming for which protection and safeguard interventions are being planned and improper use is not recommended.