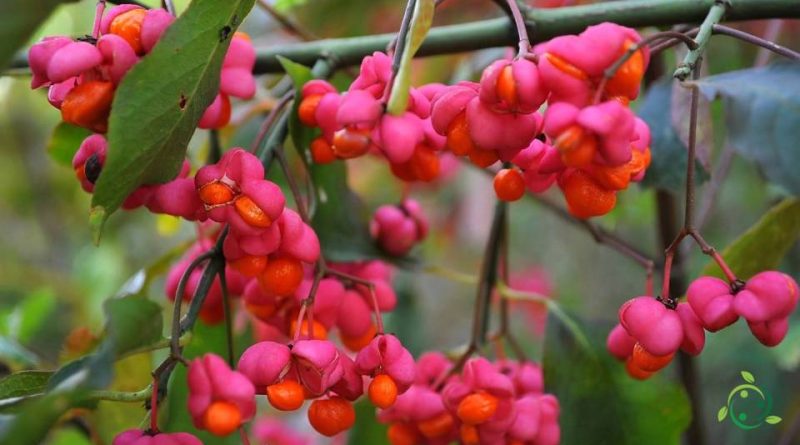 The European spindletree (Euonymus europaeus L.) is a plant of the Celastraceae family native to a large range within Europe.

Suitable breeding habitat –
Euonymus europaeus is a plant native to most of Europe, including Great Britain in the north, from southern and eastern Sweden to Spain, the Caucasus and western Asia.
In Italy it is present in all regions, between the shrub layer of broad-leaved woods or hedges, from the basal to the mountain area; generally between 0 ÷ 800 m, but in Sicily between 400 ÷ 1,300 m a.s.l.
Its habitat is that of forest edges, hedges and gentle slopes, tending to thrive on nutrient-rich soils, limestone soils and poor in salt.

Propagation –
The European spindletree is a deciduous shrub or small tree that grows optimally on well-drained alkaline soils. It is an easily cultivable plant, thrives in almost any soil, including gypsum, and is particularly suited to dry and shady areas.
It is a popular ornamental plant in gardens and parks thanks to its bright pink or purple fruit and attractive autumn hues.
It is a very cold resistant plant that tolerates temperatures down to about -25 ° C.
Propagation occurs by seed; sowing must be carried out immediately after ripening in an unheated seedbed.
Stored seeds require 8 – 12 warm weeks followed by 8 – 16 weeks of cold stratification and can then be sown in seedbeds.
The young seedlings are then placed in individual pots and grown in a greenhouse at least for their first winter.
The transplant in the open field should be done in spring or early summer, in any case after the last foreseen frosts.
It is also possible to prepare cuttings obtained from semi-mature wood, 5 – 8 cm long and propagated in a shaded area in mid-summer.

Ecology –
Euonymus europaeus is a European plant widely naturalized outside its native range.
Its wood is very hard and was used in the past for the manufacture of spindles for spinning wool and for butcher’s skewers.
The charcoal produced from this plant is considered superior by artists due to its strength and density.
Parts of the plant have been used medicinally. However, the fruit is poisonous, it contains, among other substances, the alkaloids theobromine and caffeine, as well as an extremely bitter terpene. Poisonings are more common in young children, who are enticed by the brightly colored fruits. Ingestion can cause liver and kidney damage and even death.
In some countries, such as France, it has been used to stabilize sand dunes.
The whole plant produces a volatile oil which is used in soap making.
In addition, the plant was used, especially in the past, for other uses, such as dyes, as an insecticide and for the production of gutta-percha, present in the roots, a non-elastic rubber used as electrical insulation and for the production of plastic materials.