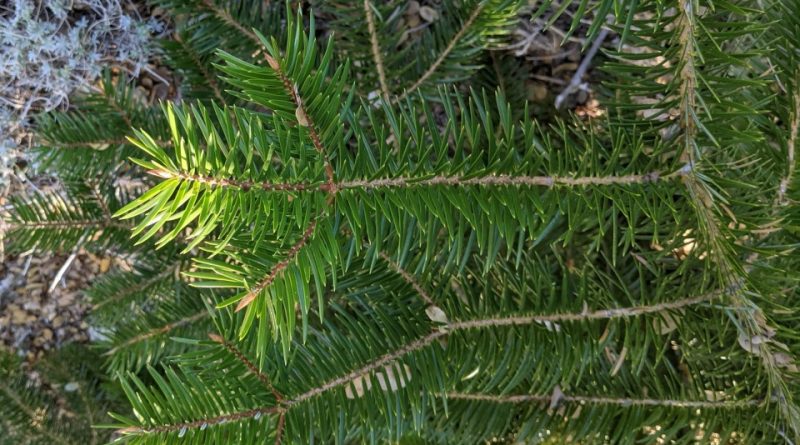 The Santa Lucia fir or bristlecone fir (Abies bracteata (D.Don) Poit., 1845) is an arboreal species belonging to the Pinaceae family.

Etymology –
The term Abies comes from Abies which is the classical Latin name (Virgil, Egloghe, from the Sanskrit root abh gush of resin); according to another interpretation it would derive from the Greek word ἄβιος = long-lived.
The specific epithet bracteata comes from the botanical Latin bractea brattea: that is, provided with bracts, referring to the showy scales of female strobili.

Geographic Distribution and Habitat –
Abies bracteata is a plant native to a restricted area of ​​California, with an area of ​​about 710 km² in the Santa Lucia Mountains which are part of the Californian Coastal Range in the United States of America.
Its habitat is that of rocky slopes and gullies facing north and east where there is no danger of forest fires, at altitudes from 200 to 1,500 m, in a Mediterranean climate with average annual rainfall of 500-1,300 mm; in it it also forms mixed woods with Sequoia sempervirens, Pinus lambertiana and Pinus. 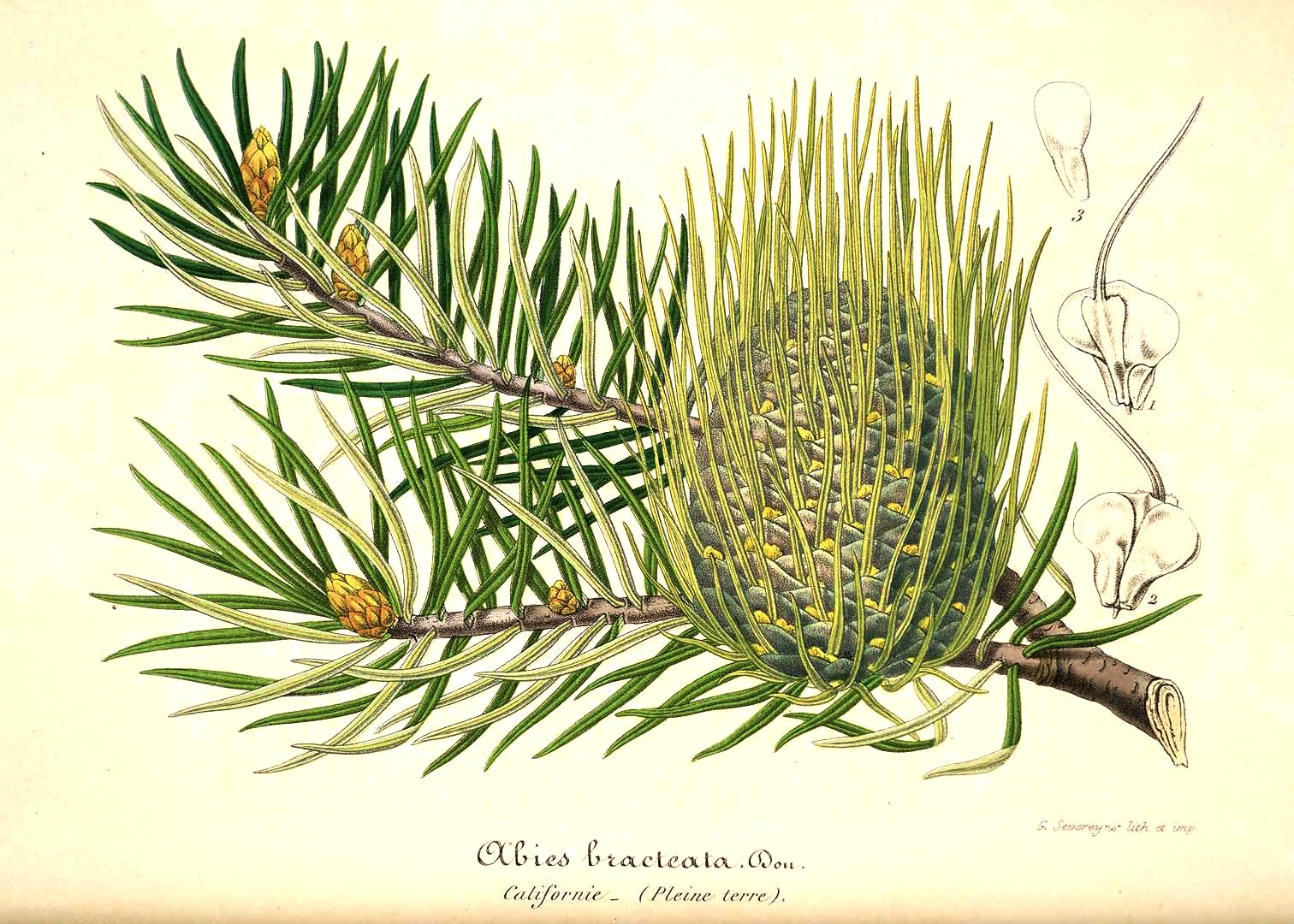 Description –
The Santa Lucia fir is a tree up to 25 m high.
The trunk reaches one meter in diameter and has a conical bearing. It has a red-brown and smooth bark when young which, with age, becomes slightly cracked, breaking into flakes.
The main branches branch off from the trunk at right angles and the lower ones tend to bend downwards with age; the secondary branches are purplish green or brown, hairless.
It has needle-like leaves, green in color, up to 6 cm long, arranged in pairs, which emit a pungent odor.
The brown colored buds are ovate-fusiform in shape, with a pointed apex; The pearls that cover them are short, glabrous, triangular, with an entire margin and pointed apex.
The male strobili, 5-7 cm long, emit a yellowish-green pollen.
The female strobili are purple-brown, ovoid in shape, up to 10 cm long and up to 4 cm broad, with 2 cm scales, smooth and 2.5 cm wide.
The seeds are reddish brown, about 10 mm long, with brown-red wings. At germination, the cotyledons are 7.

Cultivation –
The Santa Lucia Fir is considered one of the rarest firs in the world, being endemic to the Santa Lucia Mountains of California. Within these mountains it is found in scattered groves with an altitude between 182 and 1570 meters, with most of the populations on the slopes facing north and northeast. Above 1370 meters, individuals are occasionally found on the slopes facing south and south-east; these trees can always be traced back to relatively humid and sheltered microsites. Formations below 520 meters are rare and are always found at the bottom of a large canyon, where cold air drainage is important. The lowest altitude specimens are between 182 and 275 meters at Ventana Camp on the Big Sur River.
The presence of these fir trees in this area is linked to the susceptibility of these plants to fire. In this area they were spared from very rare fire conditions.
However, the reduction in the area and the potential long-term possibility of fires or attacks by pathogenic insects puts this species at risk in the future.

Customs and Traditions –
Abies bracteata is a very rare fir which is subjected to a careful monitoring and conservation program.
The widespread nature of fir trees within the Santa Lucia Mountains is mainly due to this tree’s susceptibility to fire injury, although competition with other vegetation and appearance is also important.
Outside its range it is highly appreciated for ornamental use, in gardens and botanical gardens, and in trees.
In some historical documents it is reported that the aromatic resin was used as incense in the first Spanish missions that landed in the area.
From an ecological point of view, Abies bracteata resides in an area which, although fragmented, is entirely contained in parks and protected areas, with a low risk of forest fires. However, the reduced capacity of regeneration typical of the species, makes it considered not very adaptable to possible massive climatic changes, which would put it at risk of extinction. For this reason it is included in the IUCN Red List as a near threatened species.

Preparation Method –
Abies bracteata is a plant that, today, has an exclusively ornamental use in some parks and botanical gardens or in trees.
It is reported that in the past its aromatic resin was used for the preparation of incense.