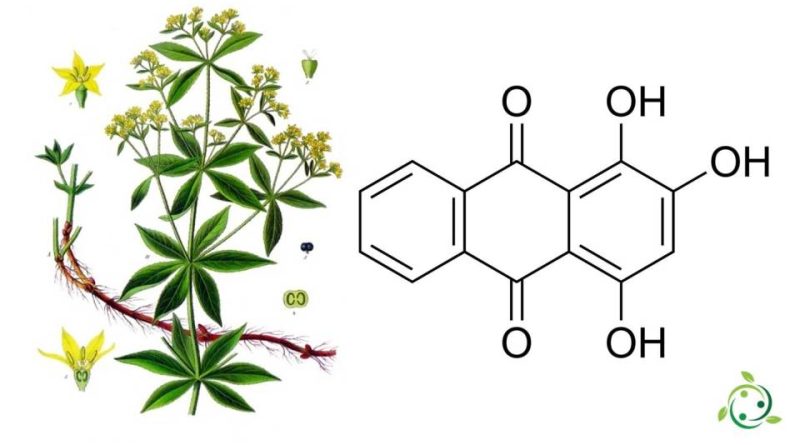 Purpurin, whose term in the official IUPAC nomenclature is: 1,2,4-trihydroxyanthracene-9,10-dione is an organic compound derived from anthraquinone, present as a glycoside in the roots of madder (Rubia tinctorum L.).
Purpurin has a brute or molecular formula: C14H8O5 and, from the physical point of view, it is a red crystalline substance used in the dyeing of cotton, in the preparation of lacquers, as a dye in microscopy, as a reactive in chemistry; furthermore, purpurin is a crystalline solid, which forms orange needles that melt at 259 ° C but turn red when dissolved in ethanol and yellow when dissolved with alkali in boiling water. It is insoluble in hexane but soluble in chloroform and can be obtained from chloroform.
Purpurin is obtained from the root of Rubia tinctorum at least from 1500 BC. and it was already used to dye fabrics.
Historically purpurin and alizarin were isolated from the root by Pierre Robiquet and Colin, two French chemists, in 1826. These substances were identified as anthracene derivatives by Gräbe and Liebermann in 1868. They also synthesized alizarin from bromoanthraquinone, which , together with the conversion of alizarin provided the first synthetic route to purpurin.
The positions of the OH groups were determined by Bayer and Caro in 1874–1875.

The root of Rubia tinctorum, however, contains the colorless glycosides of these coloring substances.
Unlike alizarin, purpurine is dissolved by boiling in a solution of aluminum sulfate, from which it can be precipitated by acid. This procedure can be used to separate the two dyes.
Like many dihydroxy- and trihydroxyantraquinones, pupurin has a purgative action, although only 1/20 is as effective as 1,2,7-trihydroxyantraquinone (antrapurpurine).
Purpurin is a rapid dye for printing cotton and forms complexes with various metal ions. However, it wears off faster than alizarin with exposure to sunlight.
Among other possible uses, a study published in the journal Nature Scientific Reports suggests that purpurine could replace cobalt in lithium-ion batteries. In this sense, eliminating cobalt would mean eliminating a dangerous material, allowing the production of batteries at room temperature and reducing the cost of recycling batteries. Extracting purpurin from farm madder is a simple task; alternatively, the chemical could be synthesized in the laboratory.