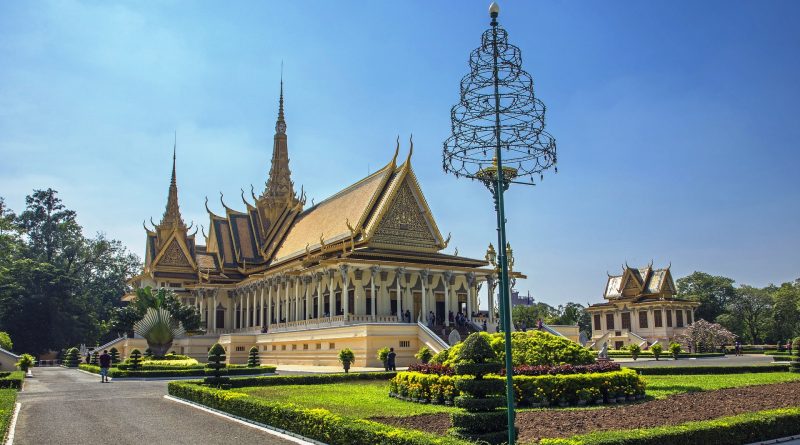 Cambodia is a Southeast Asian state that borders Thailand and Laos to the north, Vietnam to the east and south, the Gulf of Siam to the south, and the Gulf of Siam and Thailand to the west.
From a political point of view, Cambodia is a constitutional monarchy, with Buddhism as an official religion and most of the population practices the Theravada doctrine.
Cambodia has an area of ​​181,035 km² and has a population of 14,494,293 inhabitants (2009).
The capital is Phnom Penh, with a population of 2,282,000 (2019).

Geography –
Cambodia, geographically, is located in the southeastern portion of Indochina.
This region corresponds to the lower Mekong basin and the Tonle Sap depression, a vast river fill region bounded towards Thailand and the Gulf of Siam by bas-reliefs, namely the Dângrêk Mountains and the Cardamom Mountains, while to the east the last offshoots of the Chain Annamita separate it from the South China Sea.
The highest peak in Cambodia, with its 1,813 meters, is Phnom Aural, which is part of the Cardamoms.
Cambodia borders Thailand to the north-west for about 800 km, to the north with Laos for about 541 km and to the east with Vietnam for over 1,200 km. This country also has 443 km of coastline on the Gulf of Siam, in the south of the country.
The state border includes for the most part the catchment areas of national rivers, with the exception of the eastern border with Vietnam, not established according to geographical criteria but according to the political events that have occurred since the colonial period. Relations between the two countries have gone through moments of open tension, however governments have addressed the border issue by forming study commissions and signing diplomatic treaties already in the early 1980s, when the pro-Vietnamese regime of the People’s Republic of Kampuchea was established. Following the agreements of October 2005 (based on a treaty of December 1985), a vast operation of laying border signals has begun. The completion of the works was scheduled for 2012.

Climate –
The climate of Cambodia is typically that of the monsoon area, some local factors also affect the country’s climate such as the proximity to the equator, which tends to prolong the rainy period, and the peripheral presence of high lands that somewhat shelter the central depression. where there are moderate rainfall values, less than 1,500 mm per year (annual average of Phnom Penh: 1125 mm).
In Cambodia the rainy season runs from May to October (overcast skies, moderately high temperatures); the maximum rainfall is concentrated in October, when 2/3 of the rains fall. The dry season runs from November to February, with a minimum of rainfall in February. There is good weather and relatively cool temperatures, which tend to increase significantly until the second half of May when, as the rainy season approaches, they become torrid. The peripheral plateaus have different climatic conditions: cooler temperatures and above all a more widespread and abundant humidity, with rainfall exceeding 2,000 mm, and a dry season reduced to 3 months. The Cardamomi mountains, directly exposed to the southwest monsoon, receive rainfall of more than 5,000 mm on their maritime slopes, one of the highest values ​​in the monsoon area. 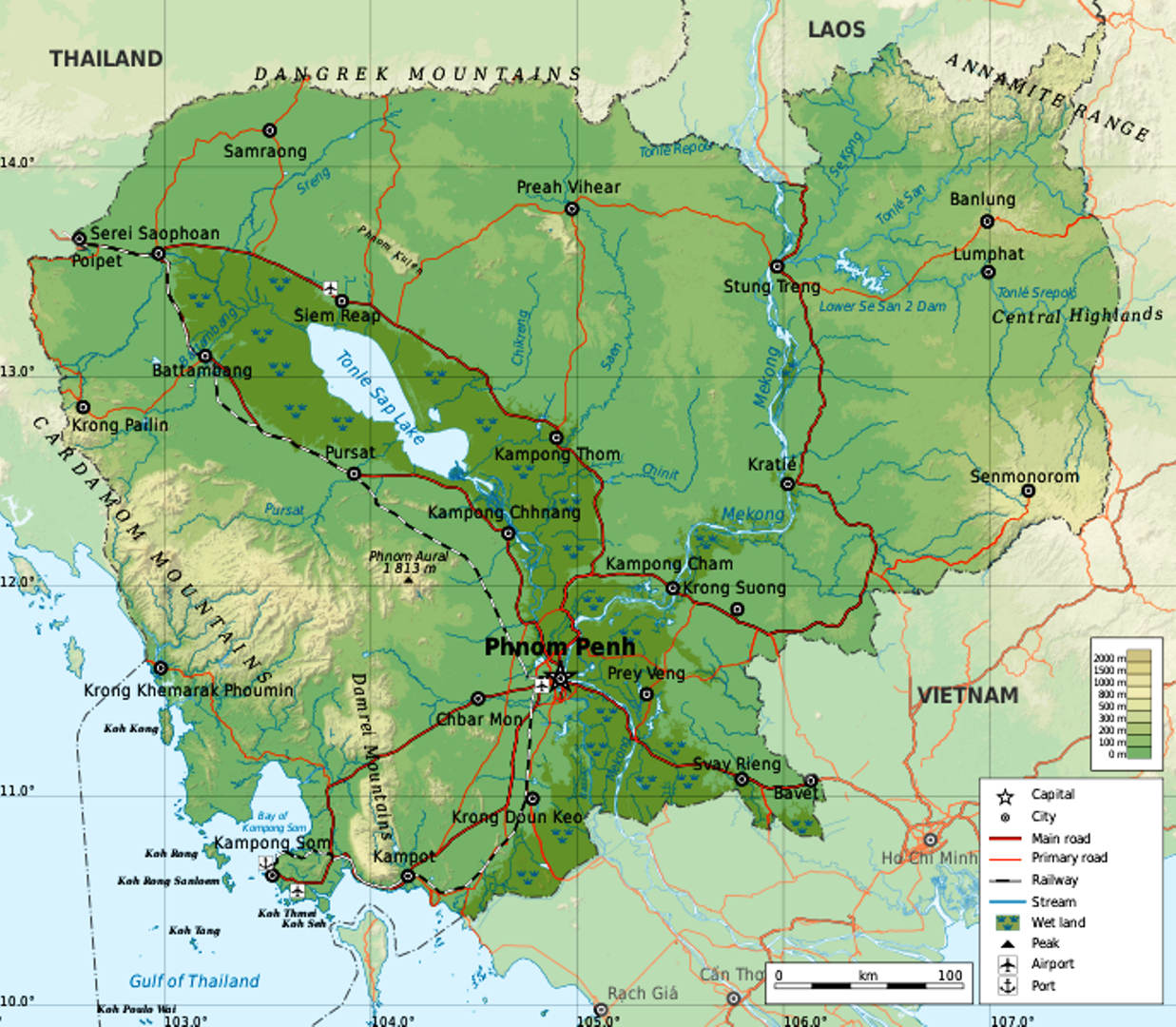 Flora-
Like many other countries in Cambodia, even though forests still cover 60% of the land, primary rainforest coverage dropped dramatically from 73% in 1965 to 3.1% in 2005; this is due to illegal logging and the rapid development of the country.
Rivers and marshes cover 3% of the country’s surface, while the arable land corresponds to 20.5%, but not all of them are cultivated. Over 70% of Cambodian territory is covered by the great jungle; its relative conservation is due to the tenuous demographic expansion of the country: it is estimated that only 10% of Cambodia’s surface is actually cultivated, while the rest is made up of completely uninhabited regions. The deciduous tropical forest or “jungle” is home to typical plant species, such as teak, suitable for a climate in which a rainy season alternates with a dry one. On the slopes of the Cardamoms, instead, we pass to the evergreen forest, where however the intervention of man who has been practicing itinerant cultivation for centuries has caused a large degradation that leaves more and more space for the savannah. Finally, the swampy forest extends into the uncultivated parts of the Cambodian depression. In most cases, the soil of the peripheral areas of the country is lateritic, that is, coming from the superficial decomposition of the rocks: they are therefore poor soils, which have never favored agricultural settlement. In contrast, the decaying basaltic soils extending over the southeastern highlands are particularly fertile and lend themselves to rubber tree plantations. The vital region of Cambodia is the Tonle Sap depression where alluvial soils extend, enriched each year by floods.
It should also be considered that the flora of the lower areas of the country is conditioned by agriculture: the main feature of the landscape is rice, as well as other cereals such as tobacco and maize. In the northern part of the country, dominated by the hills, there are evergreen forests. In the southwest of the country there are stretches of primary forest and teak. Teak is a very common tree in Cambodia despite not being native to the region, but it was imported in the 17th century and is important and valuable as a source of water resistant wood. Also in this region, pines grow at higher temperatures. Mangrove forests are found along the 440 kilometers of coastline, while the Cambodian lotus is commonly found along inland rivers, also found in China and India and is considered sacred and traditionally associated with the Buddha.

Fauna –
In recent times, fauna has also been affected by the reduction and loss of habitat.
However, many large species can still be found in the countryside which are becoming increasingly rare in the rest of the world; elephants, leopards, tigers and wild oxen are not unusual. In addition, rare Irrawaddy dolphins can be seen in the waters of the great Mekong River near the village of Kampi (Kratié province). The war that began in 1970, US bombing and poaching caused large-scale environmental damage by dramatically decreasing the wildlife population. Cambodia’s most unusual animal is the kouprey, a species of ox discovered in 1937 that has become the country’s symbolic animal and is now nearly extinct. Cambodia is home to a rich and diverse bird population, including pelicans, ardeidae, herons, cranes, tropical parrots, and kingfishers. Also common are cormorants, pheasants, grouse and, especially in the Tonlé Sap area, species of fishing birds, especially present when the floods bring a large quantity of fish into the lake. Snakes are also very common in Cambodia, and there are four particularly deadly species: the cobra, the king cobra, Russell’s viper and the banded bungaro.