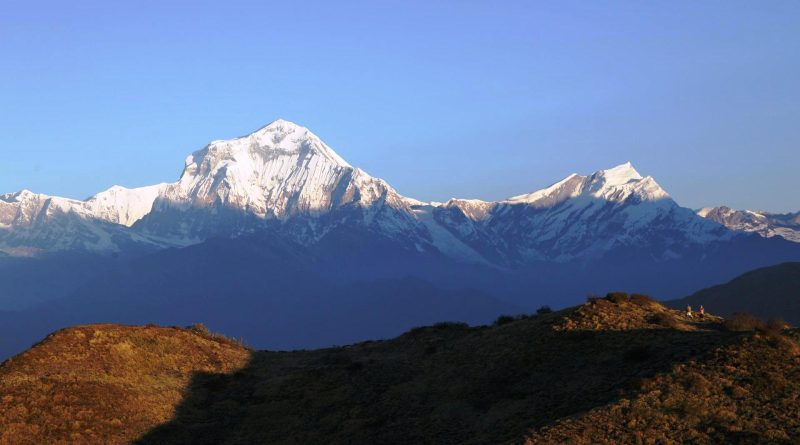 Dhaulagiri, a word which in the local language means White Mountain, is a Himalayan mountain range.
Dhaulagiri is the seventh highest mountain in the world with its 8,167 meters above sea level and is the highest mountain within the borders of a single country (Nepal).
This peak was first climbed on May 13, 1960 by a Swiss-Austrian-Nepalese expedition.
Annapurna, with its 8,091 m is located 34 km east of Dhaulagiri. The Kali Gandaki River flows between the two into the Kaligandaki Gorge, which is said to be the deepest in the world.
The city of Pokhara is located south of Annapurna, an important regional center and the gateway for climbers and hikers who visit both mountain ranges as a tourist destination in their own right.

Geography –
Looking north from the plains of India, most of the 8,000-meter peaks are obscured by the nearest mountains, but in good weather, Dhaulagiri is evident and visible from northern Bihar and all the way to Gorakhpur in Uttar Pradesh.
In 1808, the calculations of the relief showed that it was the highest mountain ever recorded. This lasted until 1838, when Kangchenjunga took its place, followed by Mount Everest in 1858.
The sudden rise of Dhaulagiri I from lower ground is almost unparalleled. It rises 7,000 m from the Kali Gandaki River 30 km south-east. The south and west walls rise precipitously for over 4,000 m. The south face of Gurja Himal in the same massif is also remarkably immense.

History –
The was discovered in 1808 and was believed, as mentioned, for about 30 years, until the discovery of Kangchenjunga, the highest mountain on Earth.
Dhaulagiri is a massif consisting of 10 peaks, which are:
– Dhaulagiri I 8,167 m;
– Dhaulagiri II 7,751 m;
– Dhaulagiri III 7,715 m;
– Dhaulagiri IV 7,661 m;
– Dhaulagiri V 7,618 m;
– Churen Himal (Central) 7,385 m;
– Churen Himal (East) 7,371 m;
– Churen Himal (West) 7,371 m;
– Dhaulagiri VI 7,268 m;
– Putha Hiunchuli 7,246 m;
– Gurja Himal 7,193 m.
The story of the ascents to this peak begins on May 13, 1960 with a Swiss / Austrian expedition led by Max Eiselin, together with Kurt Diemberger, Peter Diener, Ernst Forrer, Albin Schelbert, Nyima Dorji and Nawang Dorji. It was the first Himalayan expedition supported by a plane, but it crashed on the approach. The plane, a Pilatus PC-6, was later abandoned on the mountain.
The first female ascension was made by Lutgaarde Vivijs on May 6, 1982, as part of a Belgian expedition, along the normal route.
The first winter ascent was made on January 21, 1985 by Jerzy Kukuczka and Andrzej Czok, part of a Polish expedition, along the normal route.
Over time, however, there have been various climbs and attempts and, unfortunately, even some deaths.

Flora –
The difference in climatic conditions in this region is responsible for its diverse flora and fauna. The Dhaulagiri region possesses a variety of flora and fauna. The vast massif covers the Dolpo to the north-west, following the river upstream, ferns and forests of oaks and other broad-leaved trees and juniper forests. The mountain sides full of rhododendrons are colored with color during the spring. Many species of flowers are found in abundance on the trail, even in the high mountain passes above the treeline, small alpine flowers can be found dotting the windswept terrain. This trans-Himalayan region is quiet, peaceful and full of this area is relatively surrounded by nature full of peace and tranquility. Sparse vegetation is found up to 4,500 meters.

Fauna –
The region around Dhaulagiri is also home to some of Nepal’s most beautiful animals. There are reports of many endangered species residing in this area, including the elusive snow leopard. Although rare, the snow leopard and the Danphe bird are highly sought after among visitors. This place is one of the few truly wilderness areas accessible to hikers in Nepal.