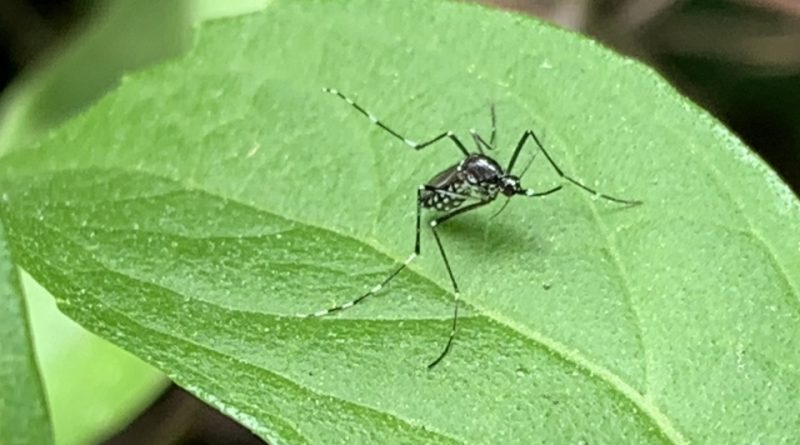 The tiger mosquito (Aedes albopictus Skuse, 1894) is an insect belonging to the Culicidae family.

Geographic Distribution and Habitat –
Although Aedes albopictus is an indigenous species in tropical and subtropical areas, it is rapidly adapting to colder regions as well.
This insect, in particular, is native to Southeast Asia but exploiting human commercial transport it has spread to many areas of the world: in the mid-twentieth century it spread to Africa and the Middle East and later to the South American continent, the United States. of America, in Oceania and lastly in Europe.
The first specimens reproduced in Europe were found in Laç, northern Albania in August 1979. The Albanian surveillance group hypothesized that the mosquito had been present at least since 1975 and identified the responsible means in a cargo ship from China docked. at the port of Durres.
In Italy it made its appearance in 1990 in Genoa, in a warehouse of used tires imported from the United States. From here it spread practically throughout the peninsula and is present in many other European countries.
Aedes albopictus is included in the list of the 100 most harmful invasive species in the world drawn up by the IUCN / ISSG.
In warm and humid tropical areas it is active all year round while in temperate regions it hibernates in the form of eggs, resuming the cycle in adult form during spring (in Italy it is active from March to October).
The eggs of varieties found in temperate zones tolerate cold (sub-zero temperatures, snow) better than those found in warmer regions. Furthermore, adult specimens can survive the winter in suitable micro habitats.

Morphology –
The tiger mosquito is an insect that measures from 5 to 10 millimeters in length with the males that are distinguished from the females as they are about 20% smaller even if they have a very similar morphology.
It has a showy black and white stripes.
Like all species of mosquitoes, the antennae of males are much denser than those of females.
The maxillary palps of males are longer than their trunks; instead the maxillary palps of the females are much shorter.

Attitude and Life Cycle –
Aedes albopictus is diurnal and carries out its activity mainly in the late afternoon and early morning.
It is also anthropophilic as it has a marked preference for mankind. It is the most represented species in urban environments, where it finds many places suitable for its reproduction and numerous guests on which to dine.
The females lay their eggs on the walls of containers of various kinds capable of containing water. They prefer small and dark places that simulate their natural environment, represented by small cavities present in the trees of the tropical forests where they come from. In urbanized environments, their choice falls on all those small containers present in gardens and terraces (small amphorae, saucers, rainwater collection pits, gutters, games for children, watering cans), but also along the streets, in parks , squares and streets.
The eggs resist drought and can survive over 6 months in these conditions, but to hatch and thus start the larval cycle they must necessarily be submerged by water. The life cycle consists of 4 distinct phases: egg, larva, pupa and adult. Larvae and pupae can develop only and exclusively in the presence of water. The tiger mosquito has a limited range of action (less than 200 meters), so its spawning sites are close to where its presence is observed.
The life cycle of Aedes albopictus is similar to that of other mosquitoes.
A few days after a single blood meal, necessary for the maturation of the eggs, the females look for a suitable site for oviposition, usually consisting of the internal walls of a container containing or that has contained stagnant water. Most of the eggs are laid a few millimeters higher than the existing surface of the water, where they remain waiting for a level rise. Each female can lay up to 100 eggs (on average about sixty) for each gonotrophic cycle, taking care not to lay them all in the same outbreak. In the most favorable periods from the climatic point of view, the cycle repeats itself every 3-5 days. Each specimen usually lives from 2 to 4 weeks, stinging and oviposing numerous times.
Hatching occurs when the eggs are submerged, for example during a rain. Eggs are able to survive long dry periods in a quiescent state. As for other mosquitoes, aquatic larvae are born from the eggs which, through 4 stages of growth, separated by moults, reach the pupal stage. The adult mosquito flickers after about 48 hours, leaving the pupa’s shell (exuvia) in the water. In our latitudes the entire development cycle can last from 10 days to several weeks, depending on the temperature.
About 48 hours after the flicker, males and females are able to mate. Immediately afterwards, the female can have her first blood meal, while the male, having exhausted his reproductive function, will survive only a few days during which he will never feed on blood. Both males and females derive the energy necessary for their life from sugary juices of vegetable origin.