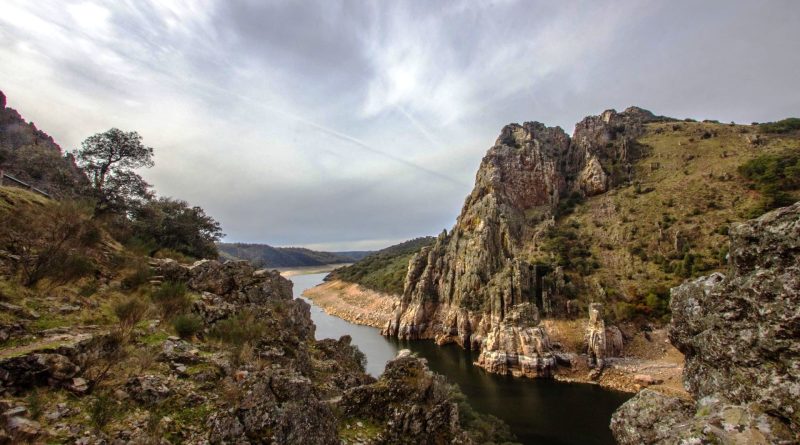 Monfragüe National Park, whose WDPA Code is: 4820, is a national park located in Extremadura, Spain.
This park has a land area of ​​181.18 km².
The Monfragüe National Park is a natural area located in the province of Cáceres, an autonomous community of Extremadura. Two rivers, the Tagus and the Tiétar, run through the park. This area was declared a natural park on April 4, 1979 and a national park on March 2, 2007. With 288,644 visitors in 2015, Monfragüe was the twelfth national park in Spain by number of visitors.
Monfragüe derives from the name given by the Romans as mons fragorum (dense mountain). In the small hermitage, next to the castle, is preserved the sculpture of the Virgin of Montfragüe, from the 17th-18th century, an image brought from Palestine by the knights of the Order of Santiago. She is the patroness of Torrejón el Rubio, although she is also revered in Serradilla, Malpartida de Plasencia and Riolobos. Each of these villages, every year, celebrates its particular pilgrimage to ‘Monte-Fragoso’.

Geography –
Monfragüe is located in the west of the Iberian Peninsula and belongs entirely to the province of Cáceres in the region of Extremadura which is an autonomous community in the southwestern part of Spain, where Extremegno (or Extremaduran) Spanish and Portuguese are spoken, as well as to some dialects, including Leonese and Fala. The name of the region probably derives from the same root, given by the fact that it was a frontier region of Christianity during the Reconquista, at the end marked by the river Duero (“Extrema Duris”). It includes the provinces of Cáceres and Badajoz which are some of the most important cities in the region, and by size, of Spain.
The most important cities are: Cáceres, Badajoz, and Mérida, the capital of the autonomous community. Extremadura borders Castile and León to the north, Castile-La Mancha to the east, Andalusia to the south and Portugal (Alentejo and Centro regions) to the west. It is an important area for wildlife, especially for the large Monfragüe nature reserve [2].
The Monfragüe National Park area extends through the municipalities of Serradilla, Jaraicejo, Malpartida de Plasencia, Serrejón, Toril and Torrejón el Rubio in the province of Cáceres. The Biosphere Reserve has seven other municipalities: Casas de Millán, Casatejada, Deleitosa, Higuera de Albalat, Mirabel, Romangordo and Saucedilla.

Climate –
The climate of the Monfragüe National Park area is Mediterranean, except for the northern part of the area where the climate is continental, i.e. with colder winters and very hot summers, and for the western part, where the climate it is influenced and made milder by the Atlantic Ocean. Generally, the summers are very hot and dry, with severe drought problems, and the winters are long and mitigated by the proximity of the Portuguese Atlantic coast.
The average annual temperature fluctuates between 16 and 17 ° C, with lower temperatures in the northern area, gradually increasing as they descend towards the south. The lowest temperature is recorded in Sierra Morena due to the altitude.
In summer, the average July temperature is higher than 26 ° C, with peaks as high as 40 ° C. The average winter temperature is 7.5 ° C, lower in mountainous regions. Snowfalls, usually in January and February, reach 40 cm. 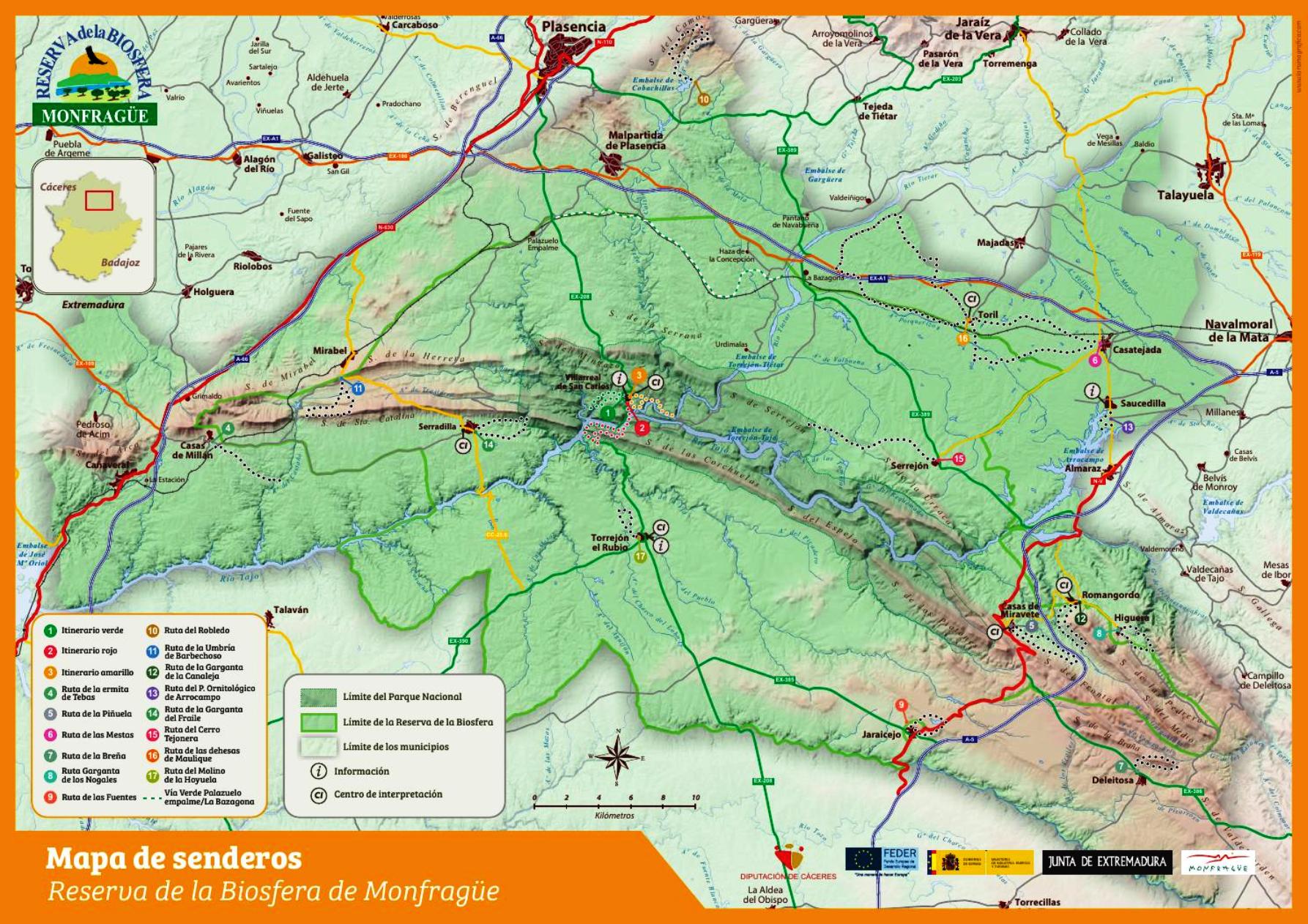 Fauna –
Within the Monfragüe national park live more than 200 species of vertebrates that reproduce in it; many others hibernate or may be seen passing by while migrating to other latitudes. Birds are the vertebrate group with the greatest abundance of species and individuals. The area was declared a ZEPA in 1991.
Among the birds we find: Black vulture (Aegypius monachus) –with 286 pairs5–, imperial eagle (Aquila adalberti) –with 12 pairs–, black stork (Ciconia nigra) –with 30 pairs–, griffon vulture (Gyps fulvus) –with 500- 600 pairs– eagle owl (Bubo bubo), Iberian imperial eagle (Aquila adalberti), Golden eagle (Aquila chrysaetos) –with 6 pairs–, Bonelli’s eagle (Hieraaetus fasciatus) –with 7 pairs–, Egyptian vulture (Neophron percnopterus) –with 35 pairs–.
Carnivores include otter, mongoose, stone marten, wild cat, badger, genet and the most abundant of all, fox. Deer, wild boar and rabbits abound. Other much more discreet mammals are dormice or horseshoe bats (Rhinolophus euryale, R. ferrumequinum and R. mehelyi).
Among the fish live in the park the barbel comizo, the chub and the carp.
Among the reptiles: the bastard snake, the horseshoe snake, the leprous marsh turtle and the ocellated lizard.
Some amphibians also live in the park such as: Gallipato, southern frog, fire salamander, natterjack toad, Iberian midwife toad, Iberian newt.