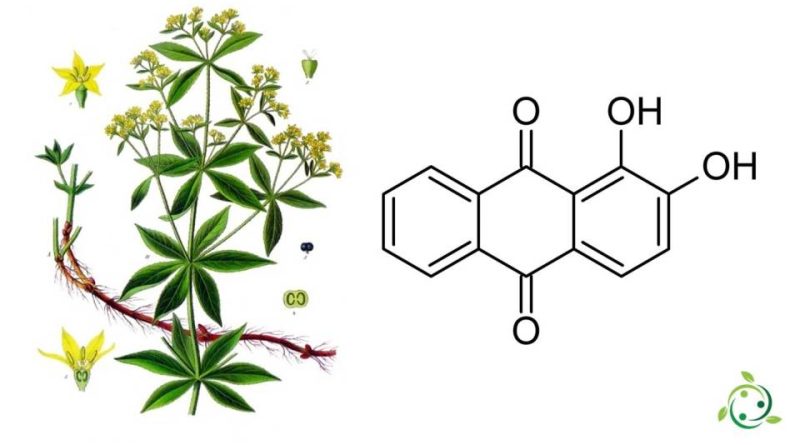 Alizarin, whose term in the official IUPAC nomenclature is: 1,2-dihydroxy-9,10-anthracenedione is an organic molecule with a 9,10-anthraquinone structure with two hydroxyl substituents in positions 1 and 2.
The structure of the molecule and its complexes is not easy to describe in detail, as numerous ketoenolic tautomeries or binding isomeries are possible whose overall effect can also have significant influences on the coloring properties of the tint.
From the physical point of view it appears as a red-orange colored powder, insoluble in water, forming colored, stable, insoluble metal derivatives, called lacquers. It is widely used in dry cleaners as a mordant dye, as a reactive, as an indicator and as a raw material for some medicines (purgatives).
Alizarin has a brute or molecular formula: C14H8O4 and is a red dye extracted in ancient times from the root of Rubia tinctorum and present in other plants. The word alizarin comes from the Arabic al-usara, which means juice.
The groups responsible for the red color are the two hydroxyls and the carbonyls, i.e. its chromophores groups. The ultraviolet / visible spectroscopy of the molecule allows to describe the microscopic properties responsible for the macroscopic properties such as what are the transitions responsible for the coloration of the molecule. The spectrum essentially shows two bands, the first due to π-π transitions in the range 200-300 nm and another also due to π-π transitions at about 450 nm. The first band, being in the ultraviolet, does not make significant contributions to the coloring, while the position of the second band (450-500 nm), being in the visible range, sometimes determines the coloring of the molecule in a peculiar way. It is precisely the position of this latter band, which if modified due to the coordination of the bite, leads to a significant variation in the coloring of the molecule.

It was in 1826 that the French chemist Pierre Jean Robiquet discovered that alizarin was the main component of madder lacquer, along with quinizarin and purpurin. It should also be remembered that alizarin was the first natural dye to be reproduced synthetically, in 1858.
In industrial synthesis, alizarin is obtained by sulfonating anthraquinone and melting the sodium salt of anthraquinonsulfonic acid with soda and chlorate.
However, the synthetic form, unlike the natural one, has a more defined and reproducible color as in the extraction and processing process the impurities often led to differences in the composition and therefore in the coloring. Due to its weak ability to bond to a pictorial or textile support it is mainly used in the form of its complexes with various metals including iron, copper, magnesium oxide, aluminum, these complexes have a chelated structure in positions 1,9 or 1 , 2 of the ring. The effect of coordination is observed in the modification of energy levels between the outermost orbitals, leading to a modification of the color from red to blue depending on the metal used.
Over time, alizarin, especially in the field of painting and dyeing leather, has been almost completely replaced by other more light-stable dyes (for example quinacridone) while it finds current applications in analytical chemistry for the determination of some metals through complexation. In the future it could play a very important role in the manufacture of DSSC photosensitized dye solar cells.
Alizarin is also used in geology, as a dye, to indicate the presence of calcium carbonate minerals (calcite and aragonite).